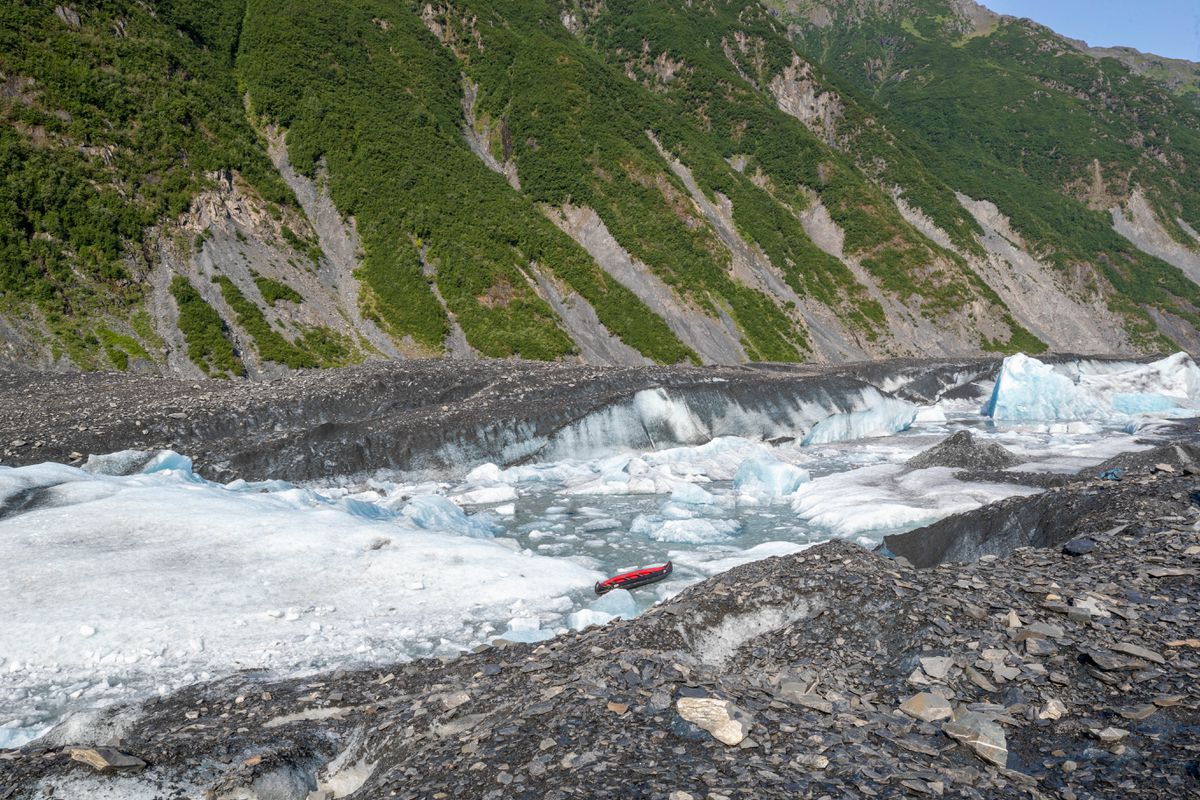 A glacier tour guide spotted an abandoned inflatable canoe at the toe of Valdez Glacier shortly before finding two German tourists and an Austrian dead nearby on July 30, 2019. (Photo by Zach Sheldon)

A glacier tour guide spotted an abandoned inflatable canoe at the toe of Valdez Glacier shortly before finding two German tourists and an Austrian dead nearby on July 30, 2019. (Photo by Zach Sheldon)

The toe of Valdez Glacier, where the bodies of three boaters were found this week, had become particularly dangerous, said a guide who had altered his own tour route due to the glacier’s increasing instability.

The bodies of Maria Elisabeth Schröer, 68, and Albrecht Paul Thomas Schröder-Schröer, 67, a married couple from Germany, were found near an overturned inflatable canoe Tuesday morning. The body of 62-year-old Manfred Brida, an Austrian investigators believe was acting as a guide for the couple, was found with them, said city spokeswoman Sheri Pierce.

Authorities had previously said all three were German tourists.

Police haven’t said how the trio died, but one of the bodies, found floating in the middle of a channel, had “significant head trauma,” Pierce said. The water around them was filled with icebergs and glacial slush, she said.

Pierce has said it’s possible the trio’s canoe was upset by a calving, or shedding, piece of ice. Although all three were wearing life jackets, none was wearing a wetsuit to protect against the frigid water, she said.

“If that was the situation, and they were knocked out of the boat, it would have been difficult for them to get back in,” Pierce said.

Zach Sheldon, who owns the Valdez-based Alaska Guide Co. and discovered the bodies, said the area they were found wasn’t safe. The western side of that glacial lobe had been showing signs of calving within the past few days.

If the canoe had been just 30 lateral feet away, it would have been in a safer area, he said.

Sheldon said he’s never seen anyone injured by calving ice, but wrote in an email that Valdez Glacier has been unusually unstable this year and will become even more so as it retreats from the lake at its toe.

“I pay very close attention to the glacier, documenting it thoroughly, and it has become increasingly more unstable this year, breaking down this summer to a point I didn’t expect to see for another 4-5 years,“ Sheldon wrote. “Much of the floating part of the glacier is active and dangerous.”

The increasing instability of the glacier had prompted Sheldon to suspend his normal tour route, which would have taken guests inside the ice caves below.

He’d watched the glacier calve in that area just the evening before, he said, but didn’t see anyone else nearby at the time.

Sheldon was leading two guests on a walking tour of the glacier’s terminus when he spotted the canoe 100 to 150 feet away in the water below. He said he told the guests to stay behind, then went to get a closer look.

“There were some objects out there that I couldn’t identify,” Sheldon said.

Those objects turned out to be a scattering of debris: paddles, the pump for the canoe — and two bodies trapped behind an iceberg.

When emergency responders arrived, hampered by the treacherous conditions near the glacier, they found a third body. It took four hours to recover all three.

The bodies have been sent to the State Medical Examiner Office for a determination of the cause of death.

Pierce said this is the first fatality she knows of that’s happened at Valdez Glacier in at least 30 years.