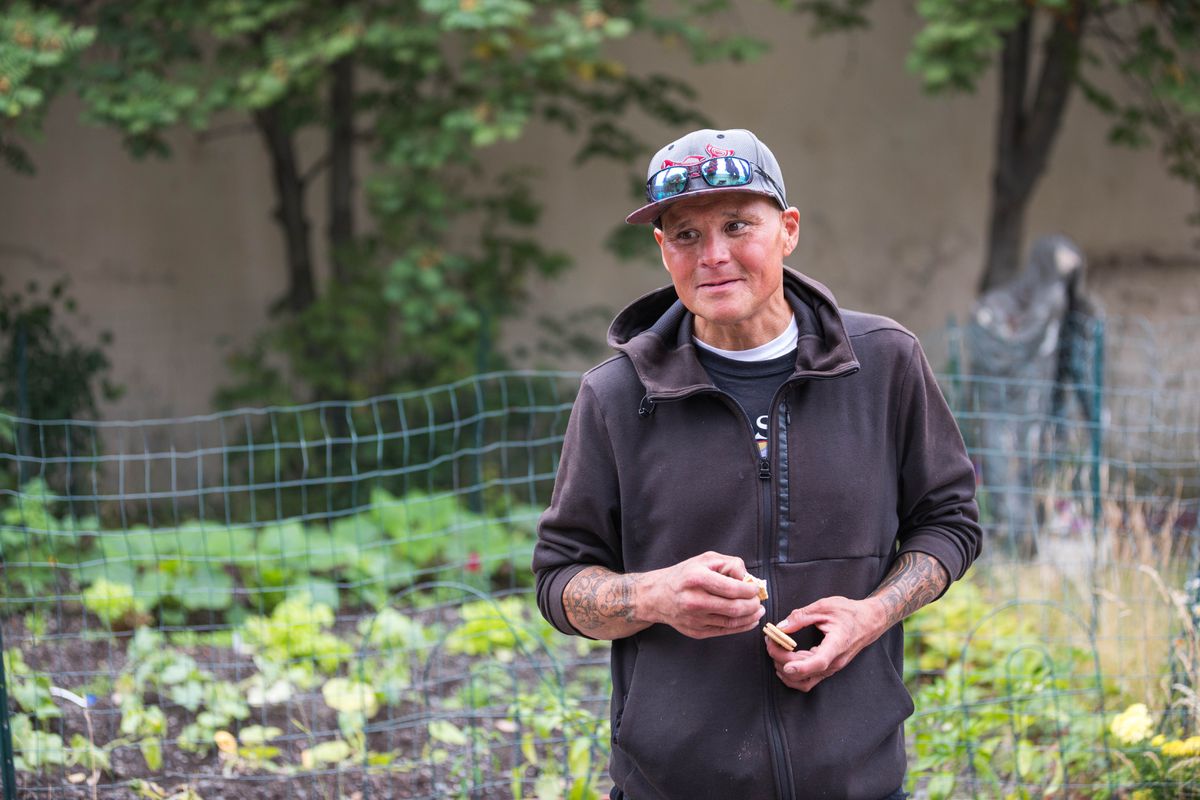 William Segura eats a cookie on Thursday, Aug. 1, 2019 at the Alaska Mental Health Consumer Web. Segura, who says he has been homeless for four years, appreciates the services that the Web provides. "It's hard to get things turned around on the streets, when you don't have a shower or proper rest," he said. "When you're hungry, your main focus is on finding food." (Loren Holmes / ADN)

William Segura eats a cookie on Thursday, Aug. 1, 2019 at the Alaska Mental Health Consumer Web. Segura, who says he has been homeless for four years, appreciates the services that the Web provides. "It's hard to get things turned around on the streets, when you don't have a shower or proper rest," he said. "When you're hungry, your main focus is on finding food." (Loren Holmes / ADN)

Alaska’s safety net for the mentally ill, especially for those with severe mental illness living on and off the street, was frayed before the state plunged into a fight over spending levels. Gov. Mike Dunleavy’s budget vetoes will cut deeply into what remains.

History has shown that removing housing, health care access and other support will lead to more mentally people living on the streets, in turn, putting pressure on police and jails, providers, advocates and police said this week. Many were struggling to make sense of the governor’s cuts to homeless services, Medicaid, and behavioral health, which add stress to a system many say is at a breaking point already.

Even before the cuts, Alaska’s one psychiatric hospital was in turmoil, the state’s only psychiatric emergency room was perpetually full and Anchorage’s emergency departments were overflowing with mentally ill patients, some of whom ended up in jail cells because there was nowhere else for them to go. Alaska Psychiatric Institute is presently operating at roughly half capacity.

“The crisis we’re experiencing right now is like no other,” said Renee Rafferty, regional director of behavioral health for Providence Health Services Alaska.

Roughly 110,000 Alaska adults experience a mental illness, according to The Alaska Mental Health Trust Authority, which is similar to a private foundation that serves Alaskans with mental illness and other disabilities. Mental illness is also a major contributor to homelessness and substance abuse here. Nationally, about half the homeless population suffers from mental illness. A quarter suffer from serious mental illness.

The cuts have the potential to mean a loss of treatment services, as well as basic things like access to food and housing, Allison Biastock, trust spokeswoman wrote in an email.

“Without these basic services, beneficiaries are at increased risk of poor health outcomes, destabilization, homelessness, contact with law enforcement, psychiatric hospitalization and/or incarceration. Similarly, a reduction in housing/homelessness funding places our most vulnerable beneficiaries at severe risk,” she wrote.

Dunleavy’s spokesman Matt Shuckerow did not respond to a request for comment on this story. The governor made $444 million in cuts with his veto pen in June, including $6.1 million in behavioral health treatment grants, an 85% reduction in grants for homeless services, from $14.1 million to $2.6 million, and $129 million in Medicaid cuts, according to the Legislative Finance Division. He has said the cuts are necessary to bring state spending in line with revenue.

A majority of legislators in both houses voted to override his $444 million in vetoes, but the effort failed when they fell short of the three-fourths majority needed to override Dunleavy and restore the cuts. Earlier this week, the House and Senate passed a measure to restore most of the cuts, but Dunleavy has indicated he intends to veto most, if not all, of the money put back into the budget by lawmakers.

Asked if the trust could replace the funding that was cut from the state, Biastock said no.

“We can’t replace reduced or eliminated state general funds for services and supports for beneficiaries,” she wrote. "... Our annual budget would represent a small fraction of the amount the state spends to provide services to beneficiaries each year. "

Cuts housing for the mentally ill will be noticeable most immediately on the streets of Anchorage, where the number of homeless with severe mental health disorders is likely to increase over the next year as housing options decrease because of funding problems. This is part of a projected increase in overall homelessness because of other cuts to services, that comes at time when Anchorage was already struggling to deal with the issue of outdoor camping in public parks.

“This is a challenge for us on a daily basis already,” Doll said. “We are frankly one of the worst providers of that kind of service. It’s not something that law enforcement is set up to do.”

Programs that keep people from reaching a crisis point would be less expensive and more effective, he said. The cuts shift the burden to police, which takes them away from other duties they are trained to do, like patrolling neighborhoods, he said.

The system already can’t serve all those in need, Rafferty said. But, providers were looking forward to getting a government waiver that would allow them to bill Medicaid differently, opening up the door for different clinic models that would expand care for the mentally ill and those with substance abuse disorders. Under the new model, the need for grant funding from the state would decrease, but the transition has to be made fully before funding disappears, she said.

“We could deliver care better and see improvement, if we can partner through the state,” she said. “We need to be able to have Medicaid funding to be able to do that.”

One of the bigger concerns for Providence is recruiting mental health clinicians, she said. The cuts to Medicaid, which will result in reduced reimbursement rates for behavioral health providers, as well as the overall unstable political climate in the state make recruitment challenging, she said. It also causes clinicians to leave the state, she said.

Chris Blake works for an organization called Choices, running a program that puts people who are mentally ill and homeless into housing and helps support them with things like food, transportation and keeping medical appointments. He estimates he serves 75 clients a year. Since the beginning of July, four of them have lost housing because of funding snags related to the Alaska’s budget situation.

“Essentially they are camping,” he said.

He has other clients in Sitka Place that stand to lose housing as well. His program is part of a “housing first” model that many cities across the nation are using successfully to get mentally ill people out of the homeless population. When clients who are on the road to becoming stable lose their housing, it destabilizes everything else, which is ultimately not what the public wants, he said. As winter sets in, he said, having people with mental illness living outside can turn deadly.

Dewayne Harris is the executive director of Alaska Mental Health Consumer Web, which provides day services to people with mental illness and substance abuse problems, many of whom are homeless, offering help with employment, life skills, sobriety and housing. Last year their housing program helped 44 people move in to homes and another 18 stay in their homes, he said. The budget cuts mean reducing their services by half and they will have to discontinue their housing program.

“Historically what we’ve seen is (without housing and other support) these folks, because they continue to decompensate, end up in one of three places: in the hospital, API or jail,” he said.

His hope is that policymakers will look at the data and see the cost savings and practicality of programs like his.

“The only way I can wrap my mind around it is they must not truly understand the challenges, communities, including Anchorage, face,” he said.

Correction: An earlier version of this story incorrectly reported that Gov. Dunleavy vetoed $129 million in Medicare funding. The cuts were made to Medicaid funding.