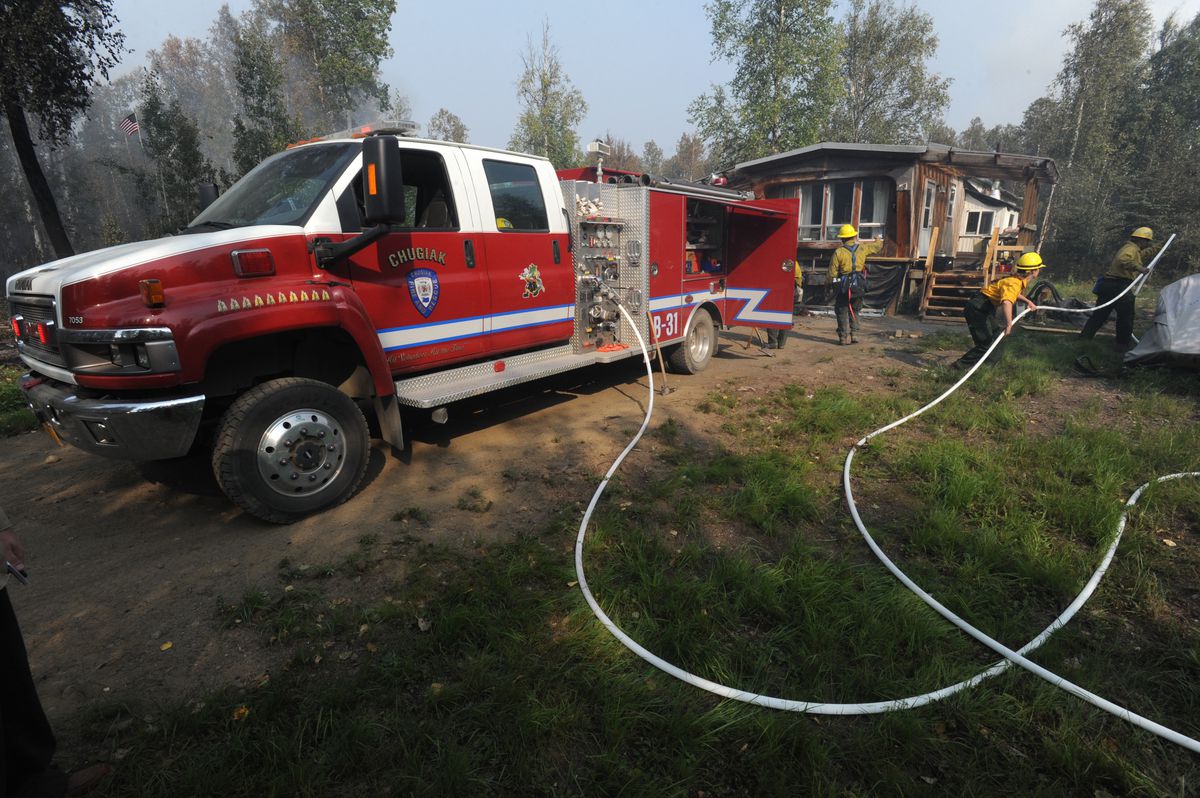 Firefighters mop up hot spots at a residence along the Parks Highway on Tuesday, Aug. 20, 2019. (Bill Roth / ADN)

Firefighters mop up hot spots at a residence along the Parks Highway on Tuesday, Aug. 20, 2019. (Bill Roth / ADN)

All residents near the destructive McKinley fire burning between Willow and Talkeetna have been accounted for, a borough official said Wednesday.

The Matanuska-Susitna Borough estimates that 350 to 400 people have been evacuated because of of the fire, said Ken Barkley, director of emergency services for the borough. Many people also chose to stay behind in the evacuation zone and shelter in place, Barkley said.

The McKinley fire and the Deshka Landing fire, both near Willow, and the North Fork fire near Homer were all listed as human-caused in a wildfire situation report from the Alaska Interagency Coordination Center. The AICC is the focal point for federal and state agencies involved in wildfire management in the state.

Authorities did not have more specific details about the circumstances that caused those fires, said Bureau of Land Management Alaska Fire Service spokeswoman Bridget Bushue.

There is a wide range of situations that can result in the cause of a fire being listed as “human,” whether it was started intentionally or accidentally, Bushue said. Those include campfires, cigarettes, fireworks, ATV exhaust and more.

“Basically anything that’s not a natural phenomenon, but caused by humans,” she said. “There’s a human somewhere in the equation."

Several fires ignited this week and last weekend in Southcentral as the region has dealt with exceptionally dry weather and record high temperatures throughout the summer.

State assessment teams were surveying the McKinley fire zone on Wednesday and will make a recommendation to Gov. Mike Dunleavy about whether a state disaster declaration should be made, and if it is made, what it should include, said Commissioner Corri Feige of the Department of Natural Resources. There was no estimate for when a state declaration decision would be made.

“It really depends on their safe access into those areas," Feige said.

The Alaska Department of Conservation issued an air quality advisory Wednesday for the Southcentral region. The Susitna Valley and Kenai Peninsula are experiencing degraded air quality due to wildfire smoke, with the Anchorage Bowl also continuing to be affected by smoke, the advisory said.

Here are details on the five major fires in the area, according to the Alaska Wildland Fire Information website, the National Wildfire Coordinating Group, the AICC and agencies involved in tracking the fires.

This information is current as of Wednesday afternoon, unless otherwise specified. This story will be updated as figures change and new information becomes available.

For traffic conditions, check the Alaska Department of Transportation’s 511 travel information site. Stretches of the Sterling Highway and the Parks Highway have been closing and reopening — often with pilot cars to lead vehicles through — as conditions allow. Even when those roads are open, drivers can expect delays.

Location: On the Kenai Peninsula, northwest and west of Cooper Landing and to the east and northeast of Sterling.

Other information: The Sterling Highway was open as of late Wednesday. Cooper Landing and Sterling neighborhoods east of Feuding Lane and east of Adkins Road are still on “ready” notice, meaning people should be prepared for potential evacuation.

Firefighters will continue working to limit the Swan Lake fire’s spread to the west toward Sterling, and will work to protect public-use cabins in the Resurrection Trail corridor.

There will be community meetings about the Swan Lake fire at the Cooper Landing School on Wednesday at 6 p.m. and at the Sterling Community Center on Thursday at 6 p.m.

Location: North of Willow, in the Susitna Valley.

Cause: Officials initially attributed the fire to wind blowing a tree onto a power line Saturday near Mile 91 of the Parks Highway. As of Wednesday, the cause was listed as “human” in the multi-agency report. Beyond that, the specific circumstances have not yet been determined, Bushue said. If power lines were part of the reason a fire started, that would be considered human-caused, she said.

Other information: At least 80 structures have been destroyed in the McKinley fire, a spokeswoman said Wednesday. An evacuation order remained in effect for the fire area from Mile 82 to Mile 91 on the Parks Highway. About 275 firefighters and other personnel are continuing efforts to assess and protect structures.

People who were evacuated earlier this week from neighborhoods near the fire were not expected to be able to return home until next week. Several agencies are working together to get a better estimate of how many structures have burned and determine how many were residences, sheds, shops or outbuildings.

No reports of looting have been made to troopers, despite rumors of crime circulating, said Kale Casey, a spokesman for the incident management team that’s manning the fire.

“If there is this looting thing going on, not one person has stepped up and reported it to a trooper,” Casey said at a community meeting Wednesday.

Fire managers were not expecting the blaze to be extinguished until winter.

“Not when it rains, when it snows," Casey said.

The Parks Highway between miles 76 and 99 is limited to one-lane traffic with pilot car escort, and will be through at least the weekend.

Cause: Human. Fire was reported Saturday.

Containment: 10% as of Thursday morning.

Other information: It is moving slowly south but has not grown significantly in the last day. The fire is about 1 mile from the north end of Red Shirt Lake. About 40 firefighters have been working on limiting the fire’s spread.

Size: More than 700 acres. The fire grew on Wednesday from 700 acres, but poor visibility has made it tough for crews to map the fire’s perimeter.

Other information: The Caribou Lake fire was burning about 100 acres on Monday but by Tuesday evening had grown to an estimated 700 acres. Southeast of the fire, there are more than a dozen structures along the north shore of Caribou Lake.

Cause: Human. Fire was reported Sunday.

Other information: People living along North Fork Road north of the fire and along Diamond Ridge Road to the south are still on a “ready” notice, meaning they should be prepared for potential evacuation.