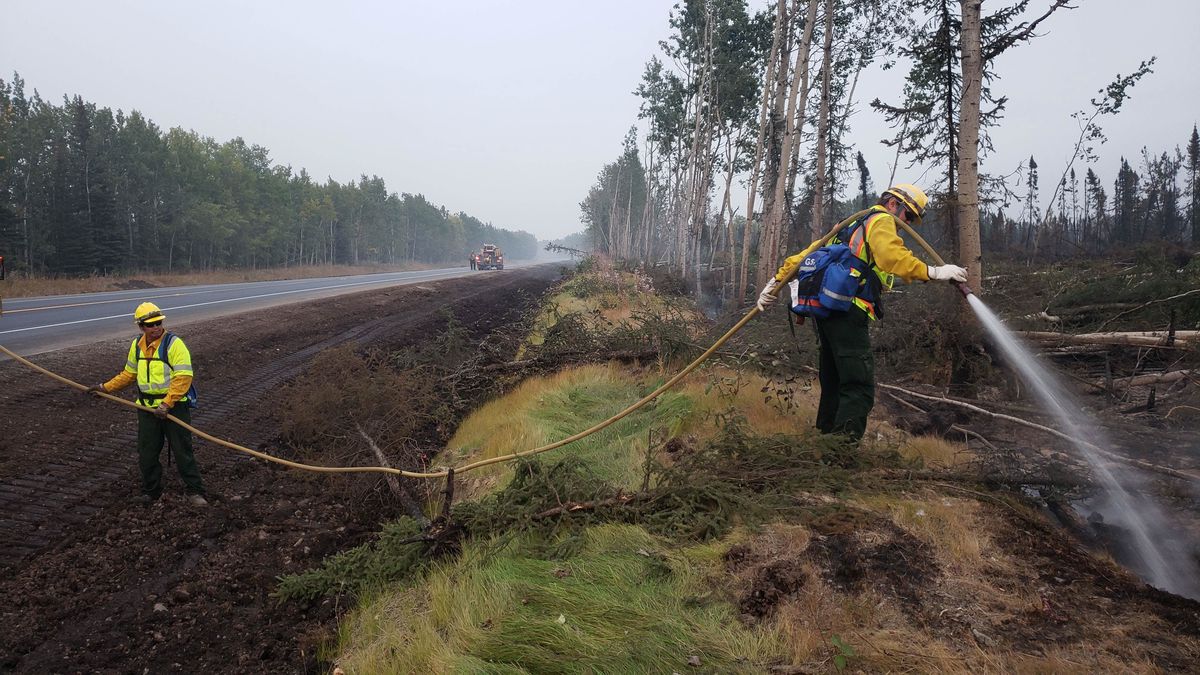 Firefighters mop up hot spots from the Swan Lake Fire along the Sterling Highway on Aug. 29, 2019. (Alaska Fire Services)

Firefighters mop up hot spots from the Swan Lake Fire along the Sterling Highway on Aug. 29, 2019. (Alaska Fire Services)

The tangle of traffic on the Sterling Highway from the sprawling Swan Lake fire led to delayed grocery deliveries, canceled hotel reservations and more empty tables at restaurants, some Kenai Peninsula businesses reported.

“All of a sudden we’ve turned into a little bit of a ghost town,” Homer Mayor Ken Castner said Thursday.

Since the Swan Lake fire roared back to life two weeks ago, it has clogged the Sterling Highway, a crucial artery to get into and out of Kenai Peninsula communities from Cooper Landing to Homer. At times, the fire has closed a stretch of the highway completely.

Most of the past week, that area of the highway was open for one lane of traffic with a pilot car slowly leading vehicles through, and the state Department of Transportation consistently advising against travel. As of Saturday, with the start of the traditionally busy Labor Day weekend on the Peninsula, both lanes of the highway were open in both directions with pilot car escorts. By late in the day, traffic was backing up and the state was urging people to avoid the Cooper Landing area if possible, or be prepared for long waits.

On Sunday, the highway was reported open in both directions with pilot cars, and the state was no longer urging motorists to avoid the area.

Castner described the holiday weekend as “the last hurrah” for the summer tourism season.

“We’ll see if any people come down," he said.

The Sterling Highway ends on the Homer Spit, around Mile 180. Castner said he expects people worry about the traffic and the air quality to get to Homer. There have also been two other fires closer to town: the Caribou Lake fire and the North Fork fire.

Caption
Firefighters from the Snake River Valley Type 2 crew, up from Oregon, prepare for a day of fighting the Swan Lake fire with an operations update Friday morning, Aug. 30, 2019. (Jeff Parrott / ADN)
Wait 1 second to continue.

For some, driving the Sterling Highway is less optional.

“We have a number of people who travel back and forth to the North Slope out of Homer,” Castner said. “A lot of those guys have been held up getting to home or getting to work.”

There are also the businesses that rely on traveling back and forth on the Sterling Highway, including the Kenai-based Country Foods Wholesale. The company trucks groceries from Anchorage to Kenai Peninsula restaurants, hotels and other businesses, said owner Dusty Steinbeck.

Steinbeck said one word comes to mind to describe the past two weeks: Uncertain.

“Scheduling has been just a disaster,” he said. “Everything is out of cycle.”

He said they never knew how long it would take for trucks to get through the section of highway in the area of the fire. On Thursday, a truck was about 12 hours behind schedule, he said, arriving at 9 a.m. instead of 9 p.m.

“Some days are great and other days have been bad,” Steinbeck said. “There’s been situations where it’s 50 miles worth of backed-up traffic and they’re running one lane with a pilot car.”

“It just creates problems,” he said.

At the Save-U-More grocery store in Homer, delivery trucks from Anchorage mostly arrived about a day later than scheduled and shelves largely remained stocked over the past two weeks, said store manager Mark Hemstreet.

At the worst, the trucks were two days late, and the store went a couple days without organic milk, yogurt, eggs and other dairy products, he said.

For drivers and employees, the fire’s flare up meant long work days, he said. Sometimes the trucks didn’t arrive until late at night and people had to be there to unload. He said truck drivers also told him about smoky drives through the fire area with flames on both sides of the highway.

“They said they didn’t want to stop. They just wanted to keep moving,” he said.

Hemstreet said he’s worked at Save-U-More for 14 years. While there have been road closures before because of accidents or avalanches, leading to delayed deliveries, this fire-related delay feels different.

Marian Beck, who owns the Danny J ferry and The Saltry in Halibut Cove, a short boat ride from Homer, said after a strong tourism season in June and July, the number of people in town had recently dropped.

“A lot of the businesses you go to, it’s just dead," she said Thursday.

On a recent weekday, there were eight people on the Danny J, she said. Normally, it would have 29 aboard.

“We’ve been refunding people’s money,” Beck said. “Who wouldn’t be terrified to drive through that fire?”

Sure, some people have called to cancel their reservations, but others have decided to stay in Homer longer, she said.

“The fires have definitely affected business. I think it’s affected everyone on the Kenai Peninsula, but the scale swings both ways,” she said. “Once you’re here, you don’t want to leave.”

Lightning ignited the Swan Lake fire in early June in the Kenai National Wildlife Refuge. After a period of near dormancy, the fire began to grow rapidly again about two weeks ago, pushed by strong winds.

People in Cooper Landing were urged this past week to be ready to evacuate quickly. Many left on their own and most businesses in the community closed.

Beech said supplies continue to get to Kenai. She said she’s heard from some tourism businesses with a few canceled trips, but more clients continue to come.

“The one thing I can’t stress enough is the Kenai Peninsula is open for business, not to negate anything that’s happening in Cooper Landing,” she said.

Beech echoed that message in a video posted Friday on a Kenai Peninsula Borough blog. If people don’t want to drive to the peninsula, they can take a plane, she said.

“If we can figure out how to get you here, we can entertain,” she said.

In response to the fire, Ravn Air Group has recently added about a dozen flights, most of them to Kenai and a few to Homer, according to airline spokeswoman Debra Reinwand.

Kenai Borough Mayor Charlie Pierce on Friday urged travelers to check road conditions before they leave for the peninsula by calling 511.

“We welcome people to the peninsula, but please make a phone call before you come,” he said.