The Kenai Peninsula wildfire took out a key Railbelt power line. It could cost you. 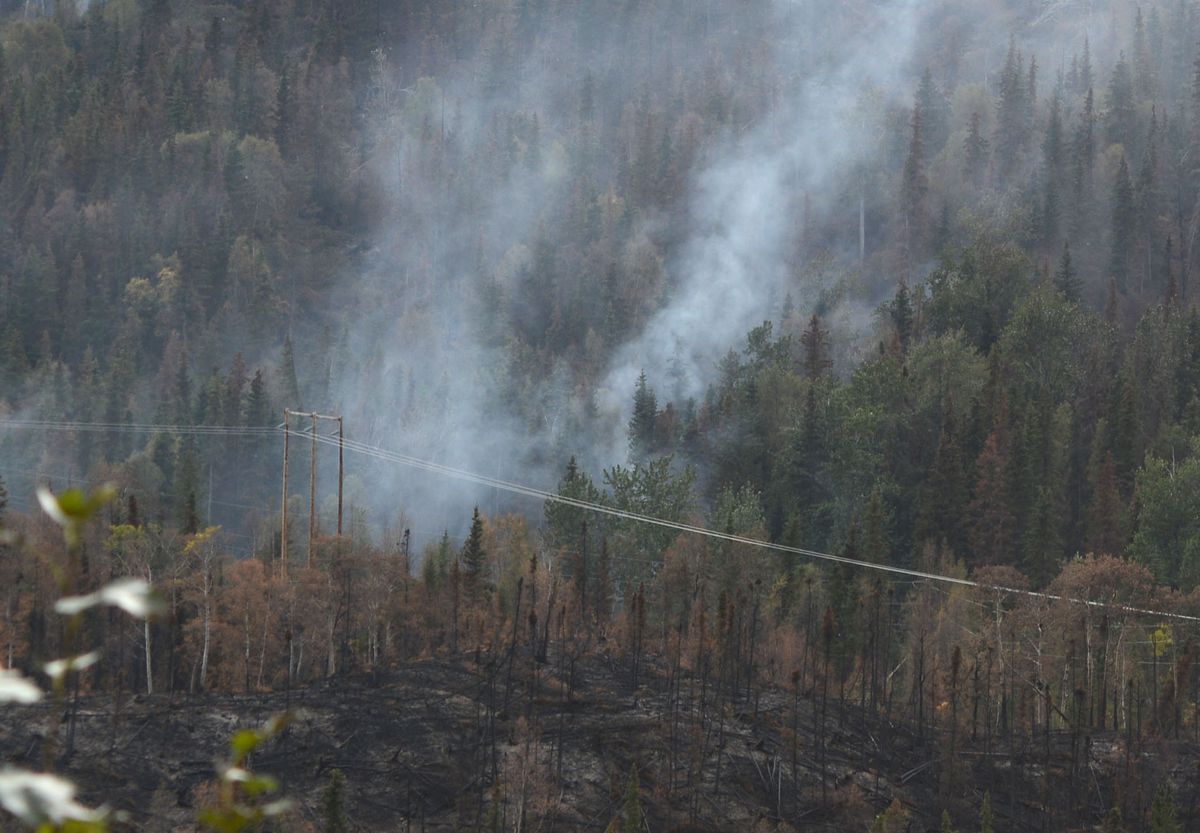 This summer’s unprecedented wildfire on the Kenai Peninsula damaged a high-voltage transmission line, leading to prospects for higher electric rates from Homer to Fairbanks.

The Swan Lake Fire burned over 10 to 15 miles of the line that delivers power from the state’s largest hydroelectric plant at Bradley Lake near Homer to communities across the Railbelt.

The lightning-sparked fire started in June and sprang back to life during a hot windy spell last month, damaging the line and briefly threatening Cooper Landing. It’s burned an area nearly the size of New York City — about 260 square miles — and cost about $46 million to fight, making it the most expensive wildfire in the country this fire season.

The fire was a little over 50% contained as of this week, with more than 260 people staffing it, and it continued to smolder in places. Fire-weakened trees have been falling across roads and camping areas in the Skilak Lake area, according to an update Thursday. A “ready” evacuation status was lifted for Cooper Landing on Tuesday.

Operating since 1991, the Bradley Lake plant is the largest of seven hydroelectric facilities in Alaska. It’s owned by Alaska Energy Authority.

The line that connects the plant to the Raibelt could remain out of service for months, cutting off about 10% of the Railbelt’s power supply that costs about half as much as natural gas.

Several utilities say they expect the damaged line will lead to a 3% to 5 or 6% increase in monthly bills just as winter starts and people start using more electricity anyway.

“Now they’re going to be paying more for that,” said Julie Estey, a spokeswoman for Matanuska Electric Association, which serves members from Eagle River to the Susitna Valley.

Estey says MEA estimates it’s costing $12,000 a day to go without Bradley Lake power and replace it with gas.

The full extent of the line damage still isn’t known, not to mention just how much it will cost to fix, how long repairs will take — or exactly who’s going to pay.

Some say it could be next summer before Bradley Lake is back online.

“That would be speculation at this point. It’s going to be a challenging project, particularly as we go into this time of the year,” said Jim Butler, who’s serving as the incident management adviser for Homer Electric Association, which owns the damaged section of line. “But I wouldn’t want to be associated with any kind of time frame. It’s just going to be a challenging project.”

Photos of the Bradley Lake line taken on a single helicopter survey reveal charred poles and trees fallen atop slumping sections of line.

Officials say a preliminary assessment shows flames damaged 65 poles and more associated structures. It’s not clear if the line itself was damaged by the intense heat or falling trees.

Within the next week or two, Butler says he expects a better handle on the status of repairs.

The damaged section is located in steep country near Skilak Lake and difficult to access. Homer Electric is working with fire managers but the utility has yet to get boots on the ground because of unsafe conditions, Butler said at a briefing to a Bradley Lake management committee on Monday. A number of firefighters suffered burns earlier when they stepped into ash pits.

The lack of concrete information is generating tension among some Railbelt utility officials.

“What if this line doesn’t get rebuilt? What do we do?” Golden Valley Electric Association chief executive Cory Borgeson asked during Monday’s briefing. “For many of us, this is a very, very bad economic situation, for us and our members.”

Right now, operators are spilling any water that can’t be used by Homer Electric Association over the dam, according to Curtis Thayer, executive director of the Alaska Energy Authority. Homer Electric can handle less than half the power generated.

“We call it storage until it goes over the top,” Thayer said. “Then it becomes lost power.”

A Chugach spokeswoman said customers should expect their bills to go up by 3% to 6% a month on average until the line is fixed. Seward’s utility manager, John Foutz, said he’d expect the same there.

“I’m afraid it’s going to be for an extended period of time,” Foutz said.

An ML&P spokeswoman said that utility doesn’t “know the exact impact yet” but an increase could result.

ML&P will also probably shoulder some of the cost of fixing the line, spokeswoman Julie Harris said.

“We don’t have a cost estimate at this time or know what timeline this will occur on,” she said.

Once the extent of the damage can be established, more hard questions lie ahead.

Among them: High-voltage transmission line will need to be shipped from the Lower 48, Thayer said. Repairs still need to go through the design and permitting process.

Then there’s the question of who’s going to foot the bill.

Homer Electric built the line, but it falls outside its service area, Thayer said. It’s not clear who will pay, but it’s likely to be a combination of users, he said.

“We don’t expect Homer to pick up the entire tab,” Chugach CEO Lee Thibert said at the Monday briefing.