Rooms make big difference in the lives of Juneau’s homeless 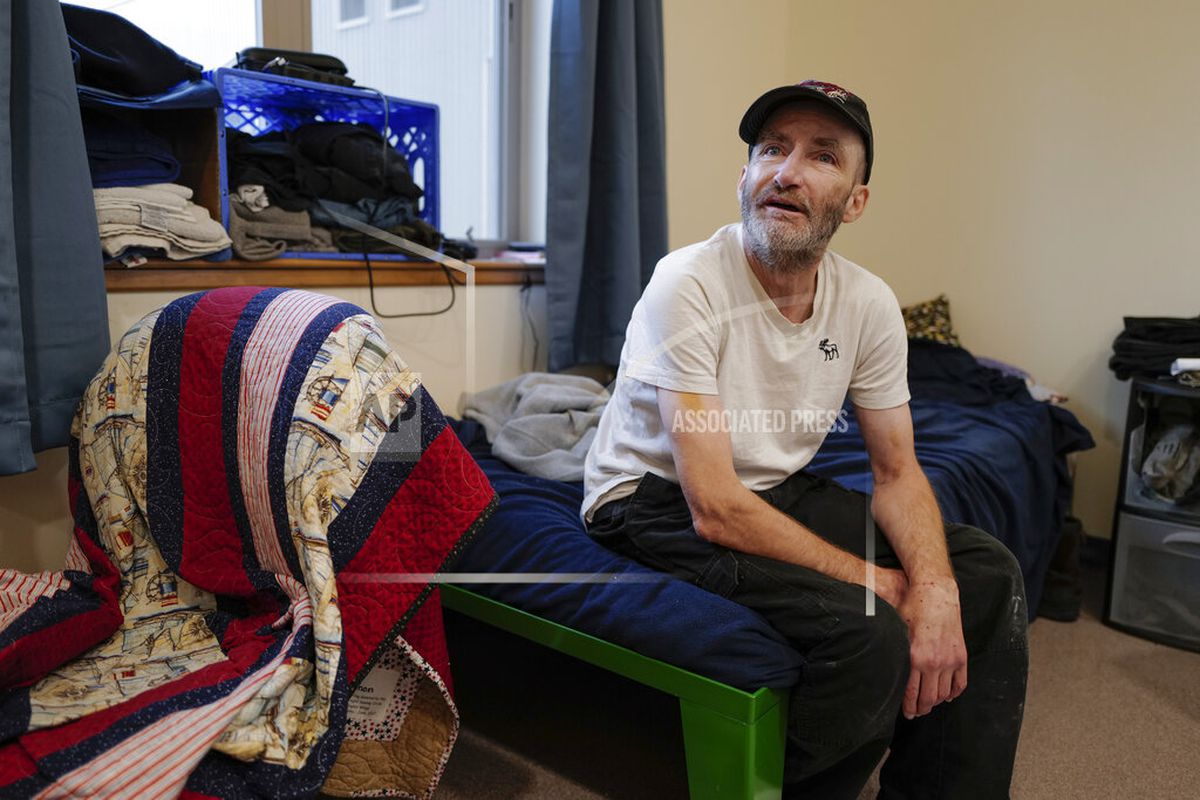 In this Friday, Sept. 13, 2019 photo Greg Brannan, a resident of Juneau Housing First Collaborative's Forget-Me-Not Manor, speaks about the positive impacts the home had made on his life. It is the two-year anniversary of the project that provides housing and support services to chronically homeless adults who have struggled with alcohol and are high utilizers of emergency services within the City and Borough of Juneau. Phase II to build another 32 apartments is currently underway and will open late next year. (Michael Penn/Juneau Empire via AP)/The Juneau Empire via AP

In this Friday, Sept. 13, 2019 photo Greg Brannan, a resident of Juneau Housing First Collaborative's Forget-Me-Not Manor, speaks about the positive impacts the home had made on his life. It is the two-year anniversary of the project that provides housing and support services to chronically homeless adults who have struggled with alcohol and are high utilizers of emergency services within the City and Borough of Juneau. Phase II to build another 32 apartments is currently underway and will open late next year. (Michael Penn/Juneau Empire via AP)/The Juneau Empire via AP

But two years ago, he would have had no place to put gifts from his daughter and sister that sit on top of his fridge, the photograph of his recently deceased mother that smiles from his living room table or the books about arts, photography and Tlingit history that sit on most available surfaces.

"I'd give it away pretty much," Brown said in an interview with the Empire. "What am I supposed to do with it if I have no place to live?"

Before the Housing First Collaborative building in Lemon Creek opened its doors to tenants in September 2017, Brown spent most of the past two years sleeping in the streets.

He far prefers the time he's spent at the building dubbed "Forget-Me-Not Manor."

The building includes 32 single-resident rooms, an onsite clinic and pharmacy, common kitchen area, day room and laundry rooms. It is staffed 24 hours per day by 14 Glory Hall employees, and its residents are people who were experiencing long-term homelessness with a high vulnerability index. Vulnerability index ranks people based on their risk for premature death.

The facility was controversial when it was first proposed since it does not ban alcohol and would house many people with histories of substance misuse and frequent contact with the police and other emergency responders in one place. However, after two years of operations, it has proven to be a success in the eyes of its staff, researchers, city officials and tenants.

Elizabeth Gray, Greg "Shrimp" Brannan and Chris Clark each said in an interview Housing First has been a huge positive for them after spending years on the streets.

She said she especially liked having a place to cook and bake after doing without for years.

Brannan and Clark each said being able to regularly bathe or shower is among the things they most appreciate about Forget-Me-Not Manor.

Brannan, who said he had been attacked while sleeping in the streets multiple times, said he greatly appreciates sleeping behind a locked door.

"I love it here," Brannan said.

Numbers point to other positives that weren't mentioned by tenants, but have been noticed by the City and Borough of Juneau.

"It has proven to be very successful, it's had a reduction in several of the service areas," said Juneau Mayor Beth Weldon in a phone interview. "It lets our police, our ER and our CCFR deal with more complex cases instead of dealing with the same people over and over."

The data also showed tenants reported consuming fewer alcoholic drinks since moving into Forget-Me-Not Manor and generally felt safer about where they slept and better about their general well-being.

Brocious, who is working to update and expand the figures to account for on-year differences, told the Empire via email those stats aren't an aberration. However, her new data wasn't ready to be shared.

"I did re-run the data with a full year of stats (the last report was on six months pre/post) and the significant findings were still the same," Brocious said.

The apparent success of the program wasn't anticipated by everyone from Day 1. Even Glory Hall Executive Director Mariya Lovishchuk, who now champions the project, had concerns.

"I was against it," Lovishchuk said bluntly in an interview.

She said to her it made no sense to group Juneau's most vulnerable and prone to substance misuse in one building.

"I 100 percent feel differently," Lovishchuk said. "Giving people housing first is absolutely essential to creating any kind of stability. When you do stabilize, you can think about how do I do anything other than surviving."

Other critics of the idea opposed the idea of essentially giving chronically unwell people a place to die from substance and alcohol misuse.

Davis said deaths are always hard on staff and tenants and services are held for the deceased.

She said 24-hour checks are performed for tenants that haven't been seen and work is done to foster a sense of connection.

"If people are in jail, we go visit them," Davis said. "If they're up north for medical reasons, we call them. The residents know about the checks. Some of them are funny. They'll pick up the phone and say, 'I'm alive.'"

Some tenants have also had to leave Forget-Me-Not Manor because of aggressive behavior, Davis said. She said over the years there have been fewer than a dozen tenants that were asked to leave via mutual termination agreements, which keep tenants from have an eviction in their records.

"If you get an eviction on your record, it can sometimes be difficult to rent elsewhere," Davis said.

Tenants pay $50 per month to live there or 30 percent of their income if they earn an income, Davis said, and inability to pay rent has never led to someone being asked to leave, Davis said, only aggressive behavior.

"Two people we asked to move out our first year have moved back in and are doing well," Davis said. "We always believe in second chances."

Construction is happening on the next phase of the Housing First project.

The second phase will add 32 single residences to the building and is expected to be done by late summer of next year, Lovishchuk said. She said there is definitely a need for the additional units.

The second phase of the project, which had a $6.1 million fundraising goal, was made possible through a combination of fundraising, grants and donations.

The Alaska Housing Finance Corporation awarded the project a grant of about $2.5 million, which led to domino-ing support from the City and Borough of Juneau ($1.8 million), Alaska Mental Health Trust Authority ($350,000), Bartlett Regional Hospital ($250,000), Premera Blue Cross ($250,000) among others.

"Once the project got off the ground, it's really been amazing to see how much more support it garnered," Lovishchuk said.

She said Tlingit & Haida Regional Housing Authority deserves a lot of credit, too. The housing authority donated land to be the site of Housing First.

"Without them, the project was going nowhere," Lovishchuk said.

Housing First tenants told the Empire they're glad to see the Forget-Me-Not Manor increasing its capacity. They said they still know people staying at emergency shelters, camping or sleeping in the streets, and want their lives to improve.

“I love it” Brannan said of construction sounds audible from the common room. “It keeps me up, but I know it’s helping others.”