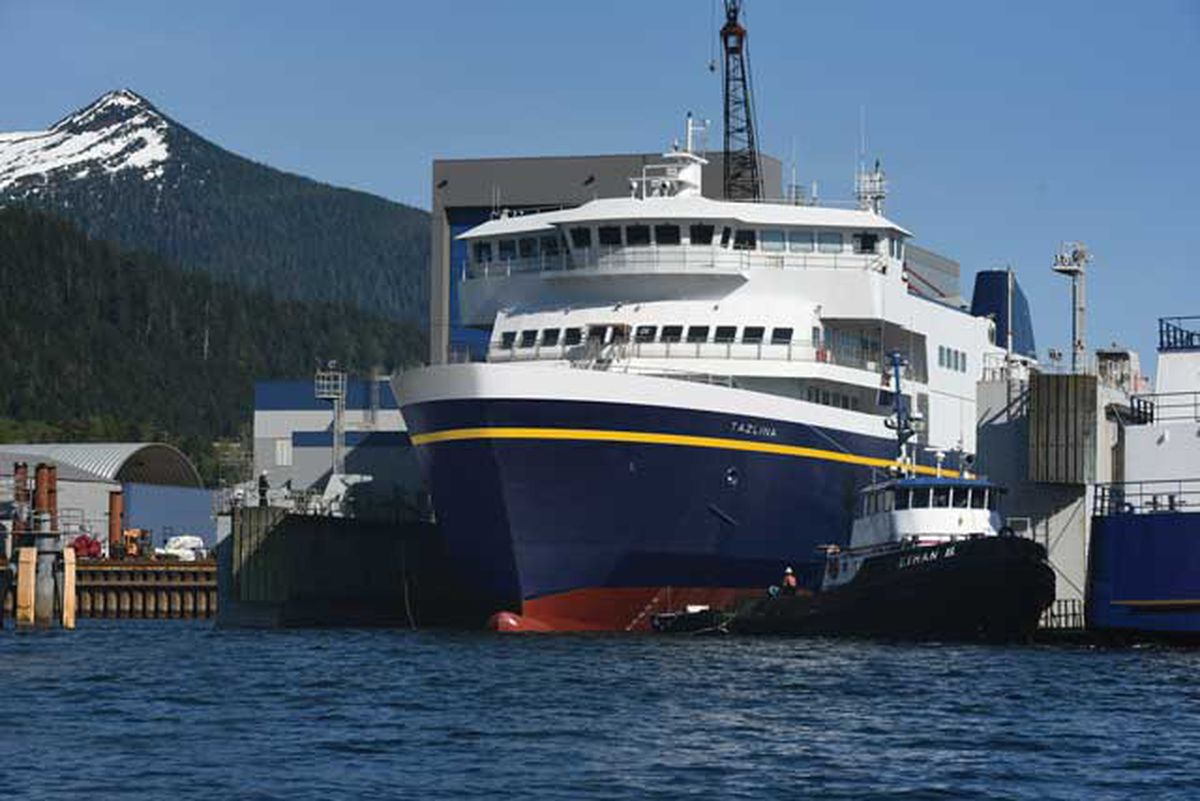 The M/V Tazlina is seen at the Vigor Industrial Shipyard in Ketchikan. It's first of two "Alaska class" ferries and the largest ever built in the state. (Photo/Courtesy/Vigor Industrial)

The M/V Tazlina is seen at the Vigor Industrial Shipyard in Ketchikan. It's first of two "Alaska class" ferries and the largest ever built in the state. (Photo/Courtesy/Vigor Industrial)

The Alaska Department of Transportation and Public Facilities has found some temporary help for Southeast Alaska towns cut off by maintenance problems afflicting two of its older ships.

On Friday, the agency said it will pull the new ferry Tazlina from a shipyard in Ketchikan and will press it into service. The Tazlina had been awaiting the installation of side-loading doors and crew quarters not included in the original design for the new ship or its sister, the Hubbard.

Even without that work, the Department of Transportation said the Tazlina can be used “to provide as much service to the northern Panhandle as regulations will allow, and will call on Haines, Skagway, Gustavus, and Hoonah.”

Without crew quarters, Coast Guard operating restrictions mean the ship can sail for only 12 hours per day.

That’s still an improvement over current conditions. Earlier this month, the state learned the ferry LeConte needs more work than budgeted, so the state cannot afford to fix both the LeConte and a separate ship, the Aurora. Both of those ships are used in northern Southeast Alaska. The state is planning to repair the least-damaged ship.

After word of the LeConte’s situation spread, state legislators, mayors and chambers of commerce urged the state to press the Tazlina into service. That ship lacked a crew but is mechanically sound.

According to the Department of Transportation, parent agency of the Alaska Marine Highway System, collaboration with various ferry workers’ unions made it possible to sail the Tazlina.

“This doesn’t quite get us back to the inadequate schedule that was published, but it beats starving communities and villages,” said Sen. Jesse Kiehl, D-Juneau, who represents northern Southeast Alaska.

Kiehl said he was speaking of economic starvation, but for some communities, the starvation has been uncomfortably close to literal. In the town of Pelican — which will not be served by the Tazlina — residents have hired a salmon-fishing vessel to carry food and supplies from Juneau, CoastAlaska public radio reported. In Gustavus, residents used a landing craft.

Weather conditions over the past few weeks have halted air travel across the region, and even when air service has been available, shipping is $1 per pound. Other communities in Alaska have long coped with similar hurdles, but Southeast’s coastal communities weren’t expecting it and aren’t prepared.

Rep. Sara Hannan, D-Juneau, represents much of northern Southeast Alaska and said that while the Tazlina’s arrival will bring some relief, it will only serve until Jan. 5 at best, and there is still no help available for Prince William Sound communities like Cordova.

“This is not a fix that gets us through to spring service, but for the people who are stranded right now, it helps them,” she said.

For Cordova, a winter without ferry service and heavy questions about the future