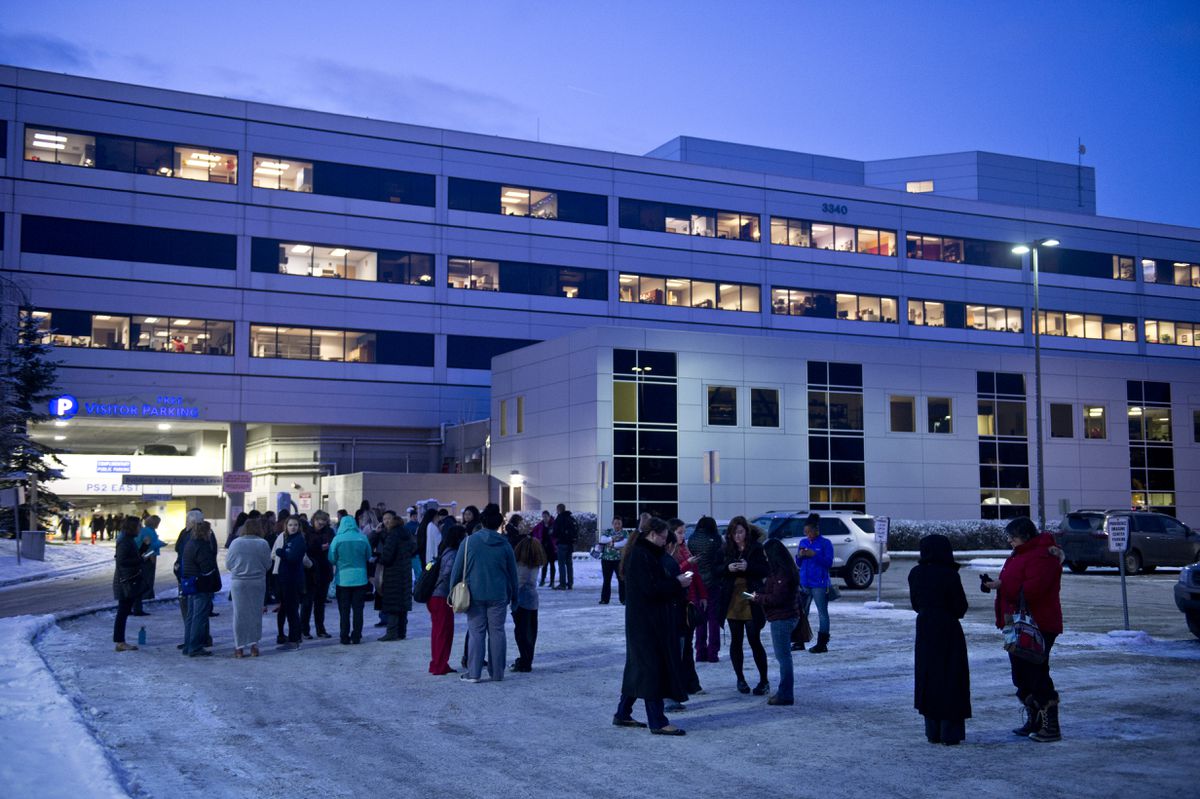 Living in Alaska, a state with more large earthquakes than anywhere else in the nation, means it’s important to do some extra planning.

From preparing your pets to knowing how to act the moment the shaking begins, here are some ways to ready yourself and your family for the next big earthquake.

When you start to feel an earthquake, don’t run outside, don’t run to the door frame — in fact, don’t run anywhere. Just stay where you are and drop to the ground while trying to get underneath something sturdy, said Audrey Gray, emergency programs manager at the Municipality of Anchorage.

“We don’t recommend doorways, mostly because the doorways are really no stronger than any other part of the wall structure of your building,” Gray said. And the door could swing back and hit you.

Running outside risks injury from falling building facades, light poles and other debris.

“The No. 1 cause of injuries during earthquakes is when people are hit by falling objects,” said Jeremy Zidek, public information officer with the Alaska Division of Homeland Security and Emergency Management. “The second most common way they’re injured is they’re thrown to the ground.”

So it’s important to seek cover and stay put. Once you’re under a table or desk, Gray said, grab its legs and hold on tight, as the shaking will likely rattle the furniture you’re holding onto as well. While using one hand to secure the table leg, use your other arm to cover your head and neck for extra protection.

If you use a wheelchair or a walker, you should lock the wheelchair or sit on the walker if possible. “Bend over, make yourself as small as possible," Gray said. “Then, cover your neck and the back of your head with your hands.”

Your kit should reflect you

Earthquake kits are available at big box stores and online, but curating one to fit your own needs and tastes might be a better approach, Gray said. She recently cooked some of the food from her premade earthquake kit and realized it wasn’t anything her family regularly eats.

“And my kids absolutely hated everything that was in it,” Gray said.

Gray and her family have started doubling up on the canned goods they buy at the store — things they know they like and won’t mind eating if disaster strikes.

In addition to food, water shouldn’t be overlooked, Gray said. She recommends at least a gallon per day per person. But if you want enough water to bathe with, Gray stressed that 3 gallons per day per person might be better. It’s a lot of water to buy at once, so Gray looks for sales at local stores and that’s when she stocks up.

Have a kit with enough supplies to last at least a week at home, Zidek said, and another bag with supplies ready if you need to evacuate.

Assembling a kit might feel like a daunting task, but it’s likely many Alaskans already have most of what they need in their houses already, Gray said. That’s especially true for hikers and campers who have sleeping bags, stoves and backpacking meals.

When preparing your earthquake kit, keep your entire family in mind, including your pets. Have enough dog and cat food ready, as well as litter and litter boxes.

Zidek suggests having printed photos of your pet and hard copies of their shot records. For many pets, getting into an emergency shelter means proving they’re up to date on their shots. And if you lose your animal, having a picture makes it easier to find them. If you haven’t already, microchipping or digitally registering your pets is also a good idea.

If you and your family members get separated, Gray said, your plan should designate someone to call who lives out of state, because those calls often go through better than calls within Alaska. That way, there’s an intermediary who can relay information about other people you need to connect with. For communication within Alaska, texting generally works better, Gray said.

If you leave in a rush or can’t immediately return to your home, having digital and hard copies of your important documents will help in the days following a disaster. You can store documents as hard copies, on thumb drives, CDs or cloud storage services like Google Drive, Zidek said.

Key documents to keep handy include:

• Last will and testament

The November earthquake tipped over hundreds of hot water heaters, Zidek said. That’s an easy fix — you can buy metal straps at the hardware store to keep them in place. And the payoff is twofold: Your water heater stays undamaged and you have access to at least 30 gallons of drinkable water.

If you’re a renter, some of the structural aspects of your home might be out of your control. Gray recommends having your landlord’s phone number handy, getting renter’s insurance and inquiring about renter’s earthquake insurance.

“It’s not terribly expensive," Gray said. “And it will definitely save you if all of your things get damaged.”

Make a plan — and practice

Zidek said a family emergency plan starts with a conversation

“It can be during a long car ride or after a family dinner," Zidek said.

Then, look for opportunities to practice that plan. Maybe the smoke detector goes off during dinner, Gray said. You can use that moment to rehearse grabbing your things and leaving.

“Get that muscle memory,” Gray said. “This is what it actually feels like to go to the garage, grab my kits, walk out the front door and maybe walk to the end of the street.”

You might realize your kit is too heavy, and you’ll have a better idea of how things will work in a real emergency. And Gray stressed that personal preparedness can free up resources for those who will need it most during an emergency.

“The more prepared people are in the community," Gray said, “the easier it’s going to be for our entire community to recover after an emergency.”

[Read more in our series, “Shaky ground: A year after the 7.1 earthquake in Southcentral Alaska”]