Amid outrage over ‘Pirate’, it’s not easy to be a guy with a face tattoo in Fairbanks right now 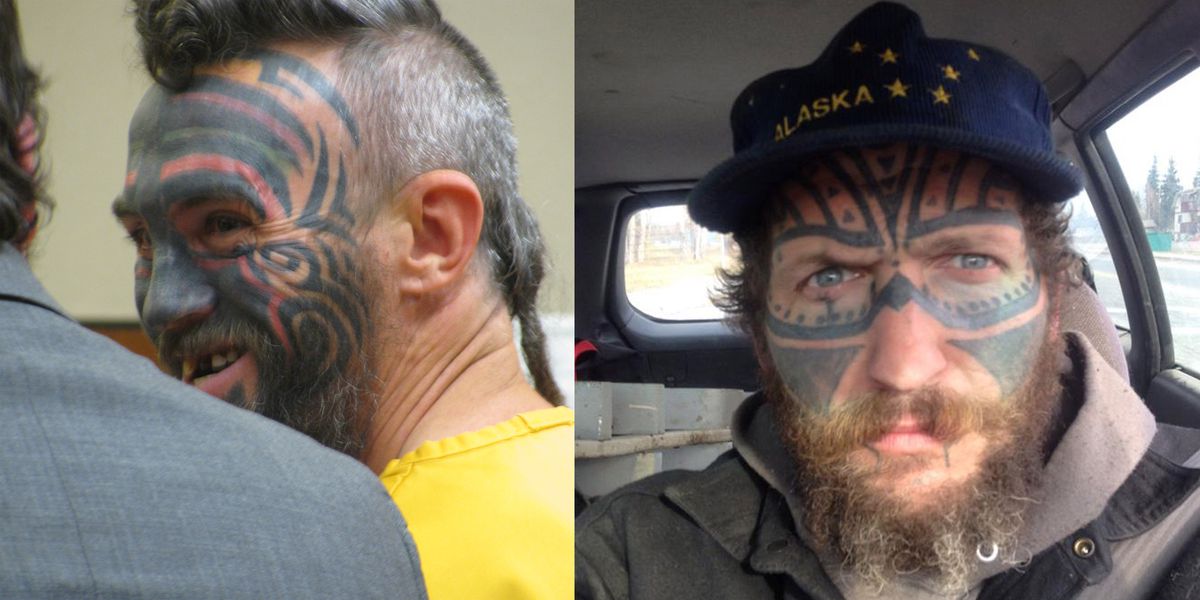 It’s not a great time to be a guy with a face tattoo in Fairbanks.

Selovich is known for being charged in a notorious 2015 rape and torture case in which he allegedly held a woman captive at a remote cabin outside Manley Hot Springs for five weeks of brutal abuse.

The case fell apart after the victim died, and Selovich was never prosecuted.

When people learned he’d recently returned to Fairbanks after being released from prison in a separate Las Vegas, Nevada, rape case, outrage ensued.

Soon people were posting sightings online of Selovich, who has a distinctive tattoo that covers much of his face.

Some recorded videos of themselves confronting him or telling him to leave town. A Facebook group called “Pirate (aka Raven) Sightings” grew to 3,844 followers in a week.

Meanwhile, a different Fairbanks man who also has a face tattoo has seen some of the rage toward Pirate directed at himself.

Since last week, every time Ester Eddie comes to town to shop at Fred Meyer or search for vintage toys at thrift stores, people have mistaken him for Pirate, he said.

Ester Eddie — he says he goes by the name exclusively — is 44 and has a wife and two kids.

He lives in Ester and collects vintage toys.

With Fairbanks on high-alert for Selovich, he’s been getting misidentified daily.

“It feels like a Twilight Zone episode,” he said.

Sometimes it feels personal, or even dangerous. Trips in to Fairbanks have become “stressful,” he said.

“Is someone going to attack me? Video tape me?” he said.

He wrote a post on one of the growing Facebook groups devoted to Pirate sightings asking people to please not hurt him.

“Yes I have my face tattooed. No I’m not pirate. I mind my own business and don’t bother anyone. So if you see me in town please don’t shoot or attack me because my wife and children will be upset 😔 thanks,” he wrote.

The social media tracking of Pirate has “gotten a little extreme,” he said. “But I can understand why they’re speaking out online and keeping track of him.”

Ester Eddie has lived in the Fairbanks area since 2003, he said. He’s had a face tattoo since the 1990s, and it’s not something he feels like explaining or defending to people.

Usually, he feels like he gets through life in Fairbanks without much judgment.

He helps his best friend, an 85-year-old woman, with her business selling antiques at a downtown store and doesn’t face problems, he said.

“My tattoos are personal,” he said. “Sure everyone can see them, but I don't feel the need to explain or justify them daily. “

The silver lining to the situation lies in how many people have backed him, he said.

“I love it here and am so surprised and humbled by all the folks who have spoken up for me."

Fairbanks district attorney Joe Dallaire did not respond to a request for comment for this story Tuesday.

It’s not clear what has happened to Daniel Selovich himself. He has been quiet on Facebook under his Raven Bushmaster name. The groups tracking him haven’t posted a sighting recently.