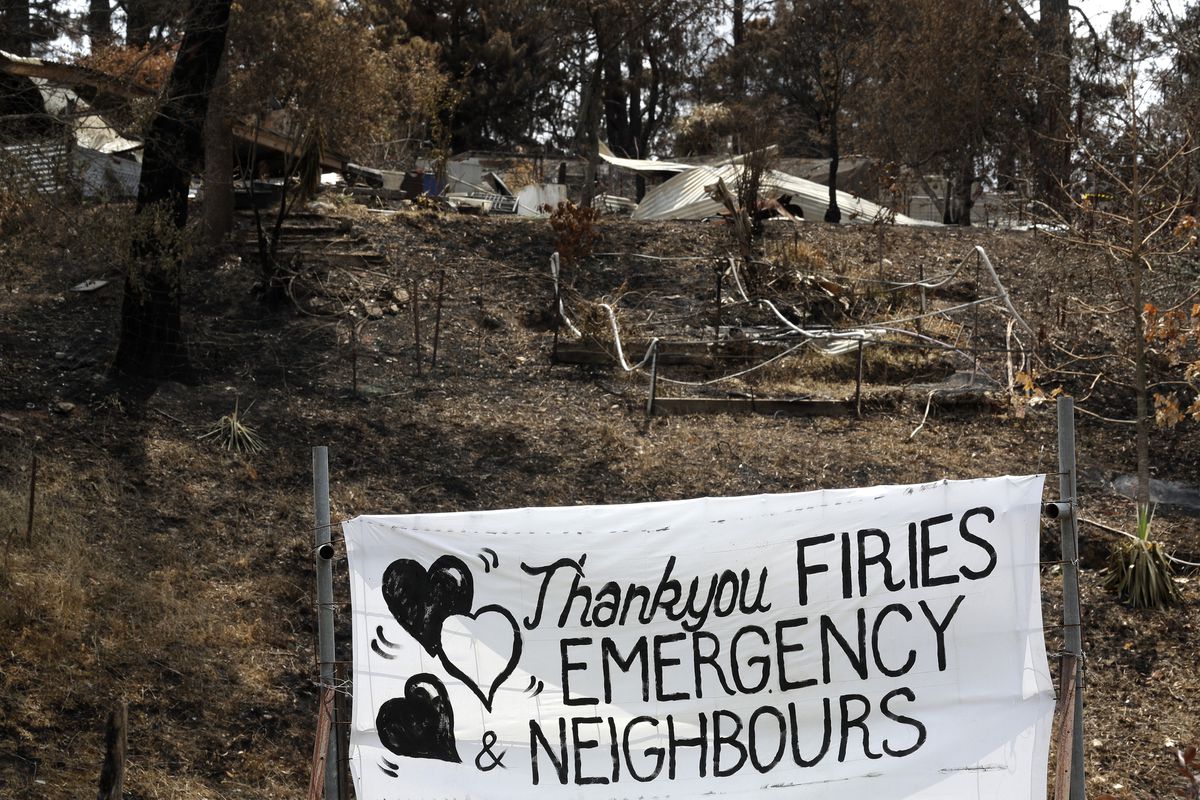 A sign is displayed beside a burned-out house near Mogo, Australia, Thursday, Jan. 9, 2020, thanking "firies," a colloquial term for firefighters. House after house in affected areas have hung makeshift banners offering thanks to firefighters. (AP Photo/Rick Rycroft)

A sign is displayed beside a burned-out house near Mogo, Australia, Thursday, Jan. 9, 2020, thanking "firies," a colloquial term for firefighters. House after house in affected areas have hung makeshift banners offering thanks to firefighters. (AP Photo/Rick Rycroft)

As his plane descended the morning of Jan. 2, Chuck Russell of Wasilla could see fire amid the haze in the mountains outside of Sydney, Australia.

Russell is one of eight Alaska firefighters in Australia this month, helping to manage the lethal blazes spanning millions of acres across the continent.

Russell said that with five kids, three of whom still live at home, making the trip from Alaska was a challenge. But Russell said he chose to go because he knew his skills might help.

“The bottom line is, we’re firefighters, that’s what we do,” Russell said. “We put fires out.”

Russell is working as a liaison between American and Australian firefighters, one of the 159 U.S. federal firefighters deployed to the burning areas of Australia since early December. He is stationed at the New South Wales State Emergency Operations Center in Sydney.

A few days after Russell arrived, fires in the southern part of New South Wales became so bad that they created their own weather, with lightning coming out of the fire cloud.

A giant monitor at the front of the emergency operations center where Russell is working shows the locations of the fires. On bad days, the locators turn from blue to red, indicating their severity.

“You can feel the stress here at the command center when that starts happening,” Russell said.

When fire conditions are extreme, he spends the day calling people out on the fire line, making sure they are safe and have the tools they need.

Six of the eight Alaska firefighters sent to Australia are working in managerial positions. One Alaska smokejumper and one Chena hotshot are also helping fight the blazes, according to Beth Ipsen, Bureau of Land Management Alaska Fire Service spokeswoman.

A 2001 agreement allows firefighters from the United States and Australia to aid each other during large infernos if requested by one country’s government, according to Jessica Gardetto, spokeswoman for the National Interagency Fire Center in Boise, Idaho.

The last time Americans went to Australia to help with wildfires was in 2010.

“That was during one of their pretty intense fire seasons," said Ray Crowe of Fairbanks, who has been at the command center in Sydney since mid-December. "But this one blows that one out of the water as far as the acres, structures destroyed, fatalities.”

Crowe, who works as the Alaska Interagency Coordination Center manager at the Alaska Fire Service in Fairbanks, said the active wildfire days have been followed by a lull of rain and clouds, before temperatures climb back to anywhere from 80 degrees to 114 degrees Fahrenheit.

“Some of the biggest fire growth I’ve seen," Crowe said of the blazes.

The fires in Australia come after a particularly damaging summer of fires in Alaska. Wildfires burned through 2.86 million acres of the state by the end of last November, costing over $300 million.

Crowe and Russell helped manage Alaska’s wildfires last summer. But they said those fires were different from what’s happening in Australia. Though some Alaska wildfires did burn near populated areas, it wasn’t “nearly the numbers of homes that we’re seeing here,” said Russell, who works as the regional fire management officer for the National Park Service in Anchorage.

Russell said he credits breaks in weather and continued firefighting in keeping the blazes away from even more communities in Australia.

"It could have been way worse than what it is,” Russell said.

Amid the tension, there have also been moments of levity. The sign for the two Alaskans at headquarters has their names: Russell and Crowe. People often stop by their work area to joke about the New Zealand and Australian “Gladiator” actor of the same name, Russell said.

They’re sharing a space with Canadian fire managers, who had already hung the Canadian flag when they arrived. Noticing the lack of an American flag, Russell said he walked to the American consulate in Sydney in search of the Stars and Stripes.

When the consulate didn’t have any flags to give them, they ordered two American flags on Amazon — one to hang in Sydney, and a second for all of the American firefighters deployed to Australia to sign and send back to the National Interagency Fire Center headquarters in Boise.

“I love my job," Russell said. "I love representing (the) United States over here.”

Dropping into Australia has had its unexpected moments. Neither Crowe nor Russell had driven on the left side of the road, which can make the hourslong drives out to field sites challenging. Also, there are venomous snakes and spiders to learn about, which neither have run into thus far — “thankfully,” Crowe said.

Also, some of the terminology for managing fires is different. For example, Australians refer to engines as “appliances,” Russell said. And it’s been about a decade since Americans worked in Australia as wildfire managers, so they’re “having to dust off the playbook,” Crowe said.

Russell said he’s seen Australians give American firefighters a warm welcome. When he met a new group of firefighters at the Sydney Airport, he recorded a video of a crowd lining up and applauding the Americans as they walked out of their arrival gates.

“It doesn’t matter if I’m in a taxi cab or checking into the motel or standing in line to get a meal,” Russell said. “If they recognize that you’re a firefighter, you’re going to have multiple people come up and and thank you for your service.”