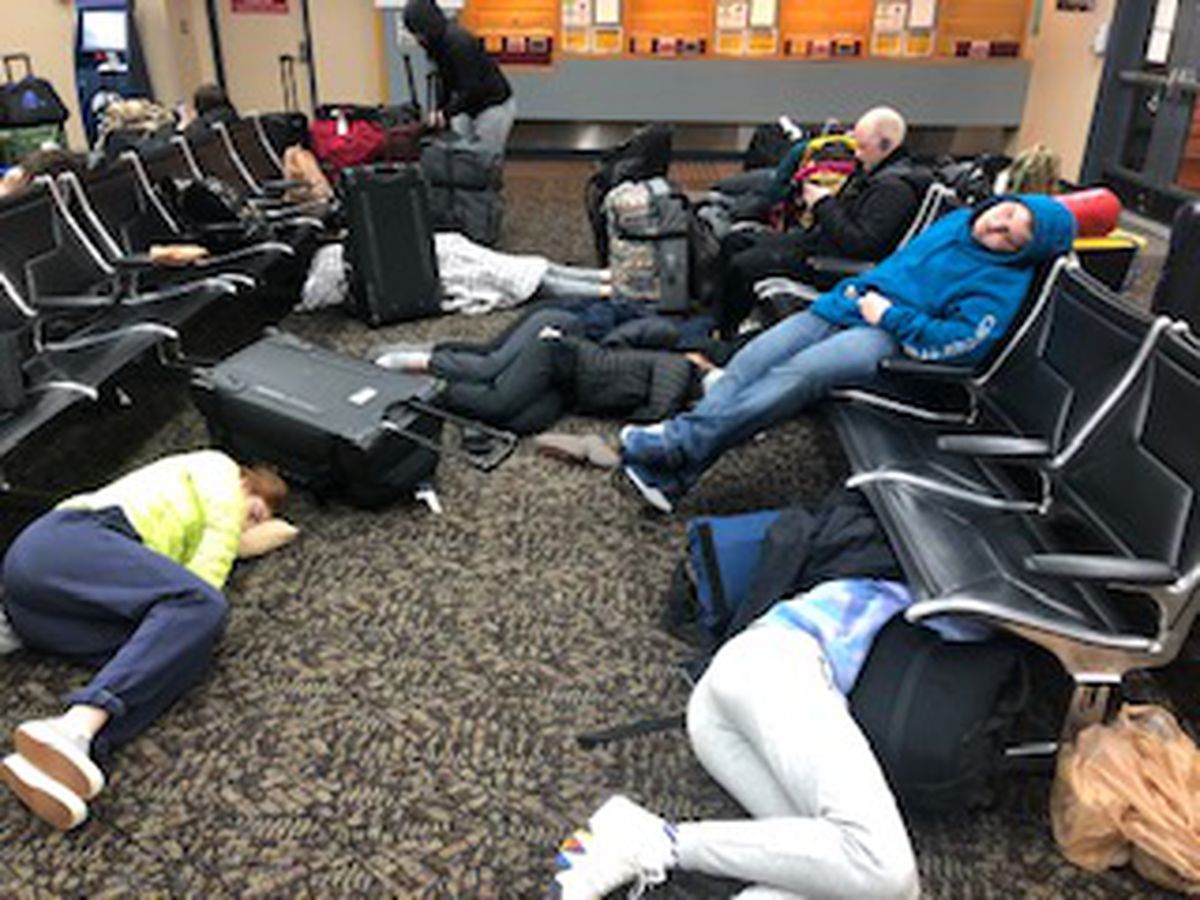 Skagway basketball players sleep on the floor at the Ketchikan ferry terminal early Saturday, Jan. 25, 2020. They have since moved to a hotel. Delays in service caused the ferry to depart Ketchikan late and it stopped in Juneau for repairs. The team was stranded until the ferry was repaired or weather cleared enough to fly. Photo courtesy of Denise Sager

Skagway basketball players sleep on the floor at the Ketchikan ferry terminal early Saturday, Jan. 25, 2020. They have since moved to a hotel. Delays in service caused the ferry to depart Ketchikan late and it stopped in Juneau for repairs. The team was stranded until the ferry was repaired or weather cleared enough to fly. Photo courtesy of Denise Sager

A day after 16 Skagway students were stranded in Juneau by a broken ferry, school and town officials opted not to return home on a charter provided by the Department of Transportation because of safety concerns.

The students were on their way home to Skagway after a two-week basketball tournament when the Matanuska ferry encountered problems and harbored in Auke Bay late Saturday. Although the group has plane tickets for Tuesday, the coaches and chaperone who are currently with the students in Juneau said they’re uncertain the weather will improve enough for a safe flight. It’s unclear when the students will make it home.

The Department of Transportation chartered with Allen Marine for a roundtrip Monday from Juneau to Haines and Skagway, according to a statement. Spokesman Sam Dapcevich said it is uncommon for the DOT to charter with another company “but they have done it in the past.” It’s unclear how much the charter cost the department.

Sager said she and the coaches spoke with Skagway’s mayor and the school superintendent who described heavy winds and poor weather. After talking with another captain, the school officials told the kids to grab their bags and disembarked from the boat less than 15 minutes after they’d boarded. Sager said the boat was smaller than traditional ferries and winds in the area reached nearly 70 mph Monday afternoon.

Dapcevich said the DOT is working to fix the Matanuska as soon as possible, but it’s unclear how long repairs may take.

Skagway was cut off Sunday on all fronts -- an accident involving an oil spill spread across the Klondike Highway, which remained closed Monday for snow and spill cleanup. And heavy snowfall and limited visibility grounded planes.

Snow is expected to continue throughout the week in Skagway. Coach Nate Jennings said he was not hopeful that conditions would be safe enough to fly home Tuesday. Sager said their first choice would be to return home on the ferry because they feel like it’s the safest way back.

“We’d rather wait than put the kids on an iffy flight,” she said.

In the meantime, Sager said students are trying to keep their hopes up and work on as much school work as possible.

“We’re going day by day,” Jennings said. “We’ve all been through the wringer and nothing can surprise us at this point -- we’re kind of numb to it all.”