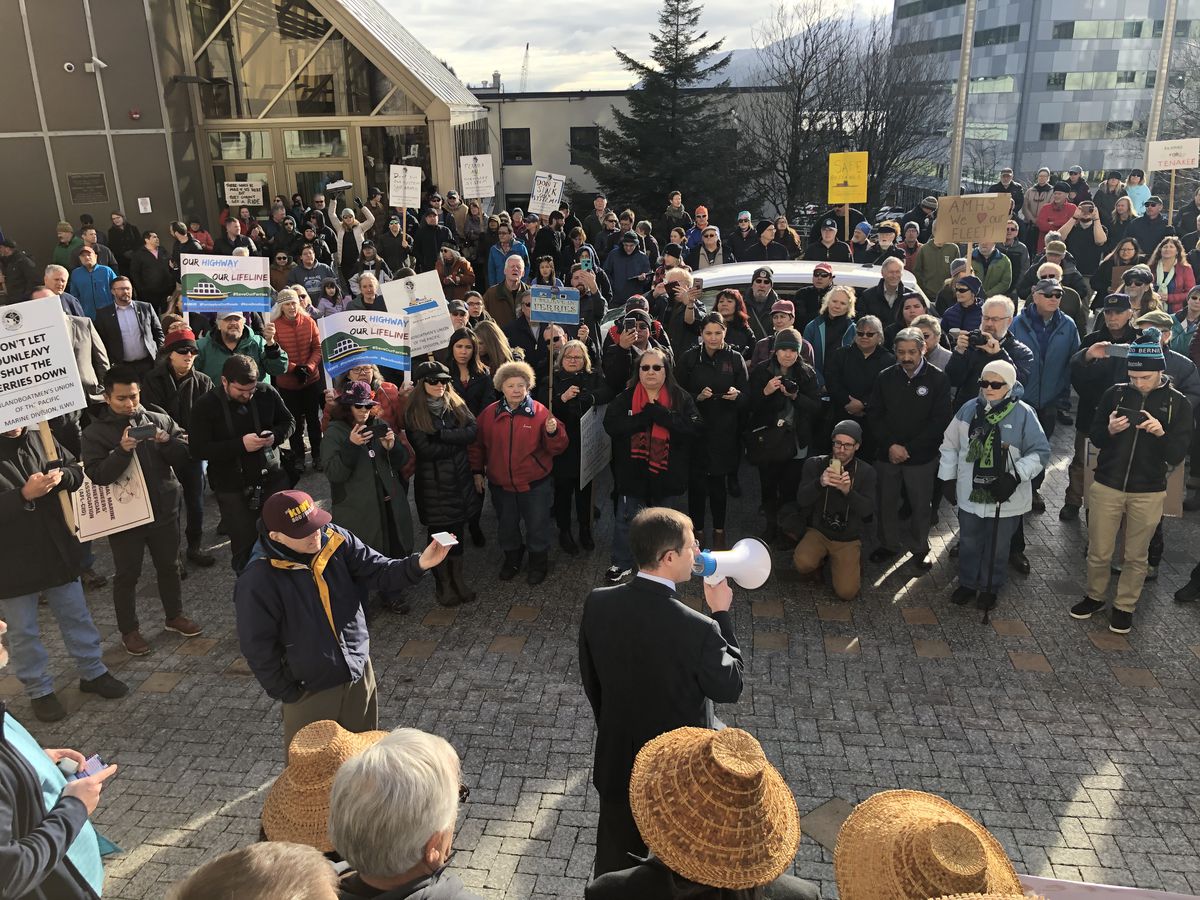 Sen. Jesse Kiehl, D-Juneau, speaks into a megaphone during a protest in front of the Alaska State Capitol on Tuesday, Feb. 11, 2020. Protesters were urging greater ferry funding. (James Brooks / ADN)

Sen. Jesse Kiehl, D-Juneau, speaks into a megaphone during a protest in front of the Alaska State Capitol on Tuesday, Feb. 11, 2020. Protesters were urging greater ferry funding. (James Brooks / ADN)

JUNEAU — Hundreds of Alaskans held a series of rallies Tuesday, urging the Alaska Legislature and Gov. Mike Dunleavy to fix a growing crisis with the Alaska Marine Highway System.

Ten of the state’s 11 ferries are out of service for repairs, remodeling or because the state does not have enough money to operate them. The only state ferry still operating is the shuttle between Ketchikan and Metlakatla; no mainline ferries will be available until at least March.

On Monday, the Alaska Department of Transportation announced it has begun considering private charters to fill the coastal transportation gap, but no firm plans have been announced.

“I call it a marine highway system in crisis,” said Sen. Jesse Kiehl, D-Juneau, speaking into a megaphone at the largest rally, which gathered about 200 people in front of the state Capitol in Juneau.

Most of the state’s ferry-served communities lack surface access to the rest of North America. A few also lack runways or barge terminals, meaning boats, helicopters and floatplanes are the only transportation options.

Communities in other parts of the state have developed without road access or ferry service, but those protesting Tuesday said it is the abrupt lack of service — more than an absence of options — that is causing problems.

“We all adjust to what’s available to us, and we have been depending on these ferries for a long time, and to take them away on such short notice creates a huge problem,” said Jaeleen Kookesh, vice president of Sealaska, the regional Native corporation for Southeast Alaska.

Several of the corporation’s board members were present at the protest in front of the Capitol, and Kookesh said Sealaska is lobbying legislators and the governor to restore service.

Last week, the Department of Transportation said it was soliciting information from companies that could provide freight and passenger service to smaller communities in northern Southeast.

“We got some very interesting responses, so we are now circling back to those companies and talking about getting some service to northern Lynn Canal, to get to the villages, to get to Haines and Skagway in particular. We are even hoping to be able to move some palletized freight,” said Mary Siroky, deputy commissioner of the Department of Transportation.

Siroky retired on Monday and spoke to lawmakers the same day.

“We’re hoping to — sort of by the end of this week — have a better idea of how we might be able to fill in for some service,” she said.

In the meantime, communities are trying to make do.

In Angoon, store owner Shayne Thompson has had to deal with empty shelves.

“We’re out of produce and milk. We’ve got shelfloads of canned goods and plenty of cigarettes and candy,” he said.

Angoon and its population of 400 have had regular ferry service for decades, and without the state’s ships, Thompson said “it’s like taking a giant step back in time, and it really sucks."

Like Kookesh, he said his problem isn’t so much a lack of ferries — he’s making alternative plans to stock his shelves — as the abrupt loss of them.

“We started going into the late fall and winter with nothing in place, so we were flying by the seat of our pants,” he said.

He can make ends meet for now, but he worries about the rest of the community. Without passenger service, will residents want to stay?

“I think going forward, if they continue to be a fail … we’ll kind of get the freight thing dialed in, but it doesn’t matter if they get it dialed in if there’s nobody to sell it to,” he said.

In Tuesday’s protests, there were plenty of signs blaming Dunleavy for current conditions, calling for his recall, and urging higher oil taxes to pay for ferry service. Among the protesters were members of ferry-affiliated unions or other unions participating in solidarity.

Kiehl, though acknowledging a crisis, said the problem has been “a long time coming.”

Most of the state’s mainline ferries are decades old, and last year’s $43 million cut to operations — 31% of the ferry budget — was merely the latest in a string of capital and operating budget reductions.

Those cuts were combined with a labor strike that cut revenue, an unexpected breakdown aboard the Matanuska, and the fact that the state’s two brand-new ferries were unable to use their intended ferry terminals.

On the steps of the Capitol, President Richard Peterson of the Tlingit and Haida Central Council voiced outrage over comments from Southcentral residents and lawmakers who question the need for a state ferry system.

“We need the governor and those that support his agenda to know, our highway is as good as their highway,” he said.

“Our lives aren’t worth any less than theirs,” he said.