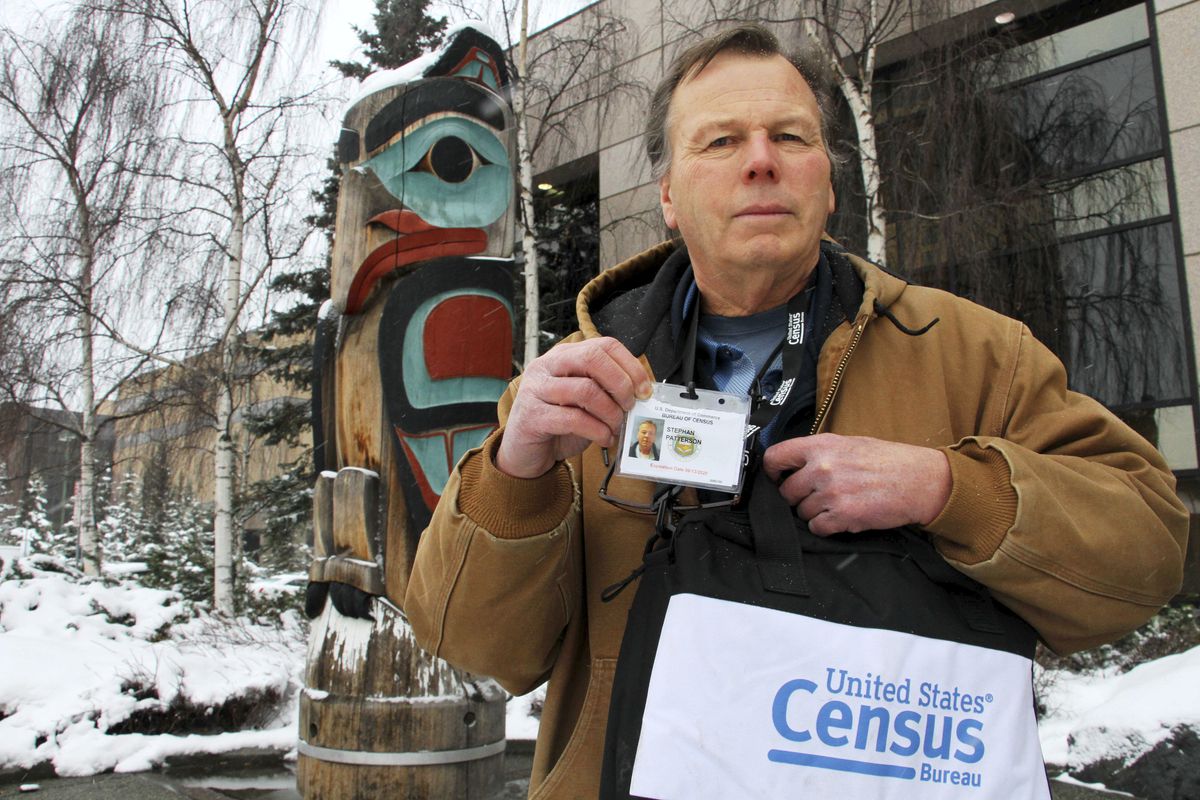 In this Friday, Feb. 21, 2020 photo, Stephan Patterson poses for a photo in Anchorage, Alaska. Patterson and other U.S. Census takers are reporting problems when conducting first-in-the-nation counts in rural parts of Alaska, including lack of communication about assignments, frustration with a smartphone app for filing time sheets and disappointment when they find out they are not being reimbursed for purchasing cold-weather gear. (AP Photo/Mark Thiessen)

In this Friday, Feb. 21, 2020 photo, Stephan Patterson poses for a photo in Anchorage, Alaska. Patterson and other U.S. Census takers are reporting problems when conducting first-in-the-nation counts in rural parts of Alaska, including lack of communication about assignments, frustration with a smartphone app for filing time sheets and disappointment when they find out they are not being reimbursed for purchasing cold-weather gear. (AP Photo/Mark Thiessen)

More than a month into the start of the 2020 census in rural Alaska, some workers going door to door have grown frustrated by not knowing when they will get their next assignments. Others have bought gear to protect against the brutal cold only to find out they’re not getting paid back. And a smartphone app to log hours worked is difficult to use in the field, census takers told The Associated Press.

The counting underway in Alaska may preview some of the challenges that could crop up as the rest of the country is counted this spring. And while conditions in rural Alaska pose unique obstacles, both logistically and weather-wise, some of the nuts-and-bolts hiccups that have surfaced point to a learning curve for what the Census Bureau touts as the largest peacetime operation that the U.S. government undertakes.

“The IT system goes down. You can’t log in your time or expenses, or your training or your regular work,” said Stephan Patterson, a census taker from Palmer, roughly 40 miles northeast of Anchorage.

Census takers started flying out to rural Alaska villages in January to join local hires in questioning residents in person. Mail service is spotty and internet connectivity is unreliable, making door-to-door canvassing the best way to gather responses. The villages get a head start on the census because many people scatter in the spring to subsistence hunting and fishing grounds.

[On the edge of America, census begins in a Western Alaska village]

[Toksook Bay elder is first person counted in 2020 US census]

The rest of the nation will get the chance to answer the 2020 questionnaire starting in mid-March, either online, by mail or by telephone. This is the first count in which the Census Bureau is encouraging a majority of people to answer the questions online.

Starting in May, hundreds of thousands of census takers will be sent to homes nationwide to knock on the doors of residents who haven't answered the questionnaire yet. The Census Bureau is planning on hiring up to 500,000 temporary workers to help with the once-a-decade count that determines how $1.5 trillion in federal spending is distributed and how many congressional seats each state gets.

In Alaska, census taker Carl Schramm said he's had fun going to rugged territory. But he said it's inconsistent work. Some census takers have become frustrated, he said, by having to wait at home for their next assignment without any guidance or pay.

"A lack of communication is the No. 1 problem," said Schramm, a retiree from Wasilla. "You don't know basically what's happening from day to day. When you get back from an assignment, you call and say, 'Where am I going next?' And you really don't get an answer."

Schramm and Patterson say some census takers have quit, either because they weren’t getting paid enough to cover their bills or because conditions were harsher than expected. The canvassing takes place in frigid weather in villages where sometimes the only place to sleep is on the floor of a government building.

In a statement, the Census Bureau said the turnover rate for hires for the rural Alaska count has been lower than expected and some trips have been rescheduled because of unpredictable weather. The agency said Friday that the retention rate has been about 90% for hires, who include 172 local census takers, 158 census takers from outside rural Alaska villages and 125 field supervisors.

"We do everything we can to communicate to our census takers about the temporary work conditions of the census, specifically in remote Alaska," the statement said. "We alert our census takers that at times we may need to stay in schools or gyms when enumerating a village. We try to make the accommodations as best as possible."

Census takers in Alaska are getting paid $28 an hour for work in the field. The Census Bureau pays for their transportation to the remote villages, provides cellphones and gives them a per diem for expenses. But rural Alaska has one of the highest costs of living in the U.S., and a gallon of milk can cost more than $10.

Because the census only happens every 10 years, there's no institutional knowledge among supervisors when questions arise, such as how to classify a salmon-canning factory where workers are living or a trailer that's not listed on any map, Schramm said.

When it comes to what to wear in Alaska, the bureau says it provided census takers with a suggested packing list that included gear for the harsh weather, but the workers were told they wouldn't be reimbursed for additional purchases.

Parts of remote Alaska have low internet connectivity so the bureau has been using paper payroll as a backup for its time-sheet app. Field supervisors also text or call in census takers' hours, according to the statement. When asked, the agency didn't say if the calls and paper backup were being used because of problems with the app.

Patterson and Schramm said they have heard from other census workers about not getting paid on time.

"We do everything we can to ensure our employees are paid on time," the Census Bureau statement said.

Lawmakers on the House Oversight and Reform Committee raised concerns this month about whether key technology for the 2020 census was ready. The committee knows about the concerns over census technology in Alaska and is seeking more information, according to a committee statement.

Another census taker in Alaska, Cynthia, who only wanted her first name used for fear of losing her job, wished there had been more survival training for census takers from outside Alaska who are not accustomed to the harsh winter conditions. Temperatures can drop to 40 below zero.

While the smartphone app could have been more user-friendly, the bureau's hardworking IT workers "have been very calm and very nice" in helping her use it when she had problems, she said.

“There are glitches, but you have to think about how many people they’re handling,” she said, referring to the Census Bureau. “They do it every 10 years, so I think they tend to forget some things. It’s a learning curve for everybody.”