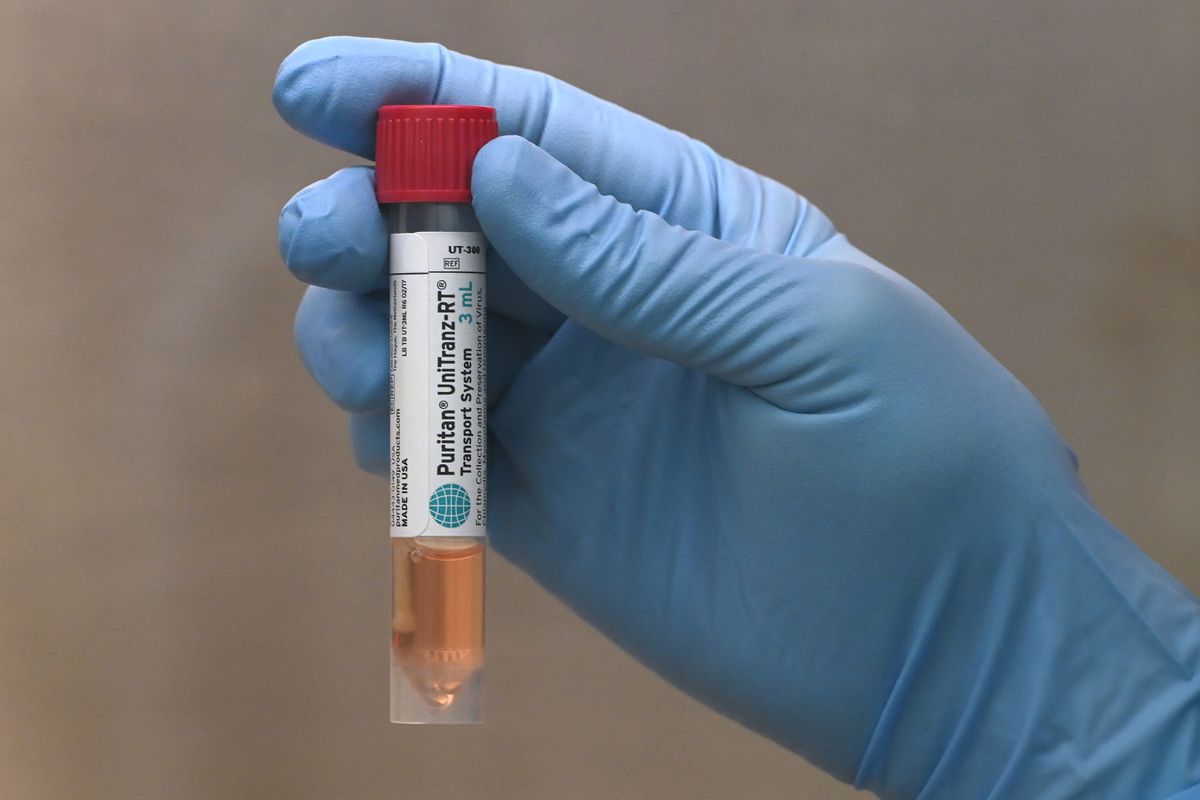 Patient samples arrive to the Alaska State Public Health Laboratory in Anchorage in transport vials like this to be tested for the coronavirus. Tuesday, March 3, 2020. (Bill Roth / ADN)

Patient samples arrive to the Alaska State Public Health Laboratory in Anchorage in transport vials like this to be tested for the coronavirus. Tuesday, March 3, 2020. (Bill Roth / ADN)

JUNEAU — Alaska’s chief medical officer said Friday that the state is preparing to stretch its supply of coronavirus test kits by putting low- to medium-risk cases through a bulk process.

Alaska still has no confirmed cases of the virus. Testing is being used worldwide to track the spread of the virus, which causes flu-like symptoms and in extreme cases can be deadly.

In Alaska, 14 people have tested negative as of Saturday afternoon, and another six are going through testing. Dr. Anne Zink, Alaska’s chief medical officer, said test kits received from the national Centers for Disease Control and Prevention could be used to detect the virus in as many as 200 people.

During testing, a doctor uses a cotton swab on the throat of an infected person and sends the swab to a laboratory.

Testing multiple samples at once is more efficient than testing one at a time, so the state is trying to conduct tests in bulk to reach that upper limit.

[Your questions about the new coronavirus, answered]

Zink said the state has enough tests to detect the virus in at-risk people — those who are showing symptoms and have visited an area with confirmed infections — but not enough for people to have themselves tested just as a precaution.

“We’re really discouraging people from going to the hospital and going in to get tested because they flew through Sea-Tac,” she said.

Officials at Providence Alaska Medical Center in Anchorage and Bartlett Regional Hospital in Juneau said they have not seen a surge of people seeking testing.

“We ask that you please avoid coming to the emergency department unless you have a health emergency and/or you have been advised by a provider to do so,” said Mikal Canfield of Providence.

In a written statement, the Alaska Hospital and Nursing Home Association said anyone who feels they have symptoms of the new virus — and who has visited a high-risk area in the previous 14 days — should call their doctor for advice first.

The association also said that Alaskans should avoid visiting a nursing home if they have visited a high-risk area in the previous two weeks, have “signs or symptoms of a respiratory infection” or have been in contact with someone who has the virus.

The Alaska Legislature has not yet approved supplemental funding of its own, but Adam Crum, commissioner of the Alaska Department of Health and Social Services, said the state has been acting with the expectation that money will be approved.

Alaskans with coronavirus questions can dial 211 on their phones for information. In places without 211 service, dial 1-800-478-2221. Alaska 211 is a service of the United Way, and phone workers can direct callers to resources and answers.

The state of Alaska’s website for the latest information is coronavirus.alaska.gov.