Alaska officials say they are testing 'aggressively and liberally’ for coronavirus 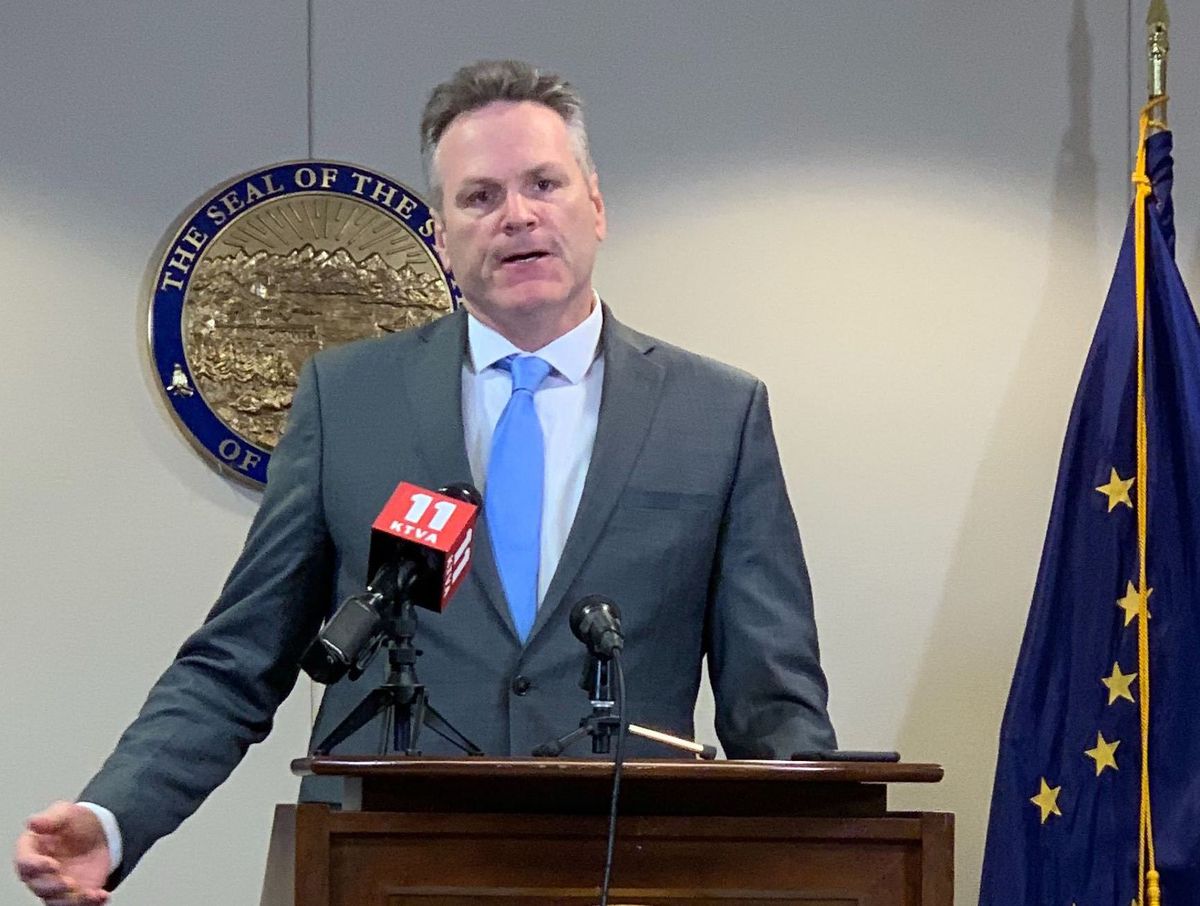 Alaska Gov. Mike Dunleavy speaks to the media Monday, March 9, 2020, at his office in downtown Anchorage about the coronavirus threat in Alaska. (Aubrey Wieber / ADN)

Alaska Gov. Mike Dunleavy speaks to the media Monday, March 9, 2020, at his office in downtown Anchorage about the coronavirus threat in Alaska. (Aubrey Wieber / ADN)

No one in Alaska has tested positive for the spreading coronavirus, Gov. Mike Dunleavy said Monday, and the state’s chief medical officer said officials plan to get word out quickly in the event of a positive test result.

Dunleavy and other state officials sought to reassure Alaskans at a media briefing in Anchorage after reports of accelerating community spread of the coronavirus in states including Washington, paired with crashes in stock and oil markets and a new federal advisory instructing Americans to stay off cruise ships.

“It’s not the end of the world,” said Dunleavy. “I see these things as a momentary glitch.”

So far, the state has tested 23 people and continues to relax the requirements to perform testing every few days, chief medical officer Anne Zink said during the briefing. Currently, the state’s threshold for when to test is more relaxed than that of the U.S. Centers for Disease Control and Prevention, Zink said.

“We’ve been testing fairly aggressively and liberally and we haven’t seen a positive to date,” Zink said. “That can change rapidly."

[Your questions about the new coronavirus, answered]

As other states have increased testing, they’ve seen more positive results, meaning people could have had the virus but just gone undetected. Zink didn’t want to guess if that was the case in Alaska but said the state is working to make sure hospitals are set up for an increase in patients.

As of Monday, the state had the ability to test 500 people, but Zink said private labs are working toward performing tests as well. The state labs are staffed with at least four nurse epidemiologists 24 hours a day.

Because of those limited resources, someone needs to show specific symptoms of the virus, like fever, chills, coughs and shortness of breath, Zink said. Also, doctors will pay special attention to the elderly and those who have traveled to places with high concentrations of the virus.

“The test is at one point in time,” Zink said. “So you may test negative now and then be exposed and then get it later. And it’s going to be more important at that time. So we need to make sure that we’re doing the test on the right people.”

Dunleavy said he and other governors were on the phone Monday with Vice President Mike Pence to talk about the coronavirus. Department of Health and Social Services Commissioner Adam Crum said the state is working to get more federal funds to bolster the response to the virus.

Meanwhile, the city of Anchorage announced Monday that its emergency operations center has been raised to “level two” — meaning it could be staffed 24 hours a day.

Testing is being done at state labs in Anchorage and Fairbanks. If someone outside those cities qualifies for a test, it is done locally and the test kit is flown to one of the labs. It takes three to five hours to process the test, Zink said.

Zink said the state will try to alert the public via the media within an hour of a positive result. More specific information, such as a patient’s age, sex or location, will be case-dependent.

“Say this was someone who just flew here, had no community exposure, went right to the ER, got tested — we wouldn’t announce that to that community because we wouldn’t see there’s a community risk,” Zink said.

Zink said more information would be released on a case that’s determined to be community-spread, where the patient had no recent travel history. Zink said if a test comes up positive at a state lab, that would be released to the public before the case is confirmed by the CDC.

If the virus does spread through Alaska, Zink said, the state has the authority to force-quarantine people.

“It’s something we have practiced and done in the past,” Zink said. “It is not something that we think of or do lightly. There is a kind of check and balance with the court system that we would have to go through to make sure that you aren’t disturbing anybody’s personal liberties.”

Officials have been having that discussion for the past two months, Zink said.

There is no intention to force-quarantine right now, she said. Rather, the state is asking that people don’t visit the elderly, or those with heart and lung conditions. If people feel they have symptoms, they should call a doctor and self-quarantine in their home.

Zink said the state has been talking with the military about what forced quarantine would look like. It depends on the situation, she said.

“It’s really important that we respect individual freedom, but we’re also protecting the health,” she said. “It’d be very different depending on if it’s one person or a community of people. Is it a rural area, an urban area.”

Zink said so far, the state hasn’t asked that any events be canceled. However, she said, they’ve been in contact with organizers from large events like the Iditarod to school basketball teams to go over their specific setting. The state would prefer if events were proactive and canceled if the situation warranted them doing so, she said.