Alaska churches move services online amid the COVID-19 pandemic. People are tuning in. 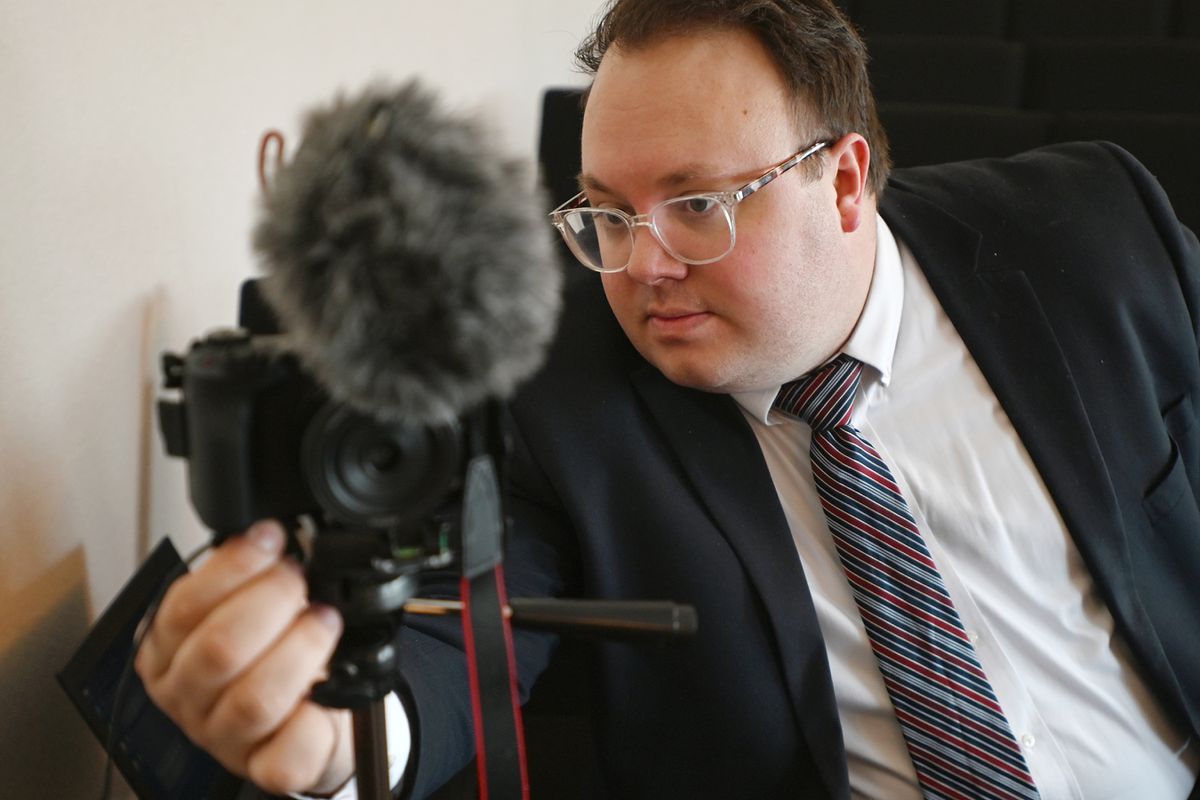 Pastor Derrick Seagraves of The Sanctuary Church of Eagle River had his service video taped on Sunday, March 22, 2020, so it could be later viewed on YouTube and Facebook. (Bill Roth / ADN)

Pastor Derrick Seagraves of The Sanctuary Church of Eagle River had his service video taped on Sunday, March 22, 2020, so it could be later viewed on YouTube and Facebook. (Bill Roth / ADN)

On Tuesday night, Pastor Derrick Seagraves hosted a prayer group from a home studio he made with an ice fishing tent set up in his garage.

As guidelines around the COVID-19 pandemic change rapidly, Seagraves said, the way he ministers to the small congregation at The Sanctuary Church of Eagle River is also adapting. Churches throughout the area are moving services online — and several reported a jump in participation during the last few weeks.

[Alaska’s coronavirus response has escalated as the number of cases has grown. Here’s where things stand.]

Seagraves’ online prayer group was a success — he said more people attended from home than typically show up in person. But transitioning Sunday services to digital has proved more challenging. Pentecostal worship is expressive and involves a lot of interaction from churchgoers, Seagraves said.

“It’s going to be a challenge to bring that to a video,” he said.

Technology posed another problem. Seagraves said the building does not have internet, so livestreaming was not an option. Instead, he set up his phone, a GoPro camera, video camera and sound equipment to record the service. He planned to spend about four hours editing together a video to post to Facebook for the congregation to watch from home Sunday evening.

We're making coronavirus coverage available without a subscription as a public service. But reader support makes this work possible. Please consider joining others in supporting local journalism in Alaska for just $3.23 a week.

Many of the church’s members are reluctant to give up in-person worship, Seagraves said. He allowed them to come to the Eagle River location Sunday with the stipulation that close contact be avoided. The normal handshakes and hugs were skipped, and families spaced themselves out during the service. Cleaning crews sanitized the building before and after.

As of Saturday, no confirmed cases of COVID-19 had been reported in Eagle River, although there are 22 cases statewide, including six in Anchorage.

Seagraves said he wants to remain hopeful that conditions will improve, but understands that the virus is spreading rapidly. He’s preparing for a reality where services may operate with just a few key church members helping to produce a digital version.

“Some people love anything new, so they’re excited about the online services,” he said. “But others worry that if they don’t come in person it might mean their faith is weak. I’m really trying to let them know that it’s OK to stay home or to worship from home.”

Rev. Carol George from St. Mark Lutheran Church in Anchorage said more people viewed their worship service online than the 75 to 100 who normally attend in person. The church livestreamed on Facebook and the video was watched throughout the day.

“I remember during 9/11 our church was full for a few weeks at least,” she said. “People were coming just to check in. I’m hopeful that people are finding now that they can come here to hear good news and connect with others — even if it is digitally.”

George said she worries that older people may not have the technology needed to watch the online services.

“We’re checking in by phone and just making sure people have people there right now to help,” she said.

In-person worship halted March 15 at Anchorage’s St. John United Methodist Church, but Rev. Andy Bartel said that the number of people viewing the services has grown. The church has live streamed Sunday services for several years but the number of viewers increased drastically in the last few weeks.

“On our first Sunday, someone in the livechat observed that the number of people attending online would have equated to an overflowing sanctuary,” Bartel said in an email. “We are seeing former members of St. John who have moved out of state join us in worship again.”

Freya Wardlaw-Bailey, who plays piano during two of the church’s services, said it’s strange to play for an empty church. Instead of dozens or more than a hundred of people watching, there are only a handful of people in the room to produce the stream.

She feels grateful to be able to work still and said music and the arts can be helpful during stressful times.

“It is important for people to have this sense of normalcy, that they can still have their church service in some way,” she said. “I know for a lot of the families that attend St. John, it’s a very big part of their week. I’m grateful that I’m healthy and capable of being a part of that and bringing music to them.”

For Heather Helgeson, attending Anchorage’s Central Lutheran Church with her parents is part of her weekly routine. This Sunday, she watched the service from the kitchen table in her parents’ home.

“The dog doesn’t get to go to church normally,” she laughed.

Although it’s not the same as being physically together, Helgeson said she’s proud to see that the congregation is continuing to reach out and support each other during the stressful time. The church pews usually fill with 100 to 150 members, but the online service had over 200 views Sunday.

She snapped a photo of her family gathered for the service and sent it to her friends.

“We normally text each other photos of the empty pews if someone doesn’t show up,” she said. “So I had to send them a photo to say ‘we’re here!’”

Helgeson said she already misses the regular contact. She misses the hugs from friends in the church and she misses seeing people from all generations gathered together to worship.

“It’s difficult,” she said. “Church is about community, so it’s hard in that regard. ... This has turned the world upside down, but in the upside down we are finding a lot of greatness.”