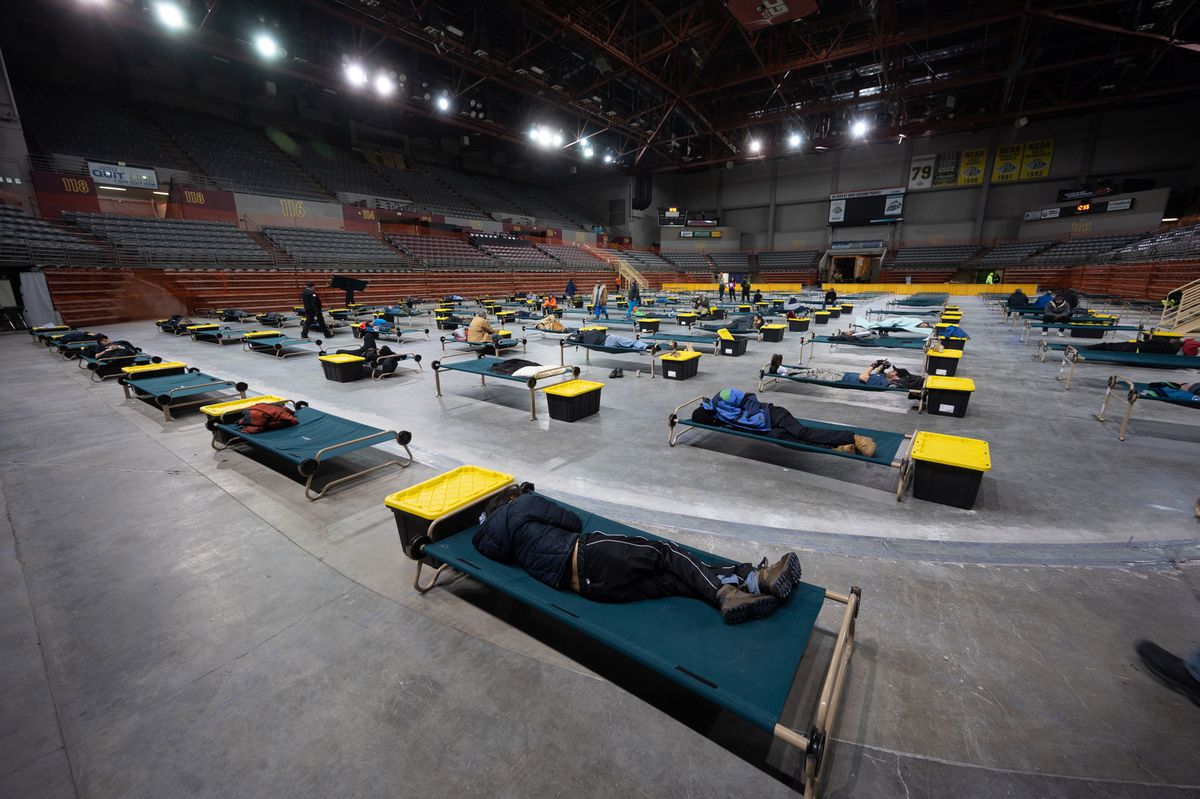 Demand for a spot at the Sullivan and Ben Boeke arenas in Anchorage is running much higher than expected, said Lisa Sauder, executive director of Bean’s Cafe, on Monday.

The sports and entertainment arenas were converted into emergency mass shelters over the weekend to serve Anchorage residents who experience homelessness amid the coronavirus pandemic.

Bean’s Cafe was expecting about 240 people to show up. On Sunday — day two of operations — the soup kitchen and shelter operator served 465 individuals with meals, services and temporary shelter, Sauder said. A total of 339 people slept there.

“It’s a lot more people than we were initially geared up for. We have placed rush orders for more mats and cots,” said Sauder.

The homeless community understands the gravity of the pandemic, she said. That’s why they are using the arenas, giving them better access to soap and water, restrooms and hand sanitizer. There’s also room to sleep 6 feet apart as advised by the Centers for Disease Control and Prevention.

The arenas can accommodate up to 488 people, said Carolyn Hall, communications director for Mayor Ethan Berkowitz. Maximum capacity could be reached soon, depending on the weather, according to Sauder.

Where will the homeless go if the arenas fill up?

“That’s a question for the muni,” she said.

Hall said the municipality, the Anchorage Coalition to End Homelessness and other community partners are working to rehouse as many people as possible.

“We are working on referring clients at the Sullivan and Ben Boeke arenas to other shelter opportunities they qualify for in the community. We are also working to house clients in other more permanent or stable spaces, in order to not reach the max capacity of the campus,” Hall said.

Many of the people staying at the arenas arrived from Brother Francis Shelter, the city’s largest homeless shelter, or at adjacent Bean’s Cafe, a soup kitchen in downtown Anchorage, which also provides emergency, nighttime shelter. The city has an estimated 1,100 homeless residents with many thousands more living on the edge, a number expected to jump amid the economic shockwaves the pandemic is causing.

With coronavirus bearing down on Anchorage, scores of workplaces and public buildings are shut. Bean’s Cafe closed to the public on Saturday morning and immediately began shuttling people to the sports arenas. Bean’s has a four-month contract with the city to provide three meals a day and a place to sleep at the arenas. Brother Francis is partially closed but remains open to elderly and disabled people who lack housing.

During the day, Bean’s maintains a ratio of one staffer per 30 shelter users. At night, it’s one to 50, Sauder said. Two emergency medical technicians are on hand, as well as private security guards. So far, things have gone smoothly, she said. A few people not meant to be at the shelter who were preying on the homeless with illicit drugs were turned away, Sauder said.

Because Anchorage is under a “hunker down” order to slow the spread of coronavirus, Bean’s no longer allows volunteers so two chefs are handling all the meals. The organization is scrambling to hire new workers for the arenas and also for its Children’s Lunchbox program.

The Children’s Lunchbox expanded its food distribution program for needy children on Monday, handing out suppers and pantry boxes at Spenard and Fairview Recreation Centers during scheduled times.

Paula Dobbyn is a reporter for the Anchorage Daily News focusing on homelessness. She's a veteran Alaska journalist who has reported for the Daily News, KTUU and Alaska Public Media.