State to require all travelers arriving in Alaska to self-quarantine 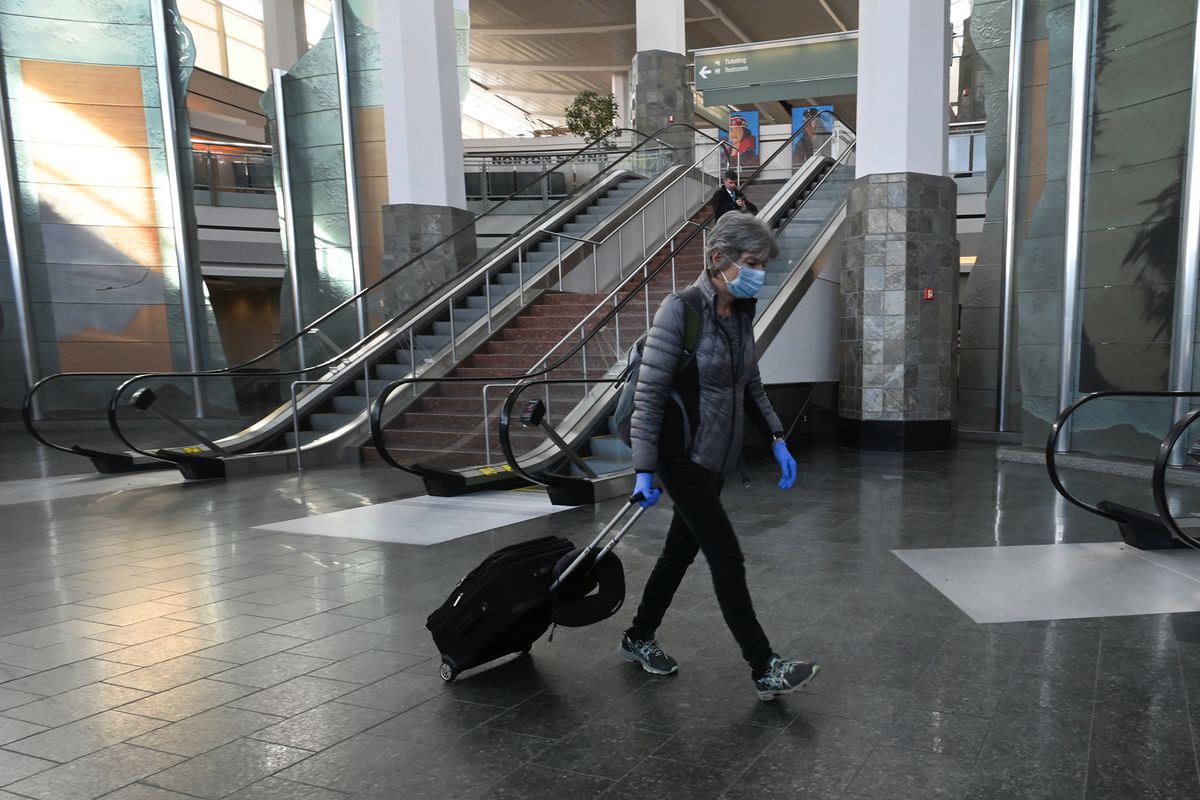 Moving to stall the spread of the new coronavirus in Alaska, state officials on Monday announced a new mandate requiring everyone entering the state from Outside to self-quarantine for 14 days.

Officials also disclosed the state now has 36 confirmed cases of COVID-19, four of which were confirmed to be community spread rather than originating elsewhere. That total also includes four new confirmed cases announced Monday — all involving adults living in Anchorage, and all travel-related.

“I got a call we had really our first community case here in Alaska,” Dr. Anne Zink, Alaska’s chief medical officer, said of a conversation she had Sunday. “That felt like a sucker punch.”

The self-quarantine for travelers mandate goes into effect Wednesday at 12:01 a.m.

People arriving in Alaska must proceed directly from the airport to a quarantine location, such as a residence or a hotel room. They will be required to complete a declaration form issued by the state identifying where they are going to self-quarantine.

The state also announced another mandate, similar to a mandate enacted for Fairbanks North Star Borough and Ketchikan Gateway Borough last week, that limits close contacts between all people outside of families. Anchorage is under a “hunker down" order, with residents urged to stay home if they can and some businesses asked to close.

The state mandate orders that all businesses, congregations or gatherings where individuals are within 6 feet of each other must cease all operations. It also requires that no gatherings of more than 10 people may take place, and if any gatherings do take place, people must be 6 feet or more from each other.

That mandate goes into effect March 24 at 5 p.m.

Gov. Mike Dunleavy said the state was "in a pandemic” that required an at least temporary vigilance to allow health-care facilities to build the capacity they need to treat what’s expected to be rising numbers of patients.

The new mandates come as the governor faces pressure from some in the medical community to order more restrictions before COVID-19 patients overrun the state’s limited health-care capacity.

Previously, the governor’s office had issued only a “strong advisory” that cautioned against nonessential travel and and urged travelers to self-quarantine for 14 days after returning to Alaska. The state’s largest medical association, along with more than 200 individual physicians, asked the governor to ban all non-essential travel.

Dramatic steps are needed to stem the near-exponential spread of the virus already underway in other states and countries, members of the medical community say.

The Alaska State Medical Association, with nearly 500 members, on Monday supported a statewide shelter in place policy, as requested by more than 120 physicians in a letter sent to Dunleavy on Saturday. The association also expressed support for a ban on travel, on the condition that essential travel including cargo flights and flights to rural communities be allowed to continue to ensure no interruption in the flow of medical supplies, personal protective equipment, and other critical items.

The state mandates announced Monday “strike the right balance” but only if Alaskans follow social-distancing and quarantine mandates and follow state guidelines if they have COVID-19 symptoms, said Dr. Eli Powell, an Anchorage orthopedic physician who serves as association president.

“We already have community transmission. ... If we don’t do this now, it doesn’t matter if we ban air travel or not,” Powell said Monday evening. “Alaskans need to understand the next week is critical, critical to this."

Of the 36 confirmed cases, 17 were in Anchorage; seven were in Fairbanks; six in Ketchikan; two in Mat-Su; and one each in Juneau, Sterling, Soldotna and Seward.

Seven of the Anchorage confirmed cases were tested at Joint Base Elmendorf-Richardson. Military commanders on Monday said six of the seven are affiliated with the base, and several appeared to pick up the virus “locally in a community transfer,” which prompted the decision to declare a public health emergency. Officials in Interior Alaska said Monday they also believe community spread is occurring in that region.

Mat-Su officials said Monday they didn’t know the home communities of the patients who tested positive, saying they didn’t get that information from the state. A spokesman for the state health department did not respond to requests for more information.

Anchorage issued an emergency “hunker down” order, which took effect Sunday night, that urges people to stay home and asked non-essential companies to close or limit business. The Alaska Zoo announced Monday it was closing to comply with the order.

A number of communities already started moving to limit travel or install safeguards. Multiple villages moved to ban or restrict passenger air travel starting last week. The City and Borough of Juneau on Sunday ordered all incoming travelers to quarantine for two weeks. The Red Dog mine limited travel in and out of its remote location in Northwest Alaska.