Alaska flight passenger numbers plummet, but cargo traffic is nearly as busy as ever — and flight crews are still coming and going 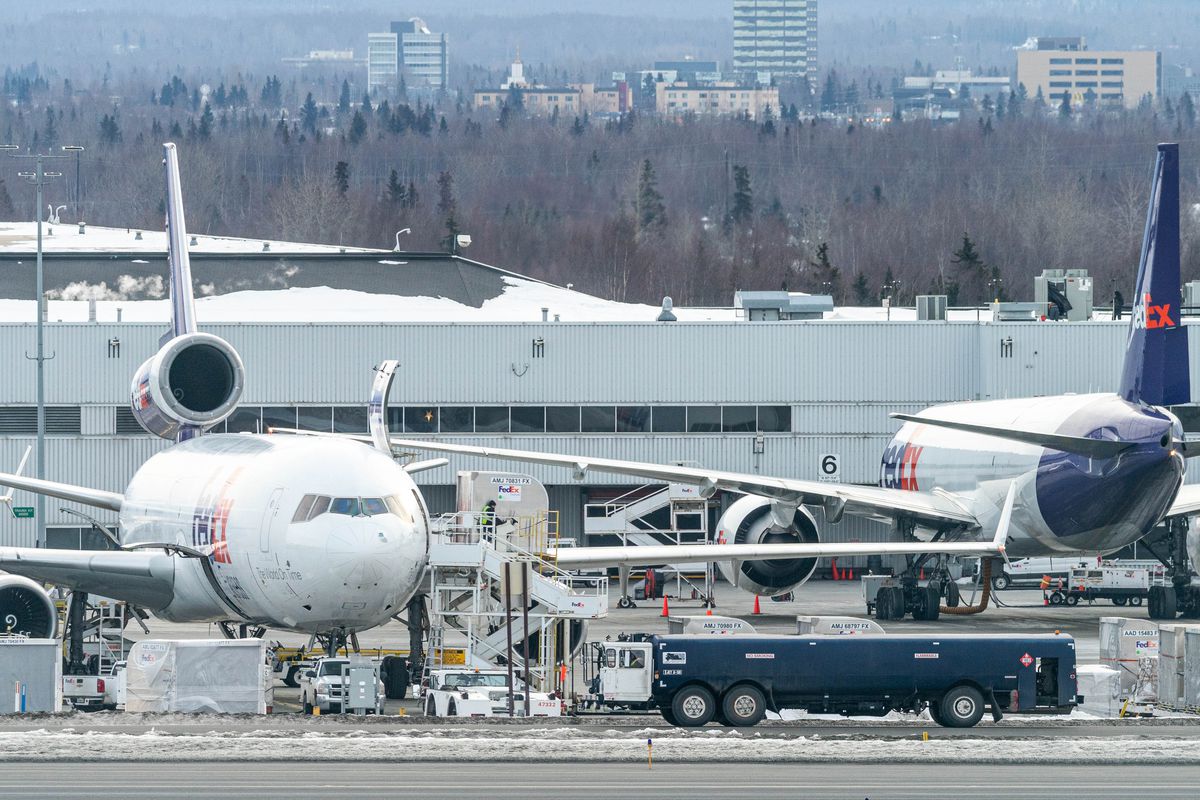 At Ted Stevens Anchorage International Airport, passenger numbers are down 70% from a year ago and continue to fall as major airlines drastically cut back flights amid a collapse in air travel caused by the coronavirus pandemic.

But a steady stream of cargo jets continues to come and go to and from Anchorage, the fifth-busiest cargo airport in the world. On Thursday, 77 cargo flights arrived at the airport.

“While passenger travel is down markedly, cargo traffic remains steady,” said Meadow Bailey, a spokeswoman for the Alaska Department of Transportation and Public Facilities.

Passenger and cargo plane arrivals have one thing in common: Pilots and flight crews are not subject to the full mandatory 14-day quarantine announced by Gov. Mike Dunleavy earlier this week, according to the airlines and the state Department of Transportation.

Pilots and flight crews seen as an ‘essential service’

The exemption has upset some local residents and public officials.

Rep. Zack Fields, an Anchorage Democrat, has asked for the state to “protect Alaskans from cargo flight crew” after Alaska’s first confirmed coronavirus case was announced. The person was a foreign national cargo pilot who self-isolated at the Sheraton Hotel in Anchorage after he began experiencing symptoms, according to state health officials.

The state has not publicly tied any other coronavirus cases to flight crews.

Both passenger and cargo airlines say they are considered part of “Alaska Critical Workforce Infrastructure” and are exempted from the quarantine order. Exempt businesses must submit a plan explaining how they will prevent the spread of COVID-19.

“Aircrew are considered essential industries/personnel and are exempt from the mandatory quarantine,” Bailey said. “However, companies are required to have internal procedures in place to isolate and minimize risk of infection.”

Pilots may be allowed to come and go from the state, but they are not exempt from isolating themselves while in Alaska: “All newly-arrived pilots must adhere to self-quarantine measures during their non-work times,” said Megan Peters, a spokeswoman for the state’s Joint Information Center.

Airlines argue that observing 14-day quarantines wouldn’t allow their pilots and other crew to continue working on regular schedules, moving people and goods around the globe at a time when keeping the supply chain from disruption is crucial.

“Because we provide an essential service to the communities where we fly and aviation is an integral part of the transportation industry, Alaska Airlines will continue operations in/out and around Alaska,” said Alaska Airlines spokesman Tim Thompson.

[RavnAir to temporarily cut 150 employees amid reduction in air travel]

Airport managers say cargo crews are screened “using CDC protocols” while clearing the U.S. Customs and Border Protection checkpoint for cargo entries at the airport, according to the transportation department.

It’s not entirely clear what the federal Centers for Disease Control and Prevention protocols are, but officials have said they involve questions, not physical exams.

Their exposure to Anchorage is limited: “Cargo crews take private transportation to lodging, ordering food in, until their next flight,” Bailey said.

Passenger airline crews include pilots and flight attendants. Cargo crews typically include a pilot, co-pilot and in some cases a third pilot known as an international relief officer.

“The cargo industry recognizes they are at risk of exposure and at the same time, they recognize the need for the supply chain to remain intact and strong,” said Bailey.

[Alaska’s first COVID-19 patient is a cargo pilot who went to an Anchorage hotel before he developed symptoms, officials say]

Pilots are being told to minimize “going into the general population” and observe social distancing, according to Jim Mayer, a spokesman for UPS.

Their services are in high demand, Mayer said: As more Americans stay home, cargo pilots are the ones moving supplies.

Like almost everywhere else in Anchorage, the airport is eerily quiet compared to a month ago.

Nationally, only about 239,000 people went through Transportation Security Administration checkpoints on Wednesday. A year ago, nearly 2.3 million did.

Nearly empty flights have been arriving in Anchorage.

By Wednesday, those numbers had dropped: There were 43 Alaska, 4 Delta, and 13 RavnAir landings — but they brought a total of only 800 passengers.

The frequency of Alaska flights is expected to plummet in coming days and weeks.

Alaska Airlines, the single biggest provider of passenger air service to and from the state, announced Wednesday afternoon that it would slash its scheduled flights by 70% for April and May due to what it called a “historic and unprecedented” collapse in air travel.

Details of the new schedule are still being worked out, said Alaska Airlines spokesman Thompson.

In some ways, the airport is an oasis of semi-normalcy in a time of lockdown.

Airport restaurants are still open and operating under an exemption to the mayor’s closure of all restaurants and bars for dine-in service. The idea is that it’s safer to seat people 6 feet apart in restaurants than let them eat takeout at the gate, according to the state transportation department, which operates the airport.

Health screening is spotty. Some carriers, such as RavnAir, are using contractors to screen some, but not all, passengers with coronavirus-related questions before they board flights to remote Alaska communities and work sites. But not all carriers are taking similar steps.

As of this week, the state mandated that all arriving passengers must fill out a “travel declaration form” that includes details about where they will be spending a mandatory 14-day isolation quarantine. People must swear, under penalty of perjury, that they will follow the rules.