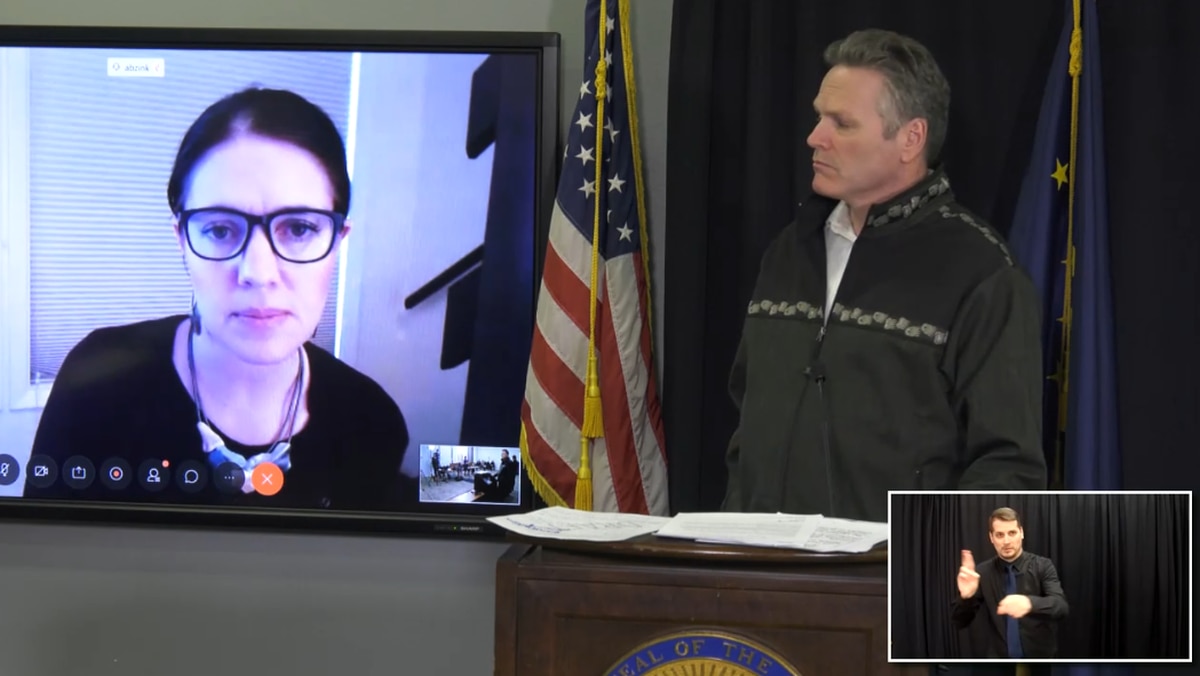 As state officials announced some of the first steps to stabilize Alaska’s stumbling economy Tuesday, they also announced another 14 new confirmed COVID-19 cases.

That number includes a worker at BP Alaska’s Prudhoe Bay oil field who tested positive for the infectious disease caused by the novel coronavirus, according to Dr. Anne Zink, the state’s chief medical officer.

The new cases bring Alaska’s total to 133. They include five new cases in Fairbanks, four in Juneau, two in Anchorage, two in Eagle River/Chugiak and the first confirmed case in Kenai. Two are older than 60, 10 between the ages of 30 and 59, and two between 19 and 29.

Three Alaskans have died of the virus. Nine have been hospitalized, a slight increase from Monday.

The state is trying to build its own epidemiological model that takes into account the unique way Alaskans move within such a large state to predict the virus’s peak, Zink said during a press briefing Tuesday evening.

That model, in combination with three others, shows a wide range depending on how Alaskans apply social distancing measures and tolerate them: anywhere from the end of April until July, Zink said.

The goal is avoiding a sharp peak and keeping the curve “pushed as low as it could go,” she said.

At this point, Alaska’s numbers are “not yet on an acceleration phase like New York is having,” Zink said. “And we really need to keep it there.”

BP and other oil companies have taken unusual steps to keep the virus out of the remote oil camps in Arctic Alaska, including temperature checks and travel screenings before workers can board jets to the oil fields. Tuesday’s confirmed case marks the first associated with the North Slope oil fields.

The worker, an Alaska resident, had previously traveled out of state but returned before the state issued a mandate on March 23 requiring travelers to self-quarantine for 14 days after arriving here. The man, whose community was not identified, traveled to the North Slope on March 25 and displayed symptoms within two days of arrival, according to a statement from Alaska Department of Health and Social Services Commissioner Adam Crum issued after the briefing.

The worker was tested and put in quarantine, as were his “immediately identified close contacts,” Crum said.

BP had a plan in place and was able to test and identify the virus, quarantine other people and isolate the infected worker, Zink said during the briefing. The state is working with the company on travel plans and mitigation strategies, officials say.

About 39% of BP’s Prudhoe Bay workforce of about 1,000 employees live out of state, spokeswoman Megan Baldino has said.

The state on Tuesday also unveiled a series of steps described by Gov. Mike Dunleavy as asking the state’s economy to “freeze in place" as residents stay home and businesses are forced to shut their doors, at least temporarily.

“We’re threading a needle here (so) we can take care of the health of Alaskans but also make sure we have an economy to get back to,” Dunleavy said.

The office is designed to handle 250 calls at at time. Every available staff member is now working the phones, Ledbetter said.

“If you call our main number, we are taking those names and we are actually calling you back,” she said, urging Alaskans to first file a claim, then make sure it’s filed either by phone or online.

The governor issued a disaster order of suspension that applies through May 11. Among the related steps announced Tuesday:

• Deferral of business license fees and professional license fees as well as a new Alaska Industrial Development and Export Authority program that allows Alaska businesses with lines of credit through an Alaska lending institution to apply for a loan increase of up to $1 million.

The agency’s commissioner, Jason Brune, said the state is “not lessening any requirements on environmental protection." Instead, rural communities will have to uphold air and water monitoring requirements, for example, without agency employees traveling there.

“We don’t want them to be vectors,” Brune said.

Dunleavy said the state plans to roll out additional economic measures this week.

Though the Alaska Legislature failed to approve a supplemental Permanent Fund dividend intended as an economic stimulus, Dunleavy said he believes lawmakers could change their minds after hearing from constituents.

With the Legislature technically in session through May, lawmakers could still reconvene and approve a payout.

“I’m hoping the conversations they’re having with constituents and with each other would facilitate them getting together,” he said.

Many Republican members of the House supported the governor’s idea, as did Sen. Mike Shower, R-Wasilla, but the House’s coalition majority opposed it.

Rep. Chuck Kopp, R-Anchorage and a member of the majority, said Sunday that the supplemental dividend would have created a “devastating draw on the earnings reserve.”

The Permanent Fund’s spendable earnings reserve contained $16.1 billion on March 16, but roughly half that total is already committed. A $1,000 spring dividend, supported by some lawmakers, would have cost $680 million — within the reserve’s means but above a 2018 cap on spending from the earnings reserve.

The governor acknowledged that cost and the potential consequences for future state earnings but said Alaska is in an immediate crisis.

“You deal with the disaster, the catastrophe, you have right now,” he said.

Correction: A previous version of this story reported, based on what Dr. Zink told reporters Tuesday evening, that the BP Alaska worker was from out of state. DHSS commissioner Adam Crum later issued a statement correcting what Zink said, clarifying that the worker was an Alaskan who had traveled out of state.