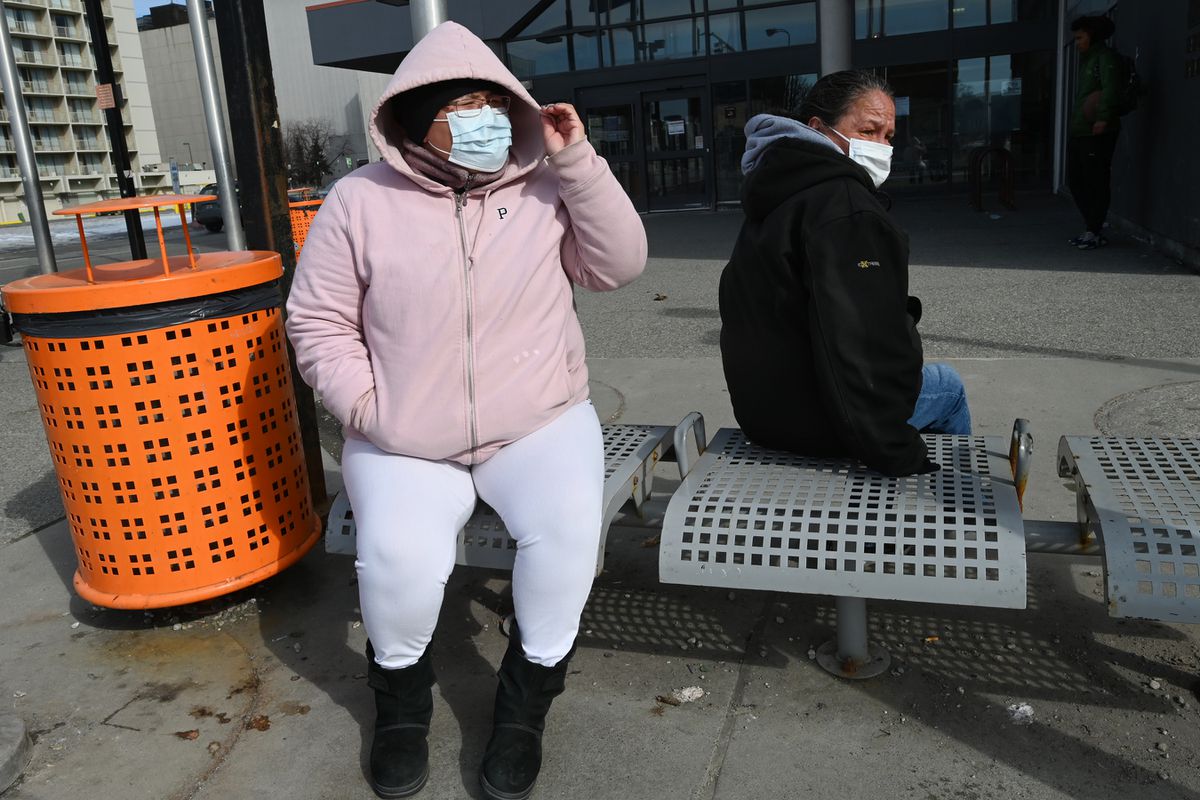 Melissa Jack, left, waits for a bus at the downtown transit center on Sunday, April 5, 2020. Jack said she wore a mask for the first time because she was riding the bus. People Mover will temporarily suspend fixed-route service at 11:59 p.m. on Wednesday, April 8. (Bill Roth / ADN)

Melissa Jack, left, waits for a bus at the downtown transit center on Sunday, April 5, 2020. Jack said she wore a mask for the first time because she was riding the bus. People Mover will temporarily suspend fixed-route service at 11:59 p.m. on Wednesday, April 8. (Bill Roth / ADN)

Alaska’s COVID-19 outbreak is continuing its spread into rural communities with a confirmed positive case in Bethel as well as a gold mine worker near Delta Junction.

The state’s COVID-19 count grew by six to 191 confirmed cases of the infectious disease caused by the novel coronavirus as of Monday, not counting the Bethel case. Three more patients needed hospitalization for a new total of 23, according to the Alaska Department of Health and Social Services. Six Alaskans have died of the virus; at least three of them were infected out of state.

Twenty-four Alaskans have recovered from the virus, health officials say.

The Bethel patient is self-isolating, according to the Yukon-Kuskokwim Health Corp. Officials there are working with the state and local government officials to protect close contacts with that patient.

“This first case in our region highlights the importance of adherence to prevention guidelines including quarantine, social distancing, regular disinfecting, and regular handwashing,” YKHC officials said in a statement. “Help protect your community by staying home.”

The state reported two new cases in Anchorage and one each in Eagle River, Petersburg, Fairbanks and Soldotna. Cases are reported based on a patient’s home community, not necessarily where they became infected.

The Petersburg case marks the first infection in that Southeast Alaska island community of about 3,000 residents. A 76-year-old Petersburg man, Pete Erickson, died of the virus while hospitalized in Washington state after contracting it there.

The person traveled to the Lower 48 and returned home in mid-March, according to a statement from the Borough of Petersburg and Petersburg Medical Center. They “took all necessary precautions to stay home and isolate" and were tested in late March after experiencing mild symptoms. They are improving now, and local officials say they are working with the state to identify anyone who had close contact.

[First COVID-19 case appears in Bethel, but not everyone wants to be tested]

Corporate officials on Sunday confirmed a positive test for a worker at the Pogo gold mine near Delta Junction who potentially came into contact with 14 coworkers.

The Pogo worker, who lives in Fairbanks, tested positive for COVID-19 four days after coming off a 12-day shift at the mine, according to a news release from Pogo owner Northern Star Resources. He is with family, without “serious symptoms or complications” and getting medical care from the company’s medical providers.

Eight employees who potentially came into close contact with the infected worker are in self-isolation and being transported off site as soon as possible, the release said. Six more potential close-contact employees were on leave and informed of the positive test.

All the workers who potentially came into close contact will spend the next two weeks in self-isolation, company officials said. The company already introduced “elevated hygiene” and social distancing protocols.

The state has put in a request to the Federal Emergency Management Agency for the authority to fly non-emergency patients from rural communities to the Anchorage area for “a higher level of care,” said Bryan Fisher, a state incident commander. The Alaska National Guard, Department of Defense, Coast Guard, Alaska Air Carriers Association and air medical companies are involved.

Fisher also announced locations for extra medical capacity: In Anchorage, there are plans underway for 150 beds at the 5,000-seat Alaska Airlines Center; in Fairbanks, the state has rented the 4,600-seat Carlson Center; and in Mat-Su, plans call for using a large skilled nursing facility getting ready to open. Fisher said schools in Bethel and Kotzebue could be used to add capacity, as could medical tents in front of hospitals in Southeast.

“We’re looking for resources where we can find them,” Dunleavy said, saying the search involved providers within Alaska and outside, even in other countries.

Pogo employs close to 500 people, but it wasn’t immediately clear how many were on site at this time. The mine continues to operate.

The virus has been reported at at least one other industrial camp setting in the state. A worker at BP Alaska’s Prudhoe Bay facility who tested positive for the virus last week was isolated and others who came in contact with him were quarantined, company officials said.