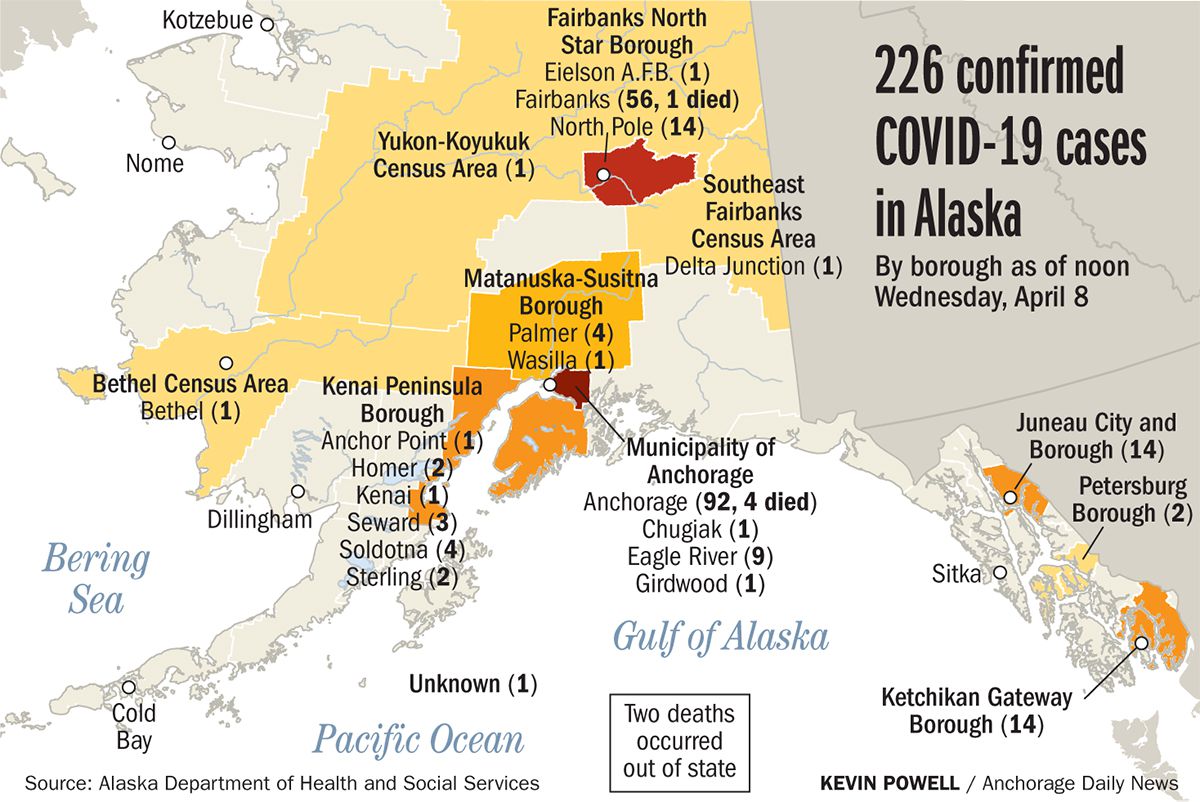 An Anchorage woman in her 40s died from the illness on Tuesday after being hospitalized locally Sunday, according to a statement from the Alaska Department of Health and Social Services and data published on its COVID-19 cases website. Officials believe her case involved community transmission of the new coronavirus, and Zink said Thursday that the patient had underlying health issues.

The woman’s death marks the seventh tied to COVID-19 among Alaskans. Previously reported fatalities largely involved people over the age of 60 with underlying health issues, and included the deaths of two Alaskans who were out of state at the time.

[Hundreds of younger Americans have now been killed by the coronavirus]

The total number of Alaska residents who have tested positive for the illness caused by the new coronavirus was 226 on Wednesday, up from 213 the previous day.

The state publishes COVID-19 figures based on how many Alaskans have contracted the disease and lists them by residency. The figures, in some cases, don’t necessarily reflect the communities where people fell ill or were tested. The state’s health department reports the previous day’s confirmed cases that following day by noon.

Zink said Wednesday that the state won’t be able to show more clearly where people became infected or how the cases came about, unless health officials believe COVID-19 has reached a new community. For example, if officials believe that a non-resident contracted the illness in a community with no confirmed cases, “that would be really important information for the public to know,” Zink said.

“I think we all need to assume at this time that this is amongst our communities for the most part, and even boroughs and communities that have not been identified," Zink said. “You know, this was once a disease in one country, and now it’s around the world. It spreads quickly, it spreads easily, it spreads without knowing.”

One of the people who recently tested positive for COVID-19 was a Tanana Chiefs Conference employee, said TCC Chief Victor Joseph. The case was still under investigation on Wednesday, Joseph said.

Anchorage Mayor Ethan Berkowitz said Wednesday that the number of people hospitalized for COVID-19 in the city had risen from five to nine.

Alaska recorded 27 total hospitalizations statewide Wednesday, an increase of four, while 32 people have recovered from the illness, according to state data. So far, 7,068 people have been tested for COVID-19.