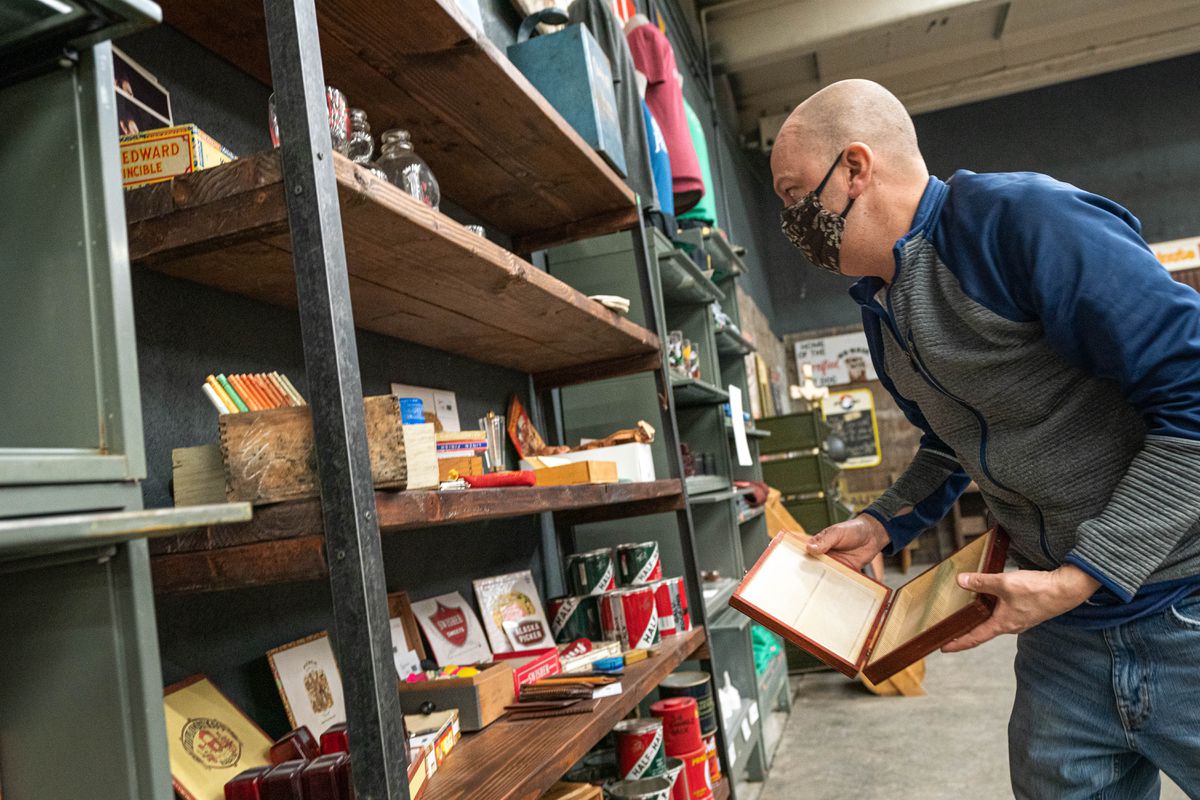 Owner Kelly Turney prepares for the Friday opening of his antique store, Alaska Picker, on Thursday, April 23, 2020 in Palmer. The store has been closed for a month due to concerns over the coronavirus. (Loren Holmes / ADN)

Owner Kelly Turney prepares for the Friday opening of his antique store, Alaska Picker, on Thursday, April 23, 2020 in Palmer. The store has been closed for a month due to concerns over the coronavirus. (Loren Holmes / ADN)

During Gov. Mike Dunleavy’s nightly news conference Thursday, one question in particular was hard to answer: Can cities tailor their own plan to reopen businesses shuttered by the coronavirus pandemic, or would they have to follow a plan laid out by the state?

The question arose after the state’s initial plan included a clause that said implementation was mandatory, making it unclear whether local communities such as Anchorage would be able to control certain aspects of reopening. Later, that section was deleted. But whether that means the clause is now null was not answered.

Dunleavy spokesman Jeff Turner said Thursday night that the state’s legal department would review the issue and render a decision Friday. That is when Dunleavy’s plan goes into effect.

In the original mandate, the state argued it was critical to have continuity in opening up the economy.

“Conflicting local provisions will frustrate this Mandate’s health and economic objectives and, therefore, are irreconcilable with this Mandate’s purposes,” a previous version of the mandate stated.

When asked to clarify the change, Dunleavy said the first version of the mandate was written in accordance with the law, but officials didn’t want local government to “feel the heavy hand of the state.”

“We feel it’s not necessary to have that in place,” Dunleavy said.

The change, Turner later said, was the governor’s decision and was not prompted by complaints from city leaders.

Dunleavy said there will be some communities that, for specific reasons, must have an exception from the mandate.

When further pressed on whether deleting the language from the mandate means local government has autonomy to open their economies up as they choose, Dunleavy said he will collaborate with local government. If a community wants to apply stricter rules, the state will engage in a conversation and look at the data in that specific city or borough.

Dunleavy did not say whether cities will have full autonomy to open their economies how they want.

That is a power that Anchorage Mayor Ethan Berkowitz has repeatedly said he has. Earlier in the week, he said that authority is granted to him by the Alaska Constitution.

“It’s very clear that the municipality has the right to have stricter standards in place,” he said. “I don’t think that’s an issue that’s under dispute.”

Berkowitz has not yet detailed his plan, which he said will be released during a news conference at noon on Friday. During a radio appearance Thursday night, he said it was still being finalized. Earlier in the week, he said his plan is similar to the state’s but did not describe how they might differ. A request for comment from Berkowitz was unanswered Thursday night.

When asked about the language in the state mandate during his weekly radio show, Berkowitz said the state has deleted that portion of the mandate.

“The idea that we can’t is no longer present,” he said.

Dunleavy on Thursday repeatedly said the power lies in the hands of the state.

“The state has the constitutional authority to oversee the pandemic, this emergency that we’re in, the emergency declaration,” he said.

When asked about the difference in interpretation of the state constitution, he said that was a question for the state’s legal team.

“I haven’t pored over the legal documents, but what’s most important to me is the ability for all of us to work together to defeat a common enemy — this virus — and get Alaska back up on step with regards to its economy," Dunleavy said.

In addition to the removal of language about local control, the state on Thursday added guidelines on child care, lodging and campgrounds, gyms and fishing charters to the mandate, and clarified other points of confusion. Travel throughout the state, previously banned, is now encouraged as long as it’s on the road system.

Dr. Anne Zink, the state’s chief medical officer, said the state looks at several metrics when assessing how communities and the state are reopening amid the virus.

First, Zink said public health officials look at how many cases are spread from travel or throughout the community. Then, the state will monitor how widely people are being tested. Third, the state will need to continue contact tracing — finding people who are sick and quarantining their close contacts. Finally, Zink said the state looks at a health care system’s preparedness, both in local communities and statewide.

While in transit, they will need to carry documentation showing they are a critical worker and allowed to travel into Alaska. Captains are encouraged to limit the number of crew members in tight spaces, and encourage proper hygiene. Interaction with on-shore workers is to be as limited as possible. Captains will need to sign a document acknowledging the regulations.

On Thursday, the Bristol Bay Area Health Corp. joined other groups in the region raising concerns about the risk this year’s salmon fishing season could pose to local communities, releasing a statement asking that the fishing season stay closed due to concerns about cases of COVID-19 overwhelming health care resources.

“Historically, we’ve been able to accommodate and care for the influx of visitors and their related fractures and other injuries typical of the fishing season,” BBAHC President and CEO Robert J. Clark said in the statement. “However, if COVID-19 comes to our region, even the handling of our summer injuries may be next to impossible. We are genuinely concerned about our capabilities to absorb several hundred potential COVID-19 cases.”

Dunleavy was asked about several organizations criticizing his move to start opening the economy. Those opposed to his action need to look at science and data, he said.

“We cannot hunker down indefinitely,” he said.

“Our economy is in bad shape, and it’s getting worse every single day,” he said. “Does that take precedence over health? No, and I’ve repeated many, many times that it doesn’t. But we have to be careful that we don’t fall into a trap or a narrative that if you have an economy, you’re going to make people sick.”

The state reported two new cases of COVID-19 in Anchorage residents on Thursday, including a boy under the age of 10 and a man in his 60s. No new deaths or hospitalizations were announced.

Several children have tested positive for COVID-19 in Alaska, and Zink said generally they tend to do better with the illness than older adults. She said that doesn’t mean children can’t get very sick from COVID-19, and they can be at a higher risk for the illness if they have underlying medical conditions. She said that Alaska’s cases include a wide age range and pick up the “broad spectrum of disease within the state.”

The State Medical Examiner Office has a low threshold for performing COVID-19 tests on people who have died, Zink said. They’ve tested people who may have died for a variety of reasons, Zink said, and the state hasn’t found any COVID-19 cases through those methods.

Guidance on funerals, religious services and other gatherings was set to be released by the state on Friday, according to Alaska Department of Health and Social Services commissioner Adam Crum.