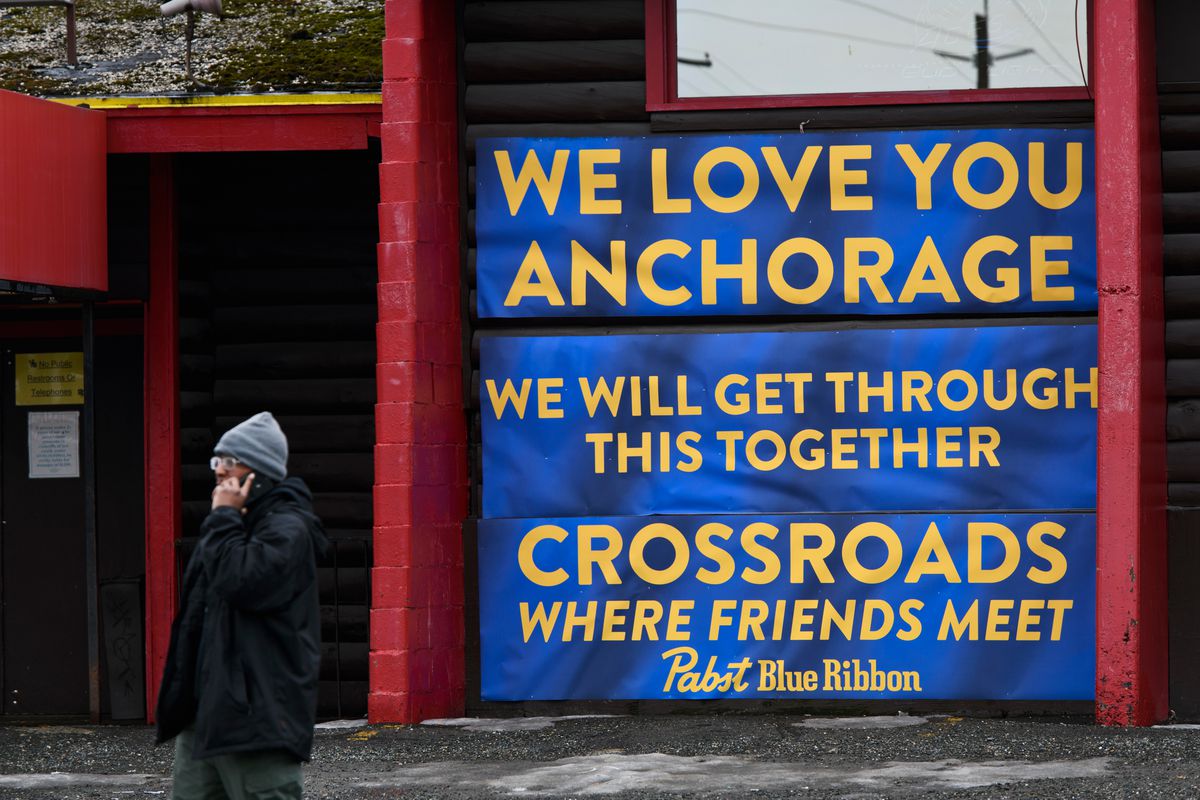 A sign hangs on the outside a closed Crossroads Lounge on April 16, 2020, in Anchorage. (Marc Lester / ADN)

A sign hangs on the outside a closed Crossroads Lounge on April 16, 2020, in Anchorage. (Marc Lester / ADN)

The state of Alaska on Wednesday evening announced the second phase of its economic reopening plan, which includes the limited reopening of gyms, bars and theaters beginning Friday.

Those businesses have been closed since March 18 under a statewide health mandate. In Anchorage, their reopening may take longer, according to the mayor.

Under the state’s plan, fitness centers may open on Friday with 25% capacity — allowing 10 feet between each person — and outdoor fitness classes can accommodate as many as 50 people, said Adam Crum, Alaska Department of Health and Social Services commissioner. Swimming pools can reopen at 50% capacity beginning Friday, Crum said in a media briefing Wednesday.

Bars, libraries, theaters and other entertainment venues may also open Friday at 25% capacity, according to Crum.

After the updated state restrictions take effect, religious and social gatherings may include as many as 50 people, but with social distancing guidelines, Crum said. Previously, such gatherings were limited to 20 people.

Restaurants — previously operating at 25% capacity for dine-in service — on Friday may expand to 50% capacity, as can retail and other businesses statewide, Crum said.

Visitors will be able to patronize many businesses without a prior reservation, Crum said. Personal-care services may operate at 50% capacity, but they will still operate by reservation only and screen customers by phone ahead of time, Crum said.

The details of the plan were summarized verbally and reflected in a slide presentation during Wednesday evening’s briefing, but a detailed, written phase two plan will not be released until Thursday.

The move is part of a ramp-up of what Gov. Mike Dunleavy called a “personal responsibility” plan. Dunleavy said he expects phase two to be brief. If the numbers hold, he said, state officials will begin talking next week about moving to phase three “quickly.”

“As we go through his process of opening up more and more and more, it’s really going to fall on individuals to make sure we don’t cause a spike in the number of cases,” Dunleavy said.

[As Anchorage slowly reopens, city is warned of two possible paths — a slow recovery, or none at all]

Positive cases of COVID-19 in Alaska remain fairly flat, though on Wednesday the state announced the first death since April 12. The state has announced 372 positive cases and 10 deaths.

Also announced Wednesday was the first case in Cordova, where a seafood processing worker who had traveled from out of state tested positive Tuesday night. Cordova residents have expressed concerns about the potential for an outbreak in the town as the Copper River salmon fishery, which opens in mid-May, brings an influx of workers from out of state.

Dunleavy said the second phase of the state’s economic reopening plan will roll out at different times in different cities, but he expects most places to make the transition between Friday and Monday.

On Wednesday evening, Anchorage Mayor Ethan Berkowitz said he and his staff will review the data on Friday and make a decision.

“If all the data is looking good, we will open Monday,” he said.

State officials are still urging everyone to continue wearing cloth face coverings, washing hands often and sanitizing surfaces. They’re also asking that employees be screened for symptoms at the beginning of shifts.

Dr. Anne Zink, Alaska’s chief medical officer, said the state is still aiming to prevent rapid spread of the new coronavirus. Zink said she met with the state’s epidemiological team and “had a long, long conversation about all the pluses and minuses and all the aspects of what we can do to keep case numbers low and keep moving forward.”

With the expectation that Alaska will see more cases of COVID-19, Zink said the state health department has a goal to build a 500-person team to do contact tracing by the end of May if needed. There are over 100 people doing that type of work currently, Zink said, and the expanded group would be ready in case of an outbreak.

State officials said upcoming reopening measures involve expanding travel within the state and capacity at child care facilities, in addition to the reopening of overnight camps and organized sports.

Officials expect a rise in COVID-19 cases as a result of loosened regulations, Dunleavy said. To keep the number of new cases low, the state has opened up more hospital capacity and ordered more personal protective equipment for health care workers. The state has also increased testing capacity to be able to spot a spike in cases, Dunleavy said.

“We expect more cases as there’s more mixing,” he said.

Crum, the health and social services commissioner, said the specifics of phase three will be determined by how people behave during phase two, such as whether they remain socially distant and wash their hands.

According to a document provided by a Dunleavy spokesman after the briefing, phase three includes opening up most businesses, such as restaurants, to 75% capacity.

When asked about how the state plans to enforce the restrictions, such as capacity limits in bars, Dunleavy said businesses and individual Alaskans want to do the right thing. Additionally, customers and businesses can publicly pressure each other to follow the policies.

Businesses and governments around the state have complained about the movement to loosen restrictions with little warning, creating confusion on how to comply with the new orders.

Dunleavy said he feels the state has communicated very well, but this is a fast-moving situation.

In response to a question about Juneau officials expressing frustration about moving into a second phase of reopening without knowing the details of the plan, Dunleavy said all of the phases were released on the state’s website when his administration initially released the plan for the first phase.

On Wednesday evening, there was no guidance on the second component of the reopening plan posted to the state’s website after the conclusion of the media briefing, but rather a note that the plan would be released Thursday.

A spokesman for the governor’s office emailed a phased plan to the Daily News after a request from a reporter.

As people leave their homes more in this next phase of reopening, Dunleavy said it’s critical to remain distant from one another and wear a mask. Continue to limit trips to the store, he said — it’s all part of showing personal responsibility.

Anchorage Mayor Berkowitz agreed that such precautions are critical as businesses continue to open up.

“We should not let our successes right now cloud our judgment about being careful in the future," Berkowitz said.