State officials recommend masking up, but for some Alaskans, it’s not happening 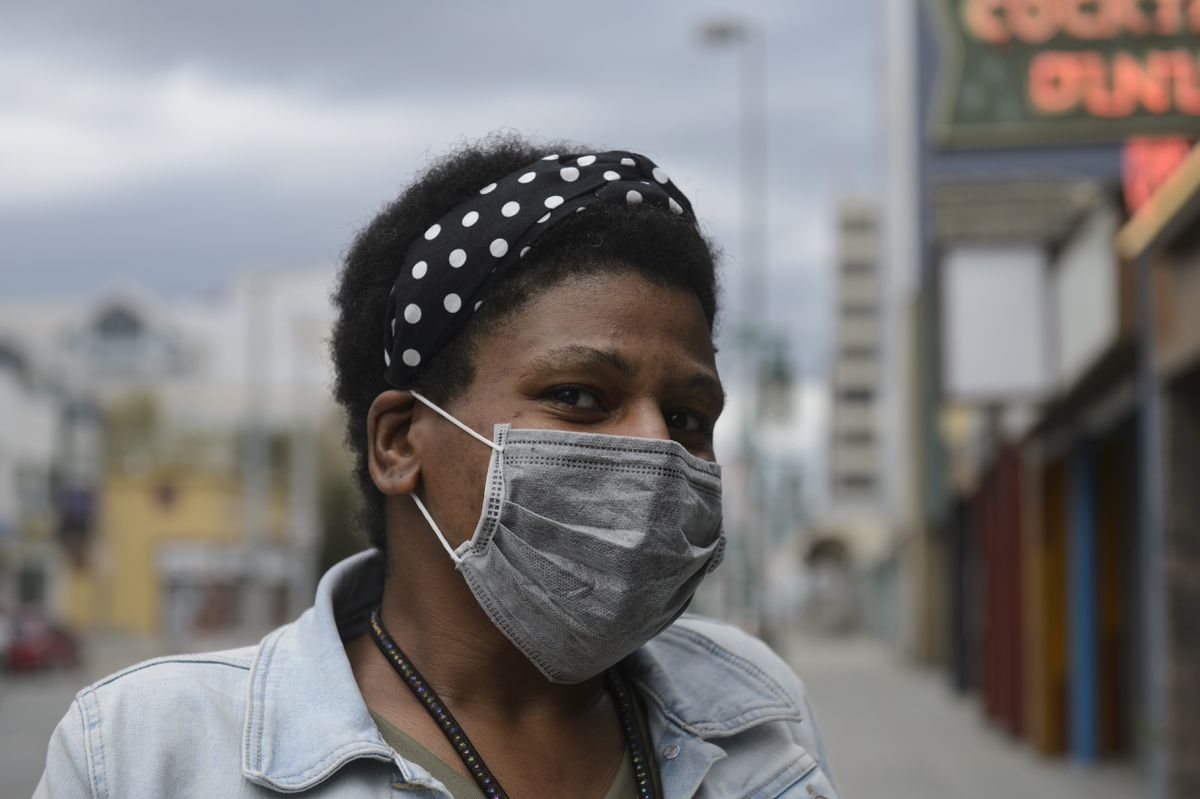 PALMER — A long line snaked out of the lobby and halfway down the hall at the Palmer post office Monday afternoon.

Out of maybe two dozen people waiting, just two or three wore masks as recommended to safeguard others from COVID-19, the infectious disease caused by the new coronavirus.

Then one of the few mask-wearers pulled his down to his chin and started playing “Tennessee Waltz” on a harmonica.

Standing outside later, Kenneth Cowart said he brought the mask only because he had one at home in the nearby community of Butte. He moved there from Georgia about a month ago to be with his sweetheart, Sue Houser. They met in the 1950s and hope to marry.

Both are seniors, a demographic that’s been targeted for serious infection or death by this particular virus, though Alaskan fatalities remain low.

Houser has lived in Alaska on and off since 1959, the year the territory became a state. She had no interest in wearing a mask.

The state’s COVID-19 numbers are among the best in the country. As of this week, Alaska had about 50 active cases out of just over 380 total confirmed. Ten Alaskans with the virus have died; 38 have been hospitalized.

Alaska doesn’t require universal face coverings, though they are required for some businesses such as salons as the economy reopens.

Some businesses, including Costco, aren’t allowing unmasked customers in stores. Others like Dark Horse Coffee in Anchorage hope customers will do the right thing. A sign outside reads, “Help us help you. Thank you for wearing a mask.”

In a quick and totally unscientific survey this week, a fair number of people on sidewalks and in parking lots — but not on trails — covered their faces with homemade cloth masks and medical-grade ones for errands in Anchorage, Palmer and Wasilla, Dunleavy’s home base.

The mask schism plays out between wearers wanting to protect others and spread a message of caution, and non-wearers skeptical of virus potency claims and the science of masks. Some people also might just not be able to find or buy masks.

It doesn’t help that the Centers for Disease Control and Prevention guidance flipped on the subject. Through March, the CDC told healthy Americans to avoid masks to preserve supplies and emphasized social distancing directives. In early April, the agency began recommending all Americans wear non-medical masks for essential trips like grocery shopping. The World Health Organization is still telling healthy people not to wear them unless they’re caring for someone with COVID-19.

Various studies indicate masks can reduce viral spread in public settings by blocking droplets. State health officials say masks should be worn over the mouth and nose, not touched while they’re on, and removed carefully to avoid contact with the front.

Even David Eastman, a conservative and notoriously contrarian state representative from Wasilla with EMT training, touts mask-wearing. Eastman was the first state legislator to openly wear one during the legislative session in Juneau, along with eye protection.

“Wear a mask in any public place. Just do it,” he posted on his personal Facebook page in early April. A similar post appeared on his legislative page.

Eastman, in an interview this week, said the posts were originally meant to counter messages from the CDC and others discouraging mask wearing.

“We just don’t know what the long-term health consequences of this are,” he said. “People are recovering but we don’t know if they’re going to reach a point where their lungs aren’t recovering anymore ... until we can get through this and get more accurate data, I think it’s important that we take precautions.”

Jamie Reyes wears a mask “all the time” if she’s going out in public. She was masked Monday as she left Big Ray’s, a downtown Anchorage clothing store and outdoors outfitter where Reyes and her son were buying work boots for his summer job on a farm.

“I think Dr. Zink has done a great job with outlining how we can best protect fellow Alaskans, especially with these types of masks," Reyes said. "I know that I’m protecting you and you’re protecting me.”

About half of people she sees out and about are taking precautions seriously, she estimated. “I definitely feel like employees with the new businesses that are opening back up are taking things very seriously. So, that’s really reassuring.”

A different scenario unfolded in the packed parking lot of Wasilla’s Walmart.

Some shoppers entered the store wearing masks. Many others didn’t. Employees took a smoke break at a shopping cart corral, masks off and standing close together despite state recommendations to stay at least 6 feet apart.

Many shoppers outside didn’t want to talk. One did, but didn’t want to use her name. She was in her 20s, loading a child into the back of her white SUV. She didn’t have a mask.

A Palmer resident out grocery shopping was wearing a mask -- grudgingly.

Shirleen Beach said she thought the reaction after the first two weeks of restrictions was “overblown” for a virus she believes has been in Alaska far longer than March when the first confirmed cases popped up.

But people get upset when you don’t wear one, she said. And her husband is in a vulnerable age group.

The governor was asked about masks at a Monday evening briefing joined by Dr. Alexander Eastman, the top doctor at the U.S. Department of Homeland Security, who is touring rural communities here this week.

Dunleavy said he wears a mask or brings a bandanna while shopping.

Eastman wore a mask, pulling it down when he came to the podium to speak, and said the practice is necessary whenever people can’t maintain social distancing because infected people without symptoms can spread the virus without knowing they carry it.

“Wearing a mask in public right now is essentially like covering your mouth when you sneeze under normal conditions,” he said. “When you don’t cover your mouth, everybody would look at you like you’re rude and uncouth ... it’s just common courtesy to wear a mask right now."

They were immediately criticized in online comments.

Zaz Hollander reported from Palmer and Marc Lester from Anchorage.