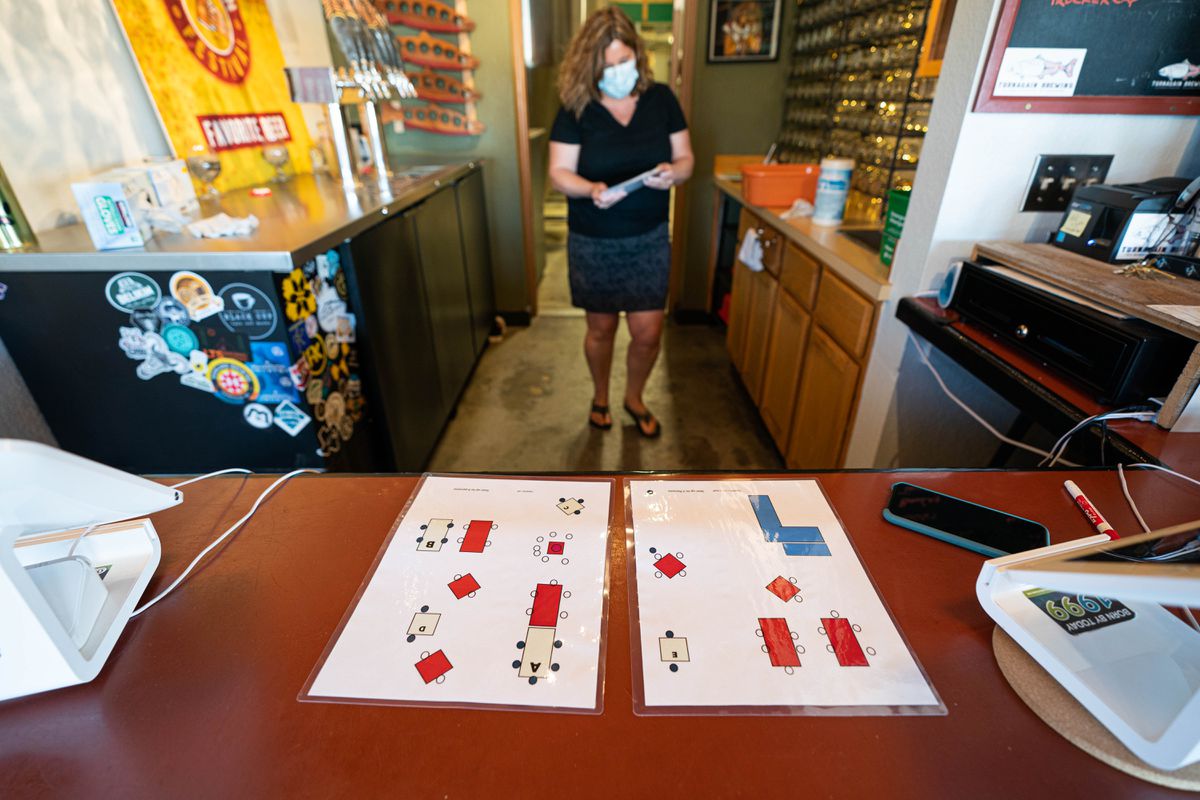 Turnagain Brewing co-owner Mary Rosenzweig prepares for the first day of dine-in service at the brewery’s tasting room on Wednesday, May 13, 2020. The table map on the counter shows where she can seat household parties while maintaining required social distance. (Loren Holmes / ADN)

Turnagain Brewing co-owner Mary Rosenzweig prepares for the first day of dine-in service at the brewery’s tasting room on Wednesday, May 13, 2020. The table map on the counter shows where she can seat household parties while maintaining required social distance. (Loren Holmes / ADN)

Gov. Mike Dunleavy on Monday said he believes Alaska is ready for the next phase of reopening the state’s economy from shutdowns related to the novel coronavirus.

Businesses closed March 18 under a statewide health mandate to limit the spread of COVID-19, the infectious disease caused by the virus.

Since, the state to date has moved through two of the five phases in the governor’s reopening plan, allowing limited capacity operations of personal-care services like salons, bars and restaurants, gyms and theaters. Religious and social gatherings can now include up to 50 people with social distancing guidelines. The state also began allowing elective medical procedures in early May.

Travelers arriving in Alaska are still required to quarantine for 14 days. The governor last week extended that mandate to June 2 but promised daily evaluations and changes that could be announced this week.

Dunleavy on Monday said Alaskans should be prepared for “a much larger opening” that leaves out just a few areas such as big gatherings and concerts. A state chart defines the next reopening phase as 75 percent capacity for most businesses and larger gatherings allowed including non-household members.

“Pretty soon, I think you’re going to recognize the Alaska that we once had,” the governor said.

The state has low COVID-19 numbers and enough health-care capacity to handle any surge in positive cases, Dunleavy said.

Thousands of Alaskans have filed for unemployment benefits and numerous businesses say the shutdowns put them under financially. Domestic violence shelters report higher levels of demand.

Dunleavy said he expected to make more specific announcements this week. The governor’s next briefing is tentatively scheduled for Wednesday, a spokesman said.

Alaska had 44 active COVID-19 cases as of Monday. Ten Alaskans have died with the virus, several after contracting it out of state.

The Alaska Department of Health and Social Services on Monday reported three new cases — two from Anchorage and one from Willow, the first for that Mat-Su community — and no new cases in visitors from out of state. One patient was between 10 and 19, one was in their 20s, and one was in their 30s.

Alaska’s chief medical officer Anne Zink said Monday that the state’s numbers are so low, it’s “a little hard to know at this point" why the hospitalizations rose.

Alaska’s rate of roughly six hospitalizations per 100,000 residents remains far below the national overall cumulative rate: 60.5 per 100,000, mostly in people 65 and older and then between 50 and 64, according to the Centers for Disease Control.