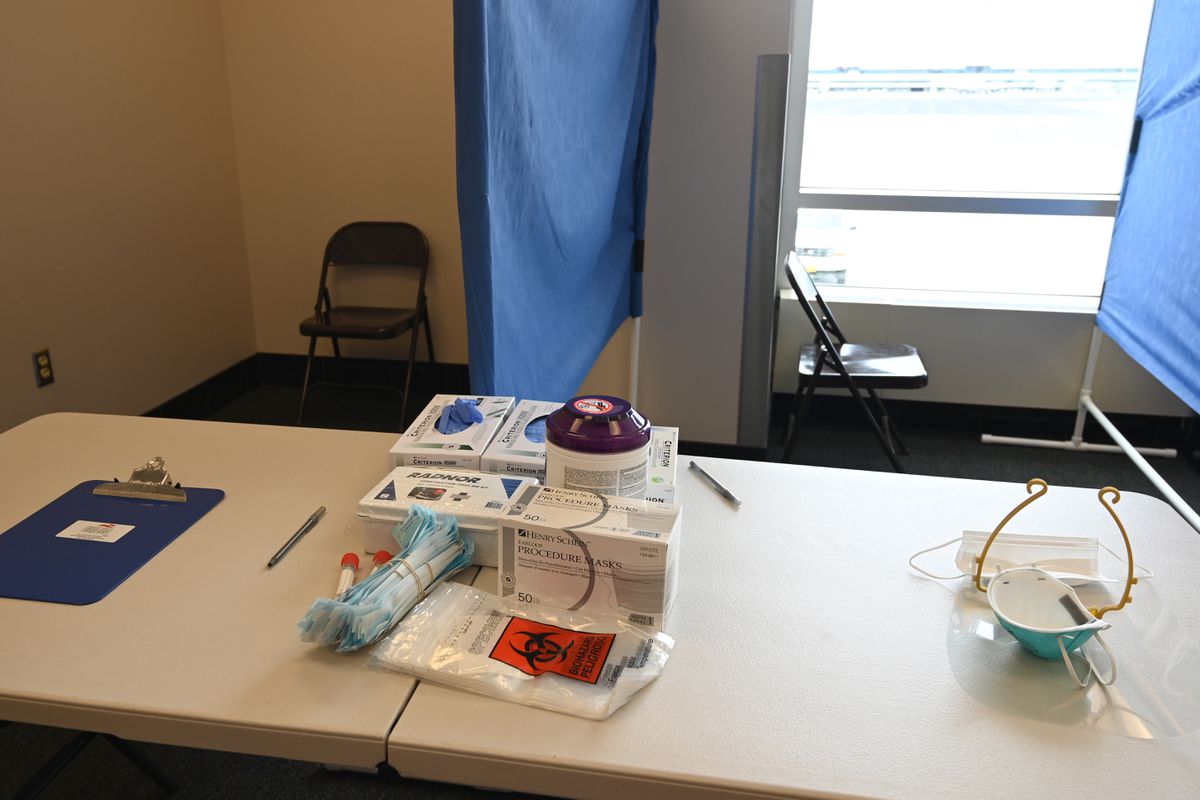 A testing site for COVID-19 is in the B concourse at the Ted Stevens International Airport. Photogaphed May 19, 2020. (Anne Raup / ADN)

A testing site for COVID-19 is in the B concourse at the Ted Stevens International Airport. Photogaphed May 19, 2020. (Anne Raup / ADN)

Some workers arriving in Alaska from Outside can be tested for COVID-19 at airports in Fairbanks and Anchorage, the state announced Tuesday.

The testing is for workers employed in fields that fall under the state’s definition of “critical infrastructure.” That list includes fishermen, firefighters and miners. It’s meant for workers who may not be able to get tested at their final destination, if it is remote and lacks the services necessary to get a test, Cutchins said.

At the Anchorage airport, they go through a small room to get swabbed after they land.

The swabs are then sent to the Alaska state public health labs.

[Gov. Dunleavy extends 14-day quarantine for travelers from outside Alaska to June 2, says it will be evaluated daily]

So far, the state has scheduled “some fishery people who are going to a small, remote community without any testing infrastructure there,” Cutchins said. Other workers may also include forestry workers and firefighters, he said. But the state isn’t requiring the workers to get tested at the airports.

“It’s not mandatory for the state, but it could be required by either the employer or the community that they’re going to,” Cutchins said.

Anyone who does get tested is asked to stay in Anchorage for two nights to allow time for the results to come back, Cutchins said. The employer is the one the who pays for and sets up the lodging in Anchorage.

“And then if the results come back negative, then they will deploy them to their final location,” Cutchins said.

The state is contracting with Capstone Clinic, which has a COVID-19 testing facility in Wasilla, to conduct the swabbing at Anchorage’s international airport.

Cargo pilots who land there are not among the workers who get tested, said Jim Szczesniak, the airport’s manager. Instead, they’re picked up through private transportation and are taken to a hotel for rest and food where they don’t interact with the general public.