Alaska coronavirus spike continues with 18 new cases, all in Southcentral 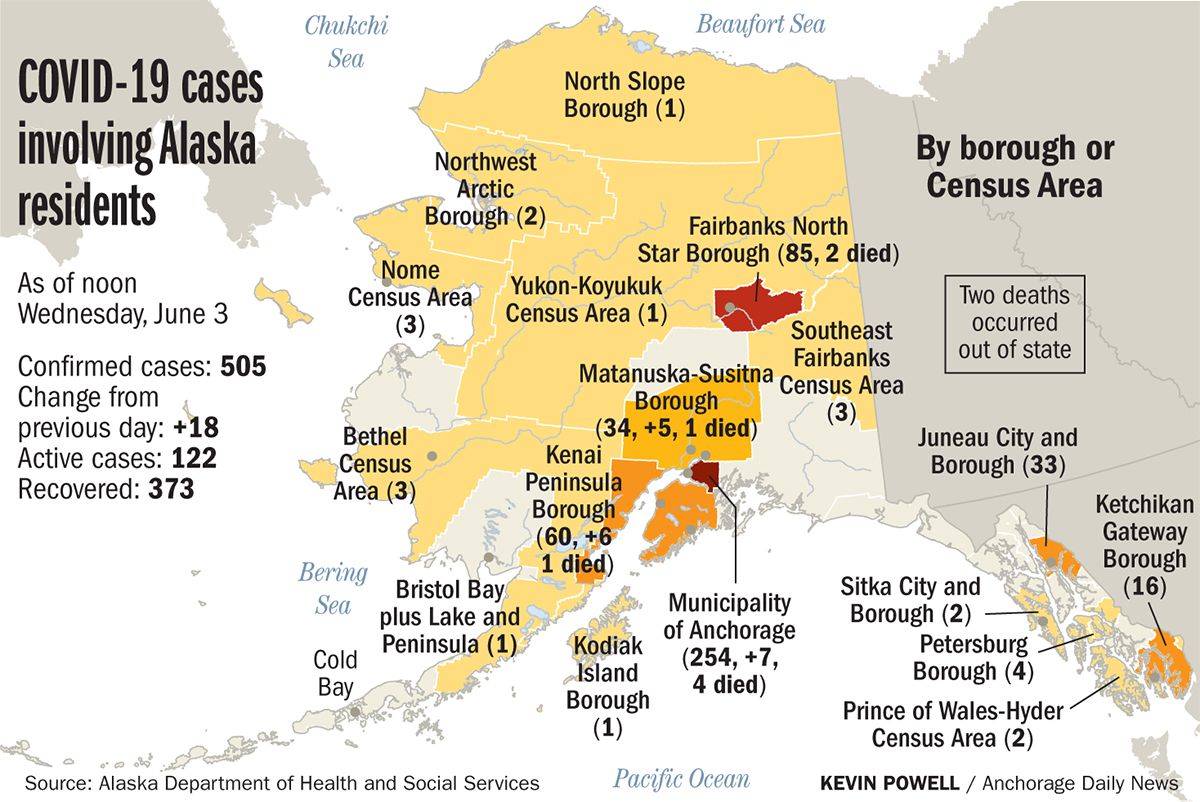 Alaska continued to see more cases of COVID-19 statewide on Wednesday, including 18 new cases concentrated in Southcentral communities, according to the state’s health department.

Five new cases were reported among Anchorage residents while two were reported in Eagle River. Additionally, there were three cases involving Wasilla residents, one in Palmer, one in Big Lake, four cases in Homer, one in Soldotna and one in a smaller unnamed community within the Kenai Peninsula Borough.

Since March, Alaska has reported 505 cases of COVID-19 among residents, including 122 active cases and 373 people who had recovered from the virus Wednesday. Ten Alaskans with COVID-19 have died.

Daily case counts remained in the single digits for much of May, even as more tests were administered, but daily numbers started to rise again last week. Several of the recently reported cases stem from an East Anchorage transitional care facility where 23 residents and caregivers had tested positive for COVID-19 as of Tuesday.

Additionally, the Kenai Peninsula has continued to see more cases recently, including three members of the Nikiski Fire Service Area, the Kenai Peninsula Borough Office of Emergency Management said in a statement Wednesday. Eleven people at the fire department are quarantining after possible exposure to the illness.

The members of the department in quarantine are all part of the same shift, so Central Emergency Services and the Kenai Fire Department will assist the Nikiski fire department, the Office of Emergency Management said, adding that public health officials “confirmed that no patient transports were exposed.” The cases are already reflected in the state’s reported numbers, local officials said.

A seafood industry worker who is not an Alaska resident also tested positive for COVID-19 in Anchorage, according to the state’s health department. The positive result was found through testing at the airport, the department said in a statement, and the worker is self-quarantining.

Late in the day on Wednesday, the Unalaska Unified Command also announced two cases of COVID-19 involving Icicle Seafoods workers. The asymptomatic workers were quarantining in Unalaska since arriving there from Seattle a week ago and had previously tested negative before traveling to Unalaska, the city said in a statement. The two workers are not Alaska residents.

After receiving the positive results, the workers went into isolation, and Icicle began their “cleaning and sanitation protocol,” Chris Pugmire of Icicle Seafoods said in the statement.

“While confirmation of the first positive cases of COVID-19 in our community is concerning, the parties involved did everything correctly," said Melanee Tiura, CEO of Iliuliuk Family & Health Services Clinic and health care consultant to Unalaska’s Unified Command.

The state of Alaska continued on a course of reopening throughout May as daily case counts stayed low. Alaska removed capacity restrictions on businesses statewide beginning May 22.

Additionally, wearing cloth masks can keep droplets — in the form of a cough or sneeze — from reaching others. The state is not currently mandating that people wear masks in public, Dunleavy said.

“We’re asking Alaskans to give some serious consideration to wearing masks, especially when you’re in a congregate area,” Dunleavy said.

The governor also briefly noted some of the tension between people who wear masks and those who do not. He asked that Alaskans respect one another on their choice to wear a cloth face covering, and respect business rules at establishments that require patrons to wear masks.

“We have a duty to each other to not impact each other with this virus if we can,” Dunleavy said.