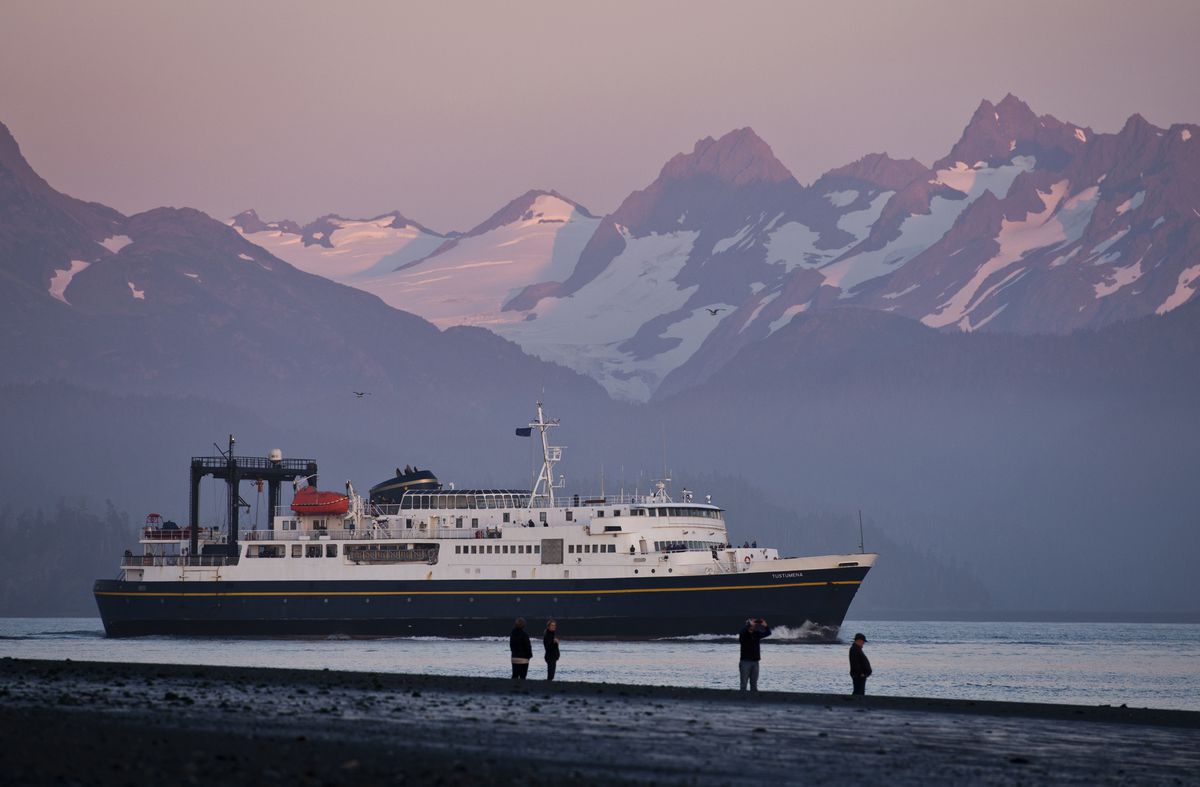 The state ferry M/V Tustumena is out of service with some crew and passengers in isolation after a crew member tested positive for COVID-19 early Saturday evening in Dutch Harbor.

The discovery of the virus was made after the vessel pulled into the Aleutian Island community on its first voyage of the season from Homer. The ferry let passengers off Saturday morning. Six of them stayed onboard for the return trip to Homer.

Now, public-health workers are tracing the infected crew member’s contacts to see who else may have been exposed, the state Department of Transportation and Public Facilities said.

The crew member is a female Alaska resident, officials say.

It wasn’t immediately clear if the other crew members identified as close contacts had contact with passengers.

The vessel left Homer on Tuesday and made stops at a string of communities on Kodiak Island and down the Alaska Peninsula before arriving in Dutch Harbor in the Aleutians on Saturday.

The Tustumena, part of the Alaska Marine Highway System, had a crew of 35, the department said, and as many as 60 passengers on board at any given time during the trip. There are 41 people aboard the ferry — 35 crew members plus six round-trip passengers — as it travels back to Homer.

No crew members reported COVID-19 symptoms as of Sunday afternoon, a transportation department spokeswoman said. Upon arrival to Homer, everyone will be screened and tested.

The crew member came in contact with the person in Homer and developed symptoms after the ferry left that community on Tuesday, Department of Transportation spokeswoman Meadow Bailey said.

The symptoms — runny nose, cough and body aches, but no fever — were “very mild” and didn’t concern the crew member until she learned she had contact with someone who tested positive, Bailey said. Other crewmembers were not aware their coworker was sick, she said.

The ferry arrived in Dutch Harbor, part of the city of Unalaska, at around 9:30 a.m., city officials say.

Early Saturday afternoon, the crew member got word that the person she had close contact with tested positive for COVID-19, Bailey said. The woman immediately notified the ship’s captain, who in turn notified Alaska Marine Highway System leadership, she said.

The Iliuliuk Family & Health Services clinic on the island was notified of a symptomatic crew member on the ferry, with a request for evaluation and testing, between 3:30 p.m. and 3:45 p.m., according to a city of Unalaska release. Clinic and EMS personnel immediately responded to the ferry.

The crew member was isolated on board and a rapid test was conducted at about 5 p.m., state officials say. It came back positive at 6 p.m. Medical personnel also screened the six passengers who stayed on board for the return trip to Homer. All crew members stayed on board when the ferry got to Dutch Harbor.

It wasn’t immediately clear what the employee’s job was on the ferry and where he or she had been before the trip began Tuesday.

Twenty-one passengers boarded in Dutch Harbor at about 4:15 p.m. Saturday and then disembarked at approximately 7 p.m., according to Bailey. They were told to self-monitor for COVID-19 symptoms.

The passengers who boarded the ferry in Dutch Harbor on Saturday afternoon expected to depart around 5:15 p.m. as scheduled, according to Lee Costanti, whose family was among them.

About an hour later, and an hour after the scheduled departure time, everyone was called into the lounge where the captain informed them of the situation and they got off.

Costanti wondered why the ferry let passengers board when they knew they had a possible COVID-19 case and were waiting for the crew member to get tested.

“Why wouldn’t they delay boarding?” he asked Sunday.

People in Unalaska are concerned about the number of people allowed to get off the ferry Saturday morning and the questions about contact with any infected people, Costanti said.

“The town here is obviously very upset,” he said.

Passengers were allowed to board because “these events were happening almost simultaneously,” Bailey said.

The crew immediately isolated the crew member and then notified the U.S. Coast Guard, Centers for Disease Control and state health officials before identifying a medical professional in Dutch Harbor who could provide testing, she said.

After leaving Homer on Tuesday, the Tustumena made stops in Seldovia, Kodiak, Chignik, Sand Point, King Cove, Cold Bay, False Pass and Akutan before reaching Dutch Harbor. Most of those communities have no reported COVID-19 cases among residents, according to state data. Along with the 20 cases in Homer, Kodiak has one and Dutch Harbor has several cases, all of them seafood industry workers.

On the trip back, the Tustumena will be operated by “essential crew” while the other crew members and six passengers self-quarantine, state transportation officials say. No additional stops will be made along the way.

Of the 16 crew requiring quarantine, nine were considered by the captain to be essential to sail the ship per its certificate requirements, according to Bailey.

The vessel is headed back to Homer because “Homer has access to the road system and thus more reliable access to hospital resources, if needed,” transportation spokeswoman Bailey said in an email Sunday. “Extreme care will be taken to make sure the crew and passengers are taken care of, and their interactions will be limited to medical professionals only as they disembark.”

State officials are aware of the number of positive cases already in Homer “and the concern of the Homer community and we are working to make sure interactions are limited and every precaution is taken to prevent further transmission of COVID-19,” Bailey said.

The Marine Highway System, which operates the ferries, has been working with health officials on protocols to prevent the spread of the virus, she said. That includes screening of passengers and crewmembers before boarding, encouraging passengers to wear masks, limiting the number of passengers to ensure that social distancing can be maintained and frequent sanitization.

Cases of COVID-19 surfaced in Alaska in March. State officials say the state has managed to keep infections here relatively low due to social distancing and travel restrictions.

After weeks of daily counts in the single digits, the state for the past week has recorded a number of daily spikes as Alaska’s economy reopened and additional testing revealed cases among fishing industry workers. But the number of people hospitalized has not spiked.

The state reported eight new cases and a total of 152 active COVID-19 cases as of Sunday out of a total of 544, with 48 total hospitalizations. Ten Alaskans have died with the virus.

The temporary loss of the Tustumena adds another burden to ferry passengers already dealing with unreliable service due to state budget cuts and an aging fleet.

In Unalaska, the loss of regularly scheduled direct flights to Anchorage and back compound the transportation problem. RavnAir Group provided service until declaring bankruptcy in April. The airline struggled to provide regular service for weeks last year after one of the planes it operated overshot the runway in October, killing a Washington state man.

Costanti, his fiancee and their two young sons were supposed to start a move to Wasilla with the ferry trip to Homer on Saturday. Instead, they ended up quarantined at their now-empty Dutch Harbor house with plans to fly out on a chartered flight Monday. The charter operator is aware of the situation, Costanti said. The family plans to quarantine in Wasilla.

A bus they’d packed with possessions was en route to Homer on Sunday on the ferry, which was fine with him. But nobody told the family the ferry was leaving even after they were asked to leave contact information with the crew.

“If they would have called us and let us, we would have gotten back on that ferry,” Costanti said.

The passengers from Dutch Harbor are not required to quarantine because they “have not been in contact with a known COVID positive person,” according to a statement Sunday from the City of Unalaska.

The city is advocating for the Alaska Marine Highway System to provide air transportation for the Unalaska passengers to get off the island, city clerk Marjie Veeder said Sunday.

The state is asking any passenger who was on the Tustumena this week to limit contact with others for 14 days and closely monitor their condition, including checking for a fever twice daily, wear a mask in public and get a test for the coronavirus if they have symptoms.