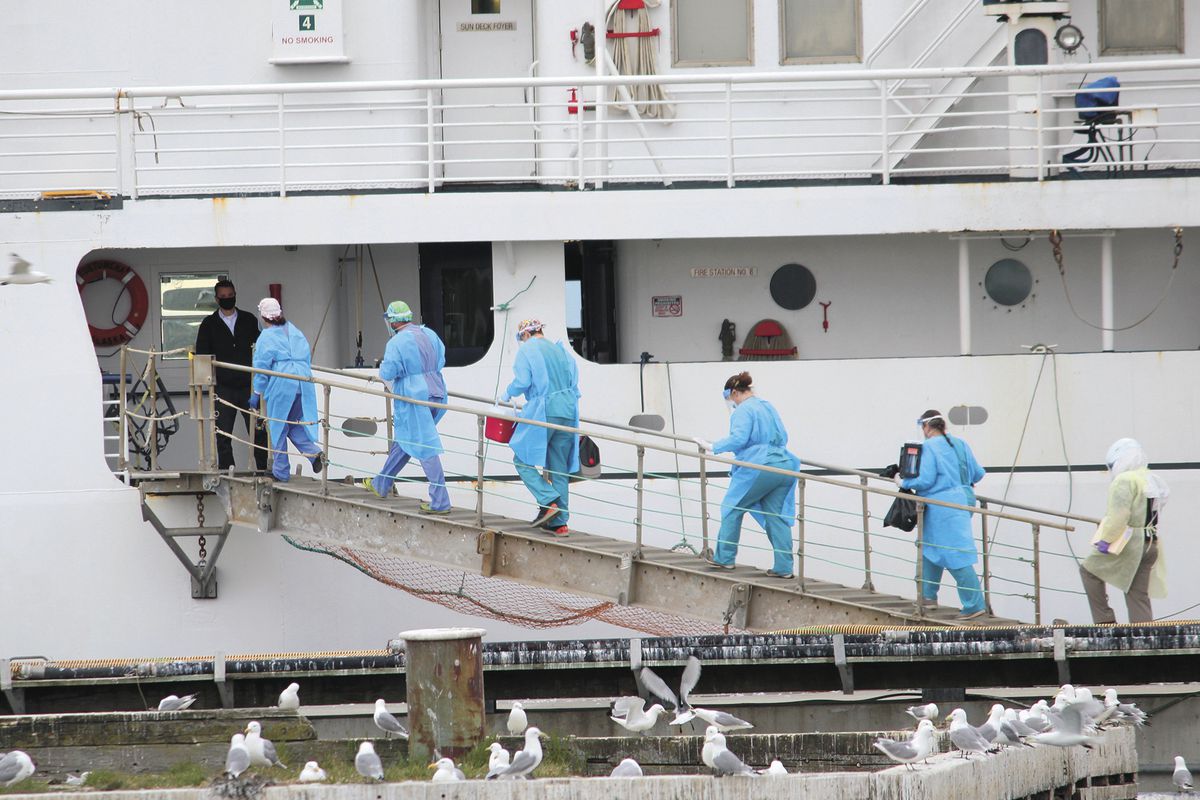 Staff from South Peninsula Hospital and Homer Public Health board the Tustumena to test 35 crew members and six passengers Monday, June 8, 2020, at the Homer Ferry Terminal in Homer. (Megan Pacer/Homer News via AP)

Staff from South Peninsula Hospital and Homer Public Health board the Tustumena to test 35 crew members and six passengers Monday, June 8, 2020, at the Homer Ferry Terminal in Homer. (Megan Pacer/Homer News via AP)

The state ferry M/V Tustumena is out of service indefinitely as Alaska Marine Highway System officials contend with a COVID-19 case on the vessel’s first trip of the season.

A crew member on the 296-foot Tustumena became the Alaska Marine Highway System’s first case of the virus Saturday when she tested positive in Dutch Harbor.

The ferry docked back in Homer — where the summer’s first trip began on Tuesday — at 8 p.m. Monday.

Community members in the small city of about 6,000 on Kachemak Bay with about 20 COVID-19 cases are worried about additional spread from people leaving the ferry.

“I know there was concern about people coming off the boat initially when the ship arrives,” said Capt. John Falvey, general manager of the Alaska Marine Highway System. “I’ve given the captain orders: no one comes ashore until I say so.”

The six passengers who made the round-trip from Homer to Dutch Harbor as “tourists” and 35 crew members will get tested Monday night before they’re allowed to get off the vessel under strict parameters, officials said during a Monday afternoon briefing. All the crew and passengers are Alaska residents.

South Peninsula Hospital in Homer is willing to “run through the night to help support this ferry coming in,” Alaska chief medical officer Dr. Anne Zink said, adding that as long as there is a global pandemic, Alaska will continue to see COVID-19 cases.

“Mitigation can prevent a couple cases from turning into a whole bunch of cases,” Zink said.

Hospital staff will come aboard and swab all crew and passengers, officials say.

Once all the swabs are collected and quarantine information obtained, state public health officials will allow crew to leave the ferry while the results are pending, according to Dr. Joe McLaughlin, the state epidemiologist. But that’s only if they’re going to a final destination or home where they can quarantine for 14 days, McLaughlin said. They also can go only if they have private transportation that won’t expose other people.

Otherwise, they’ll have to stay on the boat.

The six passengers are being asked to stay in 14-day quarantine in Homer unless otherwise directed by public health officials because more cases are possible, he said. “Then it may be very difficult for us to determine who is and who is not a close contact and so it’s possible that many or all of the passengers and crew will need to be in a full 14-day quarantine.”

It’s not clear when the ferry will be able to start making the run between Homer, Kodiak and the Aleutian Islands again.

The Alaska Department of Transportation and Public Facilities said Monday morning the plan was to resume service Saturday with a sanitized vessel and a new crew. But that plan hinged on getting the crew off the ferry.

Falvey said most crew live in Anchorage or on the Kenai Peninsula and take public transportation such as a chartered bus.

Given the quarantine and travel protocols for getting crew off the ferry, he wondered if he might have to keep most of the crew on the ferry for two weeks, which would delay the resumption of service.

McLaughlin said he expected the state health and ferry officials could work together on a way to get crew off the boat in the next few days.

No additional information was made available about the infected crew member. She contracted the virus from a fellow ferry worker from Homer who hadn’t been on a boat in some time due to COVID-related slowdowns, according to Falvey. Her only other close contacts are 16 crew members on the ferry.

The other crew are staying in their rooms as much as possible, officials say. No other crew or passengers were displaying COVID-19 symptoms as of Monday.

Additional positive cases could change the existing guidance — limit contact with others for 14 days and monitor for symptoms — for people who rode the ferry, Zink said.

The Tustumena headed back from Dutch Harbor to Homer Saturday after the crew member’s test came back positive.

The vessel docked in Unalaska on Saturday morning; around noon, the crew member learned someone she’d come in contact with in Homer had tested positive. By then, she had mild symptoms of a runny nose and a cough. The ferry captain notified state and federal authorities. Falvey said Monday he worked directly with Zink and state epidemiologist Joe McLaughlin on the response. Ferry staff allowed passengers to board in Dutch Harbor, then had them get off a few hours later after the positive test came back.

Transportation officials say they discussed keeping the vessel docked in Dutch Harbor, but there were concerns due to limited accommodations and transportation options, and distance from medical support if needed.

The ferry can carry 190 people but was limited to 60 to follow social distancing protocols.