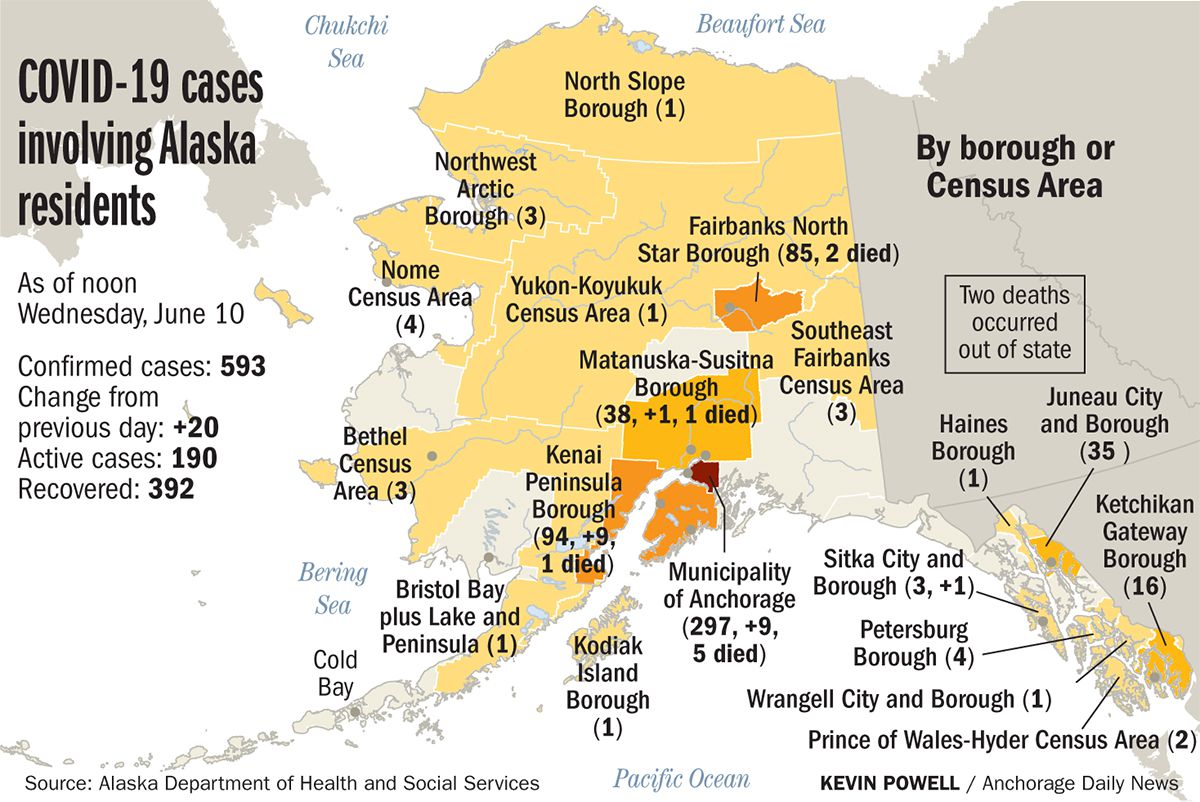 The number of Alaskans with active cases of COVID-19 on Wednesday rose to its highest level since the start of the pandemic, new state data shows.

Alaska’s active coronavirus case tally — the number of residents who have tested positive but not yet recovered — rose to 190, according to the state’s COVID-19 dashboard. It marks the highest level since the novel coronavirus was first confirmed here in March, said Dr. Anne Zink, Alaska’s chief medical officer, in a media briefing Wednesday. The next highest number of active Alaskan cases was 188 back in early April.

The number of people currently hospitalized in Alaska who are either confirmed to have COVID-19 or are under investigation nearly doubled this week, the data shows.

There were 12 people in that category on the Alaska Department of Health and Social Services database as of Tuesday. On Wednesday, that number jumped to 22.

Zink said Wednesday that the increase was attributable to a backlog in data that hadn’t previously been reported by some health care facilities. Of those 22 current hospitalizations, three involve people confirmed to have the coronavirus while 19 involve people suspected of having COVID-19, Zink said.

Since the start of the pandemic, a total of 49 people confirmed to have the virus have required hospitalization.

The number of confirmed COVID-19 cases in Alaska increased by 20 on Tuesday, as reported by the state Wednesday. The daily spike marks the latest double-digit increase since late May, after more than a month of low daily case counts.

State officials including Zink and Gov. Mike Dunleavy have said they expected the state’s daily case counts to rise as Alaska reopened much of its economy. They also said, however, that the best-case scenario didn’t involve a parallel increase in people sick enough to require hospitalization.

Nine of the new cases reported Wednesday involve Anchorage residents, according to the state health department. It wasn’t clear how many, if any, were associated with a large outbreak at the Providence Transitional Care Center in East Anchorage.

One Providence Transitional Care Center resident with COVID-19 died Sunday, becoming the state’s 11th death associated with the virus. Another 44 residents and caregivers tested positive as of Wednesday at the center, including one at a Providence extended-care center. More tests are pending.

Five new cases were reported in Homer. That’s where the first ferry in the Alaska Marine Highway System to report confirmed cases of the virus on board docked Monday night.

The state ferry M/V Tustumena arrived in Homer with one positive case of COVID-19 in a crew member diagnosed Saturday. Six passengers on board tested negative Monday night in Homer, as did 28 other crew members. But another six crew members tested positive, officials said.

“We hope something like this doesn’t happen again," John MacKinnon, commissioner of the state Department of Transportation and Public Facilities, said in Wednesday’s briefing.

Six of the Alaska cases reported Wednesday are Tustumena employees, state health officials say. Three crew members who tested positive remain in isolation on board the Tustumena and four infected crew members left the vessel to isolate at other locations using private transportation.

The four who left received guidance from state health officials on how to isolate to ensure the safety of others, state officials say.

The Tustumena saw approximately 150 passengers in total last week, according to Department of Transportation spokeswoman Meadow Bailey. The employee who tested positive didn’t interact with passengers, Bailey said, and all 16 people determined to be close contacts of the crew member were employees.

Another four residents in different Kenai Peninsula communities — including Nikiski, Soldotna, Seward and another smaller community — tested positive, according to state data. One person each in Wasilla and Sitka also tested positive.

Someone who flew from Anchorage to Bethel tested positive for the virus in Anchorage before traveling, according to the Yukon-Kuskokwim Health Corp. That person wore a mask on the flight and agreed to voluntary testing again at the airport in Bethel upon arrival, YKHC officials say.

Health officials working with state epidemiologists had identified all of the person’s close contacts by Wednesday afternoon and told them to self-isolate for 14 days.

Testing at the airport in Bethel is voluntary, and only a quarter to 60% of arriving passengers opt to get tested, YKHC officials say.

A Northwest Alaska health care provider also announced that a person in Kotzebue was in quarantine there after testing positive for COVID-19 and arriving from Anchorage on Tuesday. The person was originally headed to a village in the region but stayed in Kotzebue, said Kelli Shroyer, spokesperson at the Maniilaq Association, on Wednesday.

Two others who were traveling with the person tested negative for the illness in Kotzebue and continued to the village, which Maniilaq did not name. The two “will be self-quarantined and monitored regularly,” according to a statement from Maniilaq.

As of Wednesday, Alaska has reported 593 total cases among residents since March. Two more non-Alaskans tested positive in the state, bringing the overall total to 51.

The other non-Alaskan to test positive was in the Kenai Peninsula Borough.

A total of 67,720 tests had been conducted as of Wednesday in the state.