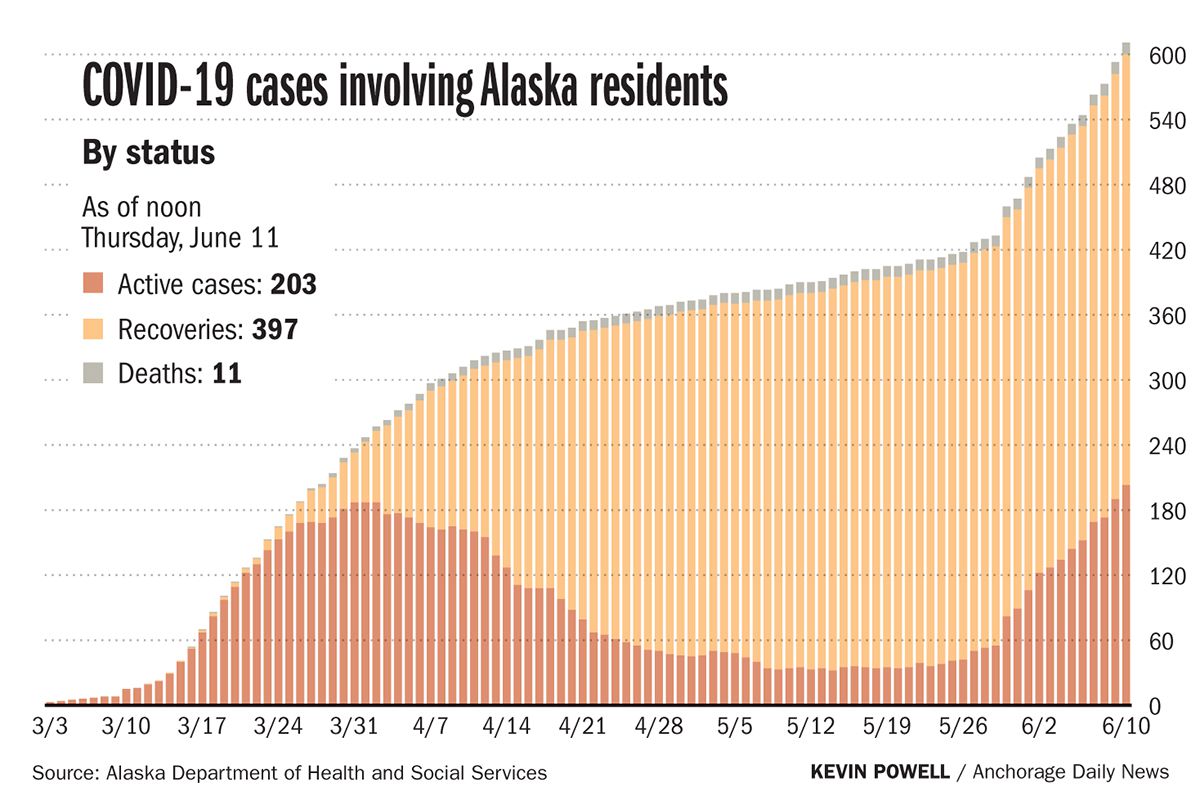 Alaska on Thursday hit a new high in reported daily active COVID-19 cases since the pandemic began in March.

The state’s active case tally, the number of residents who have tested positive but not yet recovered, rose to 203 as of Thursday, according to the state’s COVID-19 dashboard.

It was 190 on Wednesday — a new high after last getting as high as 188 in early April when infections first spiked here — though state data on Thursday show Wednesday’s number was later revised to 186. It was not immediately clear why that change occurred.

Gov. Mike Dunleavy fully reopened the state’s economy and lifted most coronavirus restrictions on May 22 after weeks of low daily case counts.

Now the state is experiencing infection clusters on the Kenai Peninsula, and in Mat-Su and Anchorage, the state’s chief medical officer said this week. There are also outbreaks in at least one care facility — the Providence Transitional Care Center in East Anchorage — and aboard one of the state’s ferries, the Tustumena.

The 49-bed Providence care center with a large outbreak was reporting 46 positive cases in 18 residents and 27 caregivers as of Thursday, as well as one caregiver from adjacent Providence Extended Care.

One resident with COVID-19 died Sunday, and another with the virus was critically ill, Providence officials said Wednesday afternoon.

The ferry outbreak occurred almost as soon as the Tustumena left the dock in Homer on its first trip of the season. One crew member became infected before that trip after being in close contact with someone from Homer who later tested positive for the virus. The only other close contacts the female crew member had was with other co-workers on the vessel, state officials say.

The ferry on Monday night returned to Homer, where another six crew members tested positive.

Statewide, the Alaska Department of Health and Social Services reported 17 new COVID-19 cases among residents through Wednesday night, continuing a trend of double-digit daily case count increases that started in late May. In total, 611 Alaskans have tested positive for the virus.

The new cases involve four residents of Anchorage, one in Kodiak, two in Homer, one in Soldotna, one in Palmer, one in a smaller community within the Northwest Arctic Borough, two in Juneau and two in Sitka. Another case in Fairbanks and two in North Pole represented the first confirmed positive tests in that region in weeks.

An employee at the Fairbanks Pioneer Home is among Alaska’s new COVID-19 cases, the state announced in a statement Thursday.

“The risk to residents at the home is considered very low based on their exposure to the employee,” according to the state’s health department.

The employee is in isolation and isn’t working at the home, which has capacity for 91 people. Another employee is in quarantine after “limited exposure” to the employee who tested positive. The home’s residents and employees will all be tested for the illness, the statement said.

The number of people currently hospitalized with positive or pending COVID-19 test results declined from 22 to 18 between Wednesday and Thursday, according to state data.

Seven more nonresidents — five of whom are seafood industry workers — have tested positive in Alaska, bringing that total to 58 since the pandemic began.

Additionally, one new case in Bethel that wasn’t included in the state data was reported Thursday by the Yukon-Kuskokwim Health Corp. The state reports cases confirmed the prior day.

The Bethel case was someone identified through screening and testing of people getting off flights at the Bethel Airport, the health corporation said. The person is self-isolating and YKHC officials are working with state epidemiologists on contact tracing and follow-up testing.

The health corporation is “highly confident this is a travel-related case” but is offering drive-thru testing without an appointment to residents concerned about possible exposure.