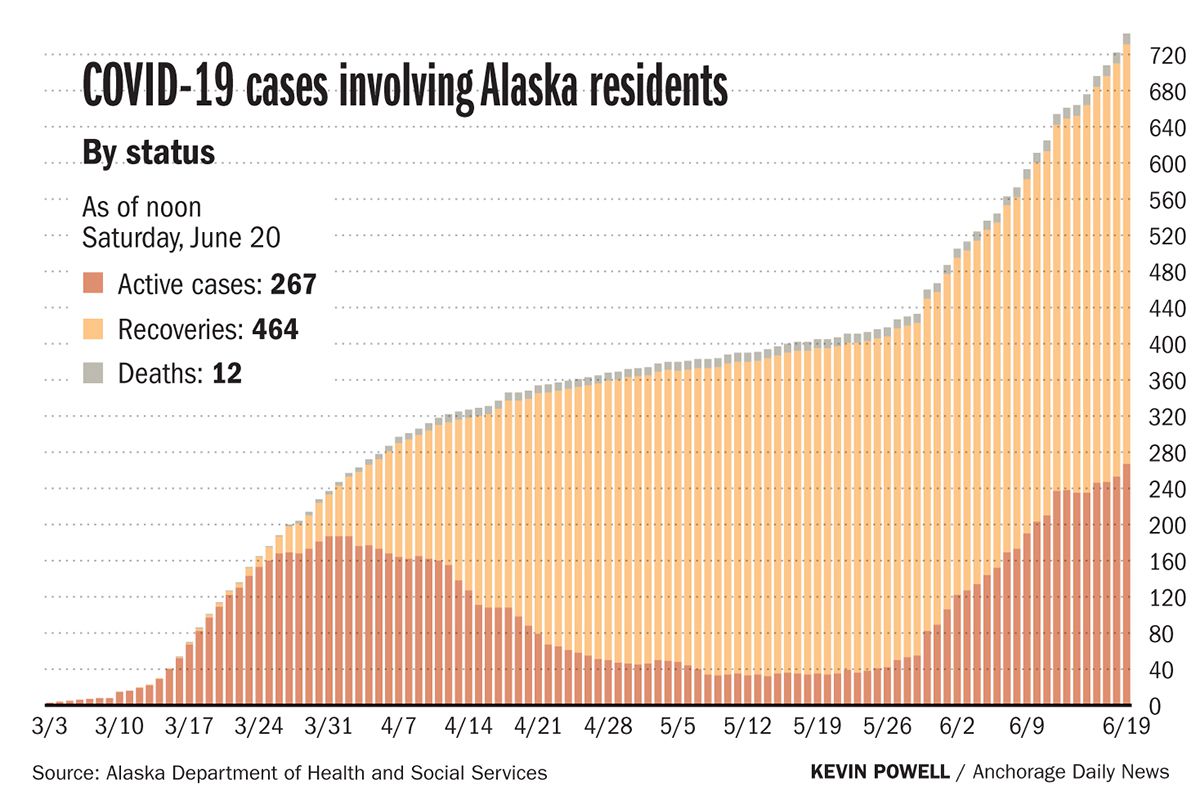 The number of active COVID-19 cases reported Saturday among Alaskans reached the highest level yet as the state contends with its second wave of rising coronavirus cases since the pandemic began.

State health department data released Saturday showed 267 active resident cases. That number, which peaked at 188 during Alaska’s first wave of active infections, has been growing steadily this month after the state in May lifted most pandemic restrictions on businesses and social gatherings. The loosening of restrictions came after weeks of low daily case counts and efforts to expand the state’s health care capacity.

Testing confirmed 21 new virus cases among Alaska residents and two cases among nonresidents, Saturday’s state data showed. The new cases involve seven Anchorage residents, four people from Fairbanks, three from North Pole, two from Sitka and one case each among residents of Homer, the Yukon-Koyukuk Census Area, Big Lake and one person from a smaller community in the southern Kenai Peninsula.

Among nonresidents, a mining worker in the Fairbanks North Star Borough and a seafood industry worker in the Wrangell-Petersburg Census Area newly tested positive.

Another person from out of state tested positive for COVID-19 on Thursday and was also added to state data on Saturday.

A total of 104 people from Outside have tested positive for the virus in Alaska, according to the state, along with 743 total cases among residents since the pandemic began.

There was also one new hospitalization involving someone confirmed to have the virus, according to state data.

On Friday, the Municipality of Anchorage announced that five cases of the illness were tied to an early June gathering in Girdwood, while other attendees were showing symptoms but had declined testing. Another 42 people were being monitored in association with gatherings in Girdwood.

Additionally, three health care workers in Fairbanks had tested positive for COVID-19 by Friday. Health officials recommended that 14 patients who had contact with an employee at the Tanana Valley Clinic quarantine for two weeks, though they’re considered “low risk.”