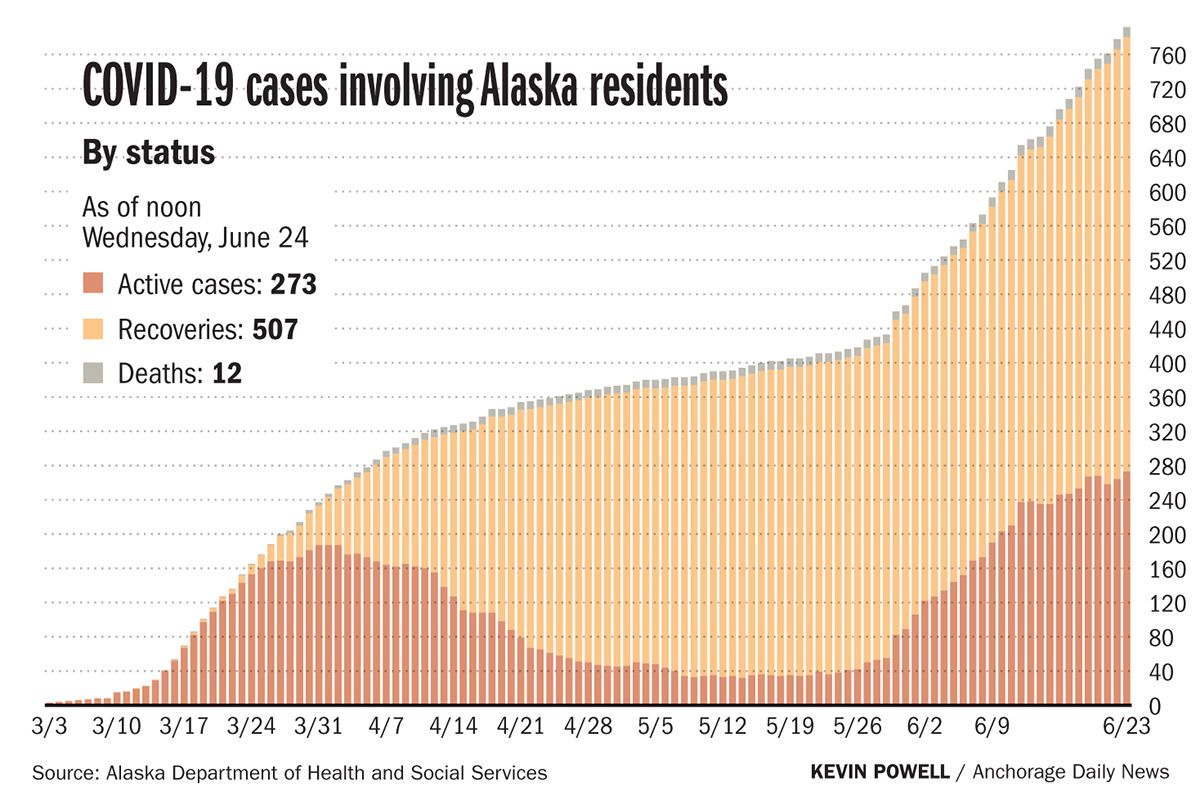 Alaska on Wednesday logged another new high for active COVID-19 cases as state health officials emphasized the importance of wearing face coverings in public and envisioned what a coronavirus vaccine rollout might look like.

In Southwest Alaska, a case involving someone who traveled to a village prompted a regional health organization to recommend shelter-in-place measures and mandatory mask wearing in that community.

As of Wednesday, the state reported 273 residents with active coronavirus cases, meaning they tested positive but haven’t recovered. Another 507 Alaskans have recovered from the virus, including five new recoveries reported Wednesday, state officials say.

The state reported a total of 21 new cases Wednesday: 14 among residents and another seven involving nonresidents, according to the Alaska Department of Health and Social Services COVID-19 dashboard.

It wasn’t clear how many of the people with positive test results were experiencing symptoms. The state on Wednesday reported one new resident sick enough to be hospitalized, bringing the total number to 64 since March.

Twelve Alaskans have died with the virus, including two residents at the site of the state’s largest outbreak, Providence Transitional Care Center in East Anchorage.

One more transitional center caregiver tested positive over the weekend after another round of testing, according to Providence spokesman Mikal Canfield. That brings the total cases associated with the center to 48: 28 caregivers and 19 residents — two of whom are hospitalized — as well as one caregiver at Providence Extended Care.

The Yukon-Kuskokwim Health Corp. recommended that a Y-K Delta village mandate wearing masks in public and institute a shelter-in-place order through July 5 after a Bethel resident who tested positive for the illness Wednesday traveled there while possibly infectious. The name of the village is being withheld as a means of privacy protection, according to a statement from YKHC.

“Although the State of Alaska has eased restrictions on travel and moved to reopen Alaska’s economy, the pandemic and the public health risks it poses is not over,” YKHC said.

The state reports new cases daily based on test results that are returned the previous day, meaning that the Bethel resident’s case should be reflected in Thursday’s numbers.

The new cases reported by the state Wednesday bring Alaska’s total cases to 928, including 792 residents and 136 nonresidents since the pandemic began in March.

The new resident cases announced by the state include seven in Anchorage, two in Fairbanks, and one each in Chugiak, North Pole, Palmer, a Mat-Su community, and a community in the Ketchikan Gateway Borough.

According to state health officials, the new nonresident cases include four in the Fairbanks North Star Borough -- two in the mining industry, one in an “other” industry and one visitor; one in Anchorage classified as “unknown at this time”; one in an “other” industry in Kodiak Island Borough; and one in the seafood industry in the combined Bristol Bay and Lake & Peninsula boroughs.

Of the new Alaska resident cases reported Wednesday, six are male and eight are female, according to health officials. Two are under the age of 10; four are 10 to 19; two are in their 20s; three are in their 30s; one is in their 50s; and two are in their 60s.

[Virus cases surge among younger Americans, endangering them and older adults they come into contact with]

A total of 96,096 tests have been conducted, officials say. The average percentage of daily positive tests for the previous three days is 0.71%.

On face coverings and a potential vaccine

The state’s chief medical officer, Dr. Anne Zink, said the recent increase in cases is somewhat different from the state’s first wave of cases because testing is more widespread and there is more contact tracing.

She said the broad mandates that were in place at the beginning of the pandemic “have limited effect for a limited period of time,” and the state is instead using a “strategic and geographically responsive approach” going forward.

Zink did not directly answer a question regarding whether she would advise a temporary mask mandate be implemented in certain circumstances, but she said that the face coverings are an important tool in preventing the spread of the virus. Evidence shows they can help control the spread of droplets to others and also that a well-fitting mask or tightly woven face covering has some protection for the individual as well, she said.

“My goal is to have as many people wearing masks when they can’t socially distance as possible, and whatever tools we can use to get there,” Zink said. “There’s a lot of debate on which tools are most effective for all sorts of different reasons, but we continue to try to just message consistently that a mask is an important tool moving forward.”

About one-third of Alaskans have one or more risk factors associated with COVID-19, Zink said.

“We often get asked, why don’t we just kind of protect a small group,” Zink said. “It’s not a small group — it’s at least a third of us.”

And, Zink said, some data from the Lower 48 indicated that a high percentage of people who don’t have those risk factors have been hospitalized.

State epidemiologist Dr. Joe McLaughlin talked about what the future of a COVID-19 vaccine may look like, calling it the “biggest game changer in our battle against COVID-19.”

Ideally, multiple types of vaccines would be available for distribution, and the U.S. is focusing on three vaccine candidates, McLaughlin said. If the vaccine is proven to work, McLaughlin said he’d heard from the federal Centers for Disease Control and Prevention that it would be rolled out in two phases.

An early vaccine would be distributed to “priority groups” based on CDC guidance, a phase that could begin as soon as this coming fall. Supply will be limited at first, he said, and vaccines would be administered in clinics at places like schools and workplaces.

The second phase would vaccinate the general population, which McLaughlin said could potentially begin in the early part of 2021, when vaccines might be widely available and administered in doctors’ offices and pharmacies.

“This is all, of course, dependent on the clinical trials, and how well these vaccines do, and how quickly the manufacturers can actually develop the vaccine,” McLaughlin said.