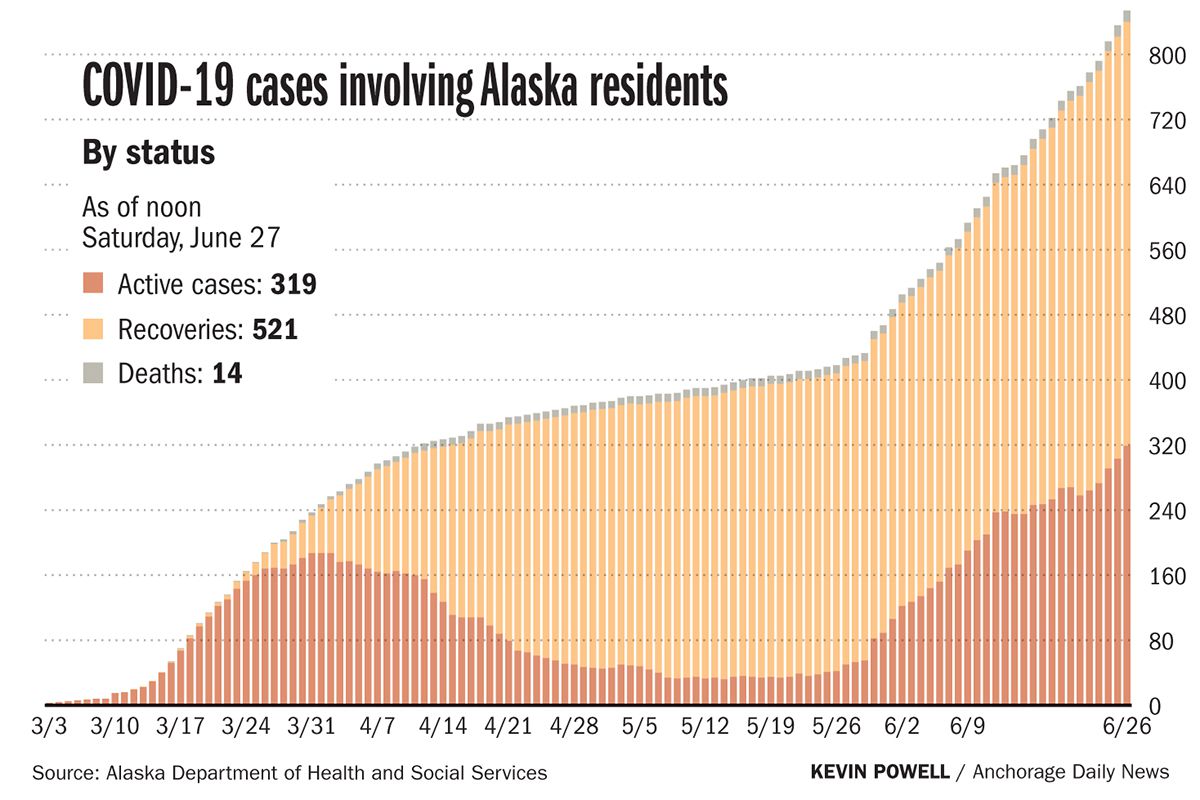 Alaska continued to report more cases of the coronavirus Saturday, including 19 new cases involving residents and eight among non-Alaskans.

By Saturday, there were 319 active cases of COVID-19 among residents, the highest number of cases reported at any single point during the pandemic, state data showed.

Anchorage saw 10 new cases among residents and two involving people from outside the state. In response to climbing cases in the municipality, Mayor Ethan Berkowitz on Friday instituted an emergency order requiring the wearing of masks in public indoor spaces starting Monday.

Another case of COVID-19 was announced in a Seward resident on Saturday. The city is advising anyone who was at two local businesses at the beginning of the week get tested for the illness after two connected cases were discovered in the city Thursday. It wasn’t immediately clear whether the new resident case Saturday was tied to the others.

New resident cases announced Saturday also involved two people from Wasilla and one person each from Kenai, Fairbanks, Willow, Juneau, Bethel and a smaller community in the Yukon-Koyukuk Census Area.

In total, 854 Alaska residents have tested positive for the illness, and of those, 521 are considered recovered. A single case of COVID-19 from Eagle River was counted on both Wednesday and Thursday, according to a statement Saturday from the state’s health department.

Four of the 14 Alaskans who have died with COVID-19 were out of state at the time, including two Juneau residents whose deaths in early May at long-term care facilities — one in Washington and one in New Jersey — were announced on Friday.

The man and woman who died were not connected to each other and were in different states, health officials said Friday. One of the two was in their 60s while the other was in their 70s. Both tested positive for COVID-19 more than a week prior to death, Juneau officials say, and they are the first Juneau residents to die with the virus.

It wasn’t immediately clear why the reporting process led to the state hearing now about deaths that occurred more than a month ago, state health department spokesman Clinton Bennett said. Cases of the illness are tracked and counted based on a person’s residency, which helps avoid double-counting nationally.

Among the new nonresident cases announced Saturday are two seafood industry workers in the Dillingham Census Area who tested positive for the illness Friday. They were close contacts of 12 workers at the OBI Seafoods Wood River plant in Dillingham who tested positive for COVID-19 on Monday, according to a statement from the City of Dillingham. The city said the two seafood workers were asymptomatic when tested and were moved into isolation.

A 15th asymptomatic employee at the plant tested positive for the illness on Saturday and was also isolated, according to a statement from OBI.

“The employees were in a non-working quarantine and received additional testing as they were identified as close contacts of previous positive cases,” the company said Saturday night.

Seafood industry workers made up the bulk of cases among nonresidents in the state, with 115 total cases tied to the industry reported by Saturday.

State data also showed two people in the mining industry, one in Juneau and another in the Fairbanks North Star Borough, and a tourism worker in the Valdez-Cordova Census Area were among the new nonresident cases.

A total of 175 people from outside of Alaska have tested positive for COVID-19 in the state.