COVID-19 cases double in Seward as state of Alaska reports 33 new cases, some with ties to bars 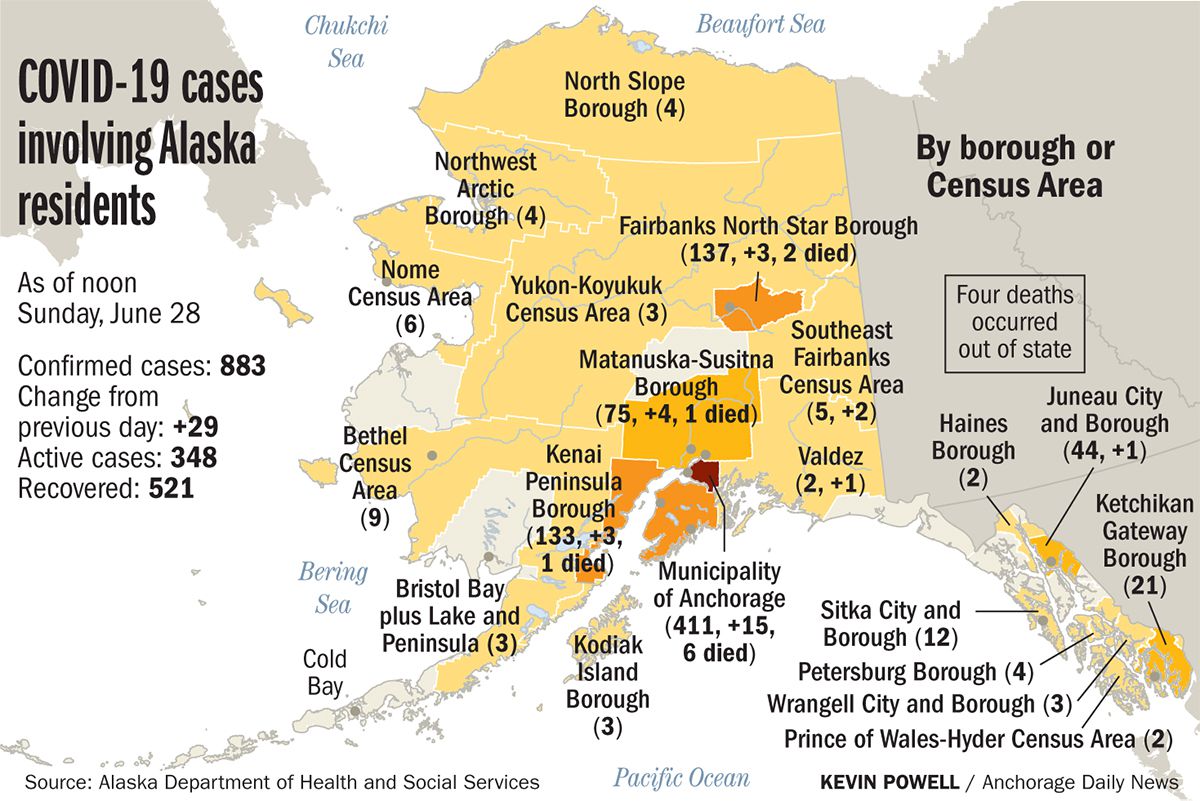 The number of COVID-19 cases doubled in Seward on Sunday as 33 cases were confirmed throughout Alaska by the Department of Health and Human Services. The cases were found in 29 Alaskans and four nonresidents.

Alaska’s Chief Medical Officer, Dr. Anne Zink, wrote in a report Sunday that “many of the recent new cases are in youth or younger adults,” mirroring a trend found across other states. Some of the cases are linked to bars in several communities, she said.

“Going to a bar right now, especially to listen to a concert, should be viewed as a high risk activity,” Zink said in the statement. “The virus can spread easily in crowded indoor spaces, especially when people are close together and singing or talking. Please take precautions and if you do go, consider not interacting with anyone who is at high risk for serious illness such as older Alaskans or those with underlying health conditions.”

Ten of the cases announced Sunday were in people between ages 20 to 29 and another nine were in those aged 30 to 39, according to an online statement from DHSS.

[Younger adults are large percentage of US coronavirus hospitalizations, according to new CDC data]

The city of Seward, a community of about 2,500 residents on the Kenai Peninsula, said in an online alert that about 300 tests were completed over the weekend and results are expected to process early in the week. The increase in positive cases comes a day after city officials advised that staff members from two local businesses had tested positive for COVID-19.

The city advised anyone who had visited the Seward Alehouse and Yukon Bar early last week that they should be tested for the virus. A Seward Alehouse employee tested positive for COVID-19 and the restaurant posted on Facebook Friday that it would be closed while the location underwent cleaning and monitored employee health.

As you may be already aware, one of our staff members has unfortunately tested positive for COVID-19. They are...

The Yukon Bar closed its doors Thursday pending testing results of the full staff, it announced on Facebook. The business could not be reached by phone Sunday evening and had not updated the social media announcement.

The jump in Seward’s COVID-19 cases comes just a week before the town’s annual Fourth of July celebration. Event planners modified the event and are encouraging social distancing, according to their website. The Mount Marathon Race, which in normal years brings about 1,000 racers and several thousand spectators to the small town during Fourth of July weekend, was canceled due to concerns about spreading the virus.

Cases have been on the rise in Alaska throughout the last month, following business reopenings and a lifting of restrictions. On Sunday, there were 348 active cases of COVID-19 in the state. Fourteen Alaskans have died of the virus, 67 people have been hospitalized and 521 people in the state recovered as of Sunday. More than 108,000 tests had been completed by Sunday; 883 Alaska residents have tested positive for the virus.

The new cases announced Sunday include: 15 people in Anchorage, two each in Fairbanks, Seward, Wasilla and Delta Junction, and one case each in Big Lake, Juneau, North Pole, Soldotna, Valdez and Willow.