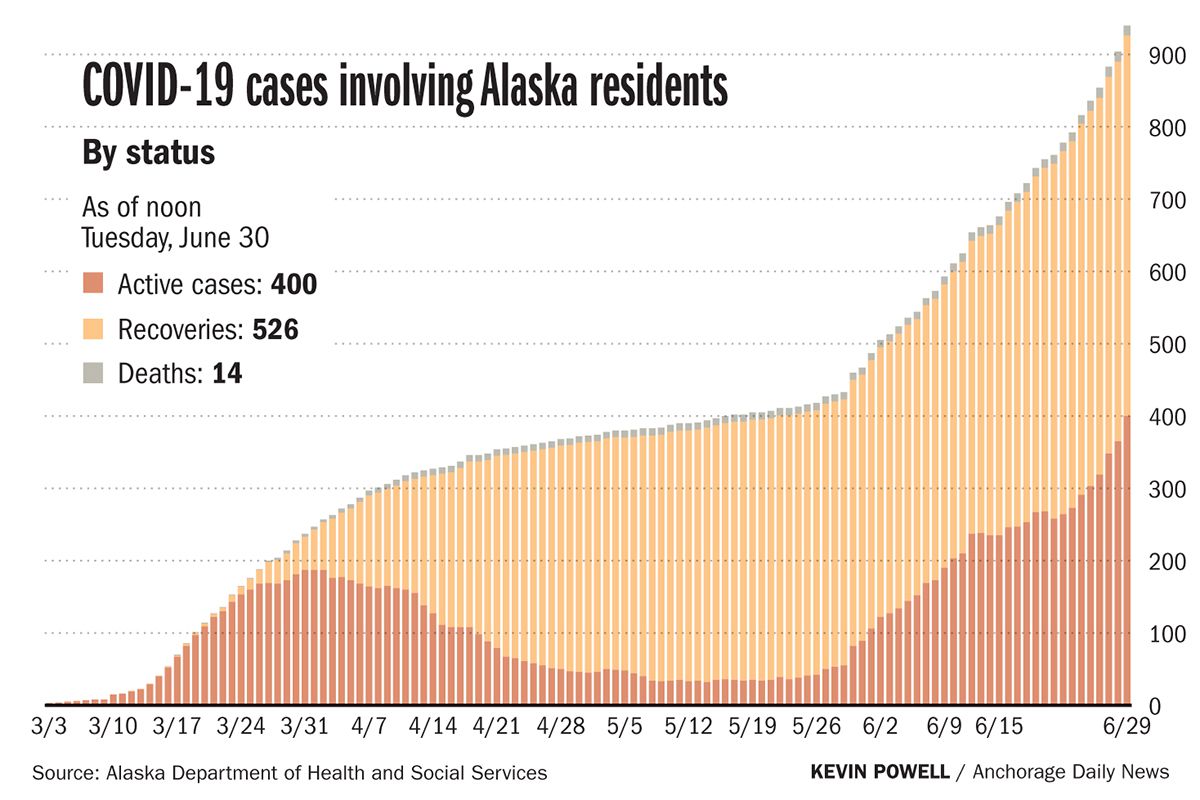 Alaska recorded its highest daily increase in COVID-19 cases yet since the pandemic began, with 36 new cases among residents and 12 cases among nonresidents, according to state data Tuesday.

There were no new deaths or confirmed COVID-19 hospitalizations reported by the state. The number of active cases of the virus rose to 544 total: 400 Alaska residents and 144 visitors, according to state data.

Alaska is seeing a surge in active cases after a period in May with few or no new cases reported each day. Low case numbers in May, along with efforts to bolster health care capacity and Alaska’s supply of personal protective equipment, prompted the state to gradually remove most of its pandemic-related restrictions by the beginning of June.

Most of the new cases on Tuesday were concentrated in Southcentral Alaska, with 21 new cases among Anchorage residents and one in a nonresident here. There was also one case involving an Eagle River resident and two involving Palmer residents, according to the state’s COVID-19 data.

[As Fourth of July looms, governor urges Alaskans to mask up and keep their distance]

In Seward, state data showed four new cases of COVID-19 among residents and three cases involving nonresidents. The City of Seward announced six of those new cases Monday, and as the community works to contain the outbreak, officials canceled the city’s annual Fourth of July celebration.

Health officials in Seward had urged anyone who was at the Yukon Bar or Seward Alehouse during a specific time period last week get tested for the virus.

The rest of the cases reported Tuesday are spread across the state, including one involving a Juneau resident, one involving someone from a smaller community in the Valdez-Cordova Census Area, someone from Soldotna who tested positive and five cases among Fairbanks residents, state data showed.

The Tuesday data reflects new cases reported to the state throughout Monday.

There was one new case reported in Seward and another 321 tests administered and awaiting results, local officials say. Fifteen businesses in town have temporarily closed amid an outbreak there.

The surge in daily cases at least so far hasn’t resulted in a corresponding spike in hospitalizations.

There were four patients with confirmed COVID-19 diagnoses hospitalized around the state as of Tuesday, according to Jared Kosin, president and CEO of the Alaska State Hospital and Nursing Home Association. Another 16 patients were hospitalized with possible infections that remained under investigation.

In Anchorage, where the state’s population is centered and some of the sickest people get treated, capacity dropped over the past week for beds not in the ICU.

The seven-day average for non-ICU beds in the municipality was 81% on Tuesday, according to hospital association data. The increase is not associated with COVID-19 patients and remains within normal levels of capacity, Kosin said.

“It just seems like things can happen quickly,” he said. “Right now, we’re still holding where we were last week but the case counts are starting to really get high. If those things start translating into hospital cases, capacity can get sucked up pretty quickly.”

On Tuesday, the Yukon-Kuskokwim Health Corp. announced a COVID-19 case within a Southwest Alaska village involving a person who does not live there. The person is isolating, according to a statement from the health corporation.

“Contact tracing indicates there is high likelihood this is a travel-related case and risk of exposure within the community is very low,” YKHC said in the statement.

In the statement, the health corporation recommended testing in the community next week, since it can take five to eight days after exposure for someone with COVID-19 to “begin shedding the virus and return a more accurate test result,” YKHC said.

An employee for the Norton Sound Health Corp. in a regional village tested positive for COVID-19 over the weekend. The asymptomatic case was found through routine employee testing and the person hadn’t traveled recently, the health corporation said in a statement. On Monday, Norton Sound Health Corp. “mobilized a health care response team to conduct testing for close contacts, employees and other community members,” the health corporation said.