Alaska records another 42 virus cases among residents and nonresidents 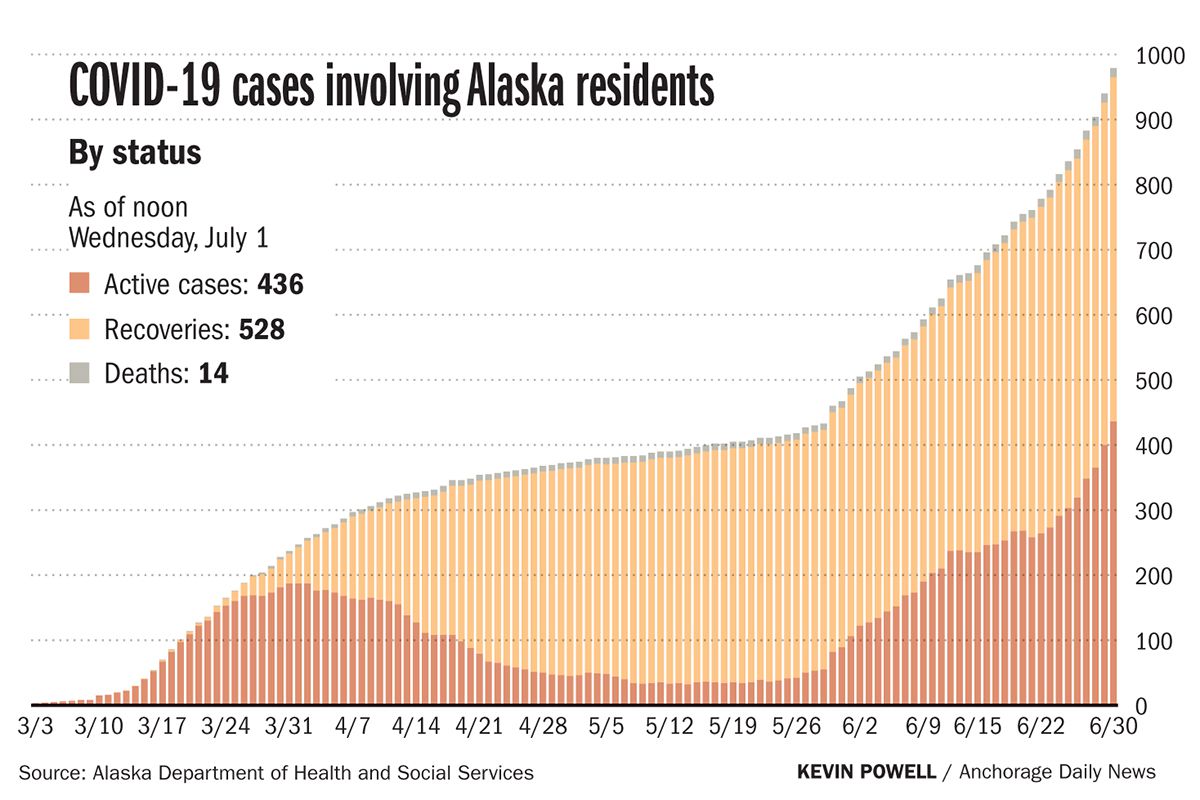 Another 38 Alaska residents tested positive for the coronavirus as of Wednesday, according to state data, sending the number of active resident cases to yet another high since the start of the pandemic.

In total, there are 436 resident cases considered active — meaning they aren’t considered recovered from COVID-19 — and 148 active cases involving non-Alaskans, according to the state’s COVID-19 data dashboard. Total recovered cases include 528 Alaskans and 50 nonresidents.

Since the start of the pandemic, 978 Alaskans and 198 people from out of state have tested positive for the illness. The state reported one new confirmed COVID-19 hospitalization, bringing the total to 68 since March, and no new deaths.

Fourteen Alaskans have died with the virus, including four people who were out of state at the time.

The new resident cases involve 15 Anchorage residents, two people from Eagle River, two from Palmer, four from Wasilla, one from Willow, one from Homer, two from Kenai, one from Soldotna, three from Fairbanks, three from Tok, one from Nome, one from Ketchikan and one from a smaller community within the Northwest Arctic Borough.

Another resident case was reported in Seward, where a growing outbreak has prompted several businesses to close temporarily. The Seward City Council on Wednesday is expected to consider emergency measures including banning large gatherings, reducing capacity at many public-facing businesses, requiring the wearing of face coverings in public buildings and closing city-owned campgrounds.

Anchorage, the state’s largest city, implemented an emergency order requiring the wearing of masks in indoor public spaces on Monday in response to rising virus cases locally and statewide, though compliance has not been universal. Alaska Gov. Mike Dunleavy on Tuesday urged Alaskans to cover their faces in public and maintain social distance ahead of the Fourth of July holiday.

[As Fourth of July looms, governor urges Alaskans to mask up and keep their distance]

Data show that out-of-state workers in the seafood industry, many of whom must undergo testing before being allowed to work in Alaska, account for 125 of the total nonresident cases reported across the state.

The state reports new data daily based on the previous day’s test results.

On Tuesday, 2,215 tests were run across Alaska, bringing the total since the start of the pandemic to 114,400, according to state data. Those numbers reflect individual tests run at state labs, commercial labs and health care facilities, and not necessarily the number of people who have been tested.