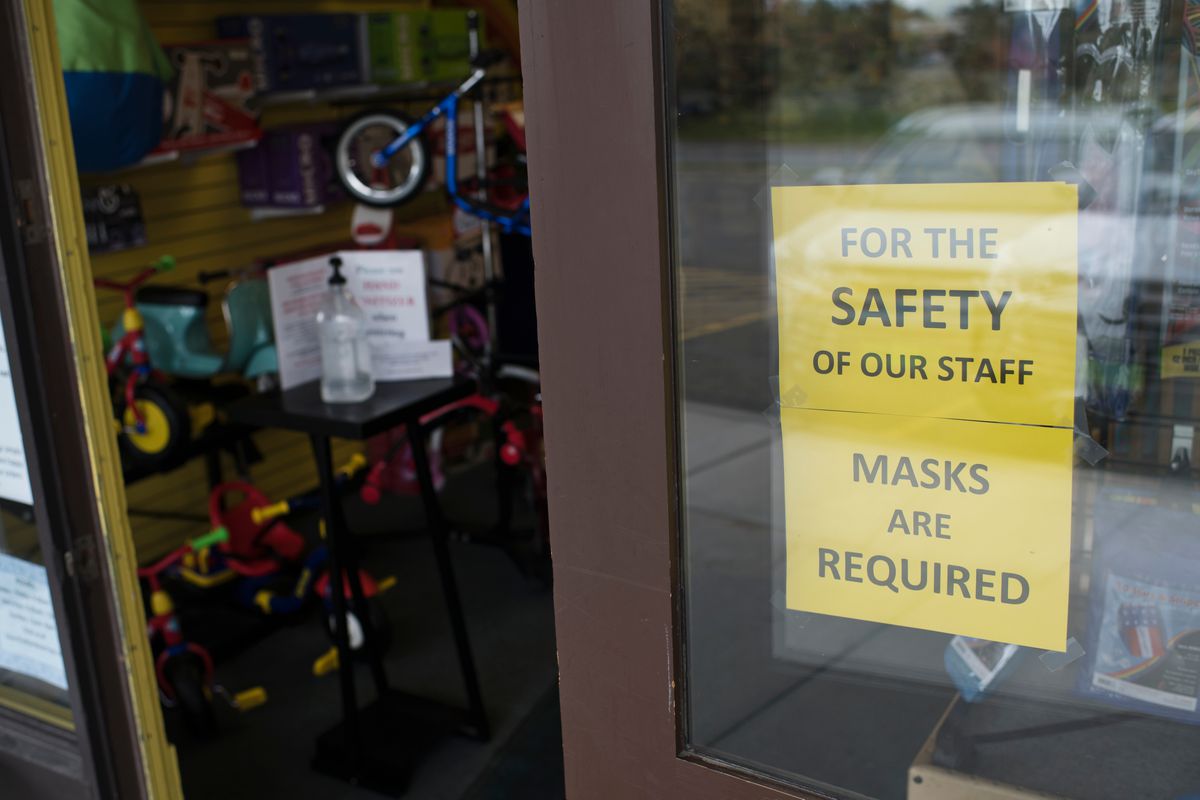 A sign near the entrance to Over the Rainbow toy store in Anchorage alerts customers to a mask requirement on June 29, 2020. (Marc Lester / ADN)

A sign near the entrance to Over the Rainbow toy store in Anchorage alerts customers to a mask requirement on June 29, 2020. (Marc Lester / ADN)

As COVID-19 surges around the nation, Alaska is seeing a continued swell of new cases.

Between residents and non-Alaskans, the state on Thursday reported a new daily high of 50 new virus cases, most of which were concentrated in Southcentral Alaska.

For much of May, Alaska had few new cases of the virus that’s been tied to more than 100,000 deaths nationwide. Then the state lifted almost all of its pandemic restrictions on businesses and gatherings on May 22. At the end of May and into June, COVID-19 cases quickly sprang up again throughout the state.

There were no new deaths or hospitalizations of people confirmed to have the virus, according to the state’s COVID-19 data dashboard. A total of 14 Alaskans have died with the virus, including four who were out of state at the time.

The Municipality of Anchorage saw the largest influx of new cases reported Thursday, with 13 more cases among Anchorage residents, one involving an Eagle River resident, one involving a Chugiak resident, and one in an out-of-state visitor to Anchorage. Earlier this week, the municipality implemented mandatory mask wearing in most indoor public spaces in response to the continued rise in cases.

On Wednesday, Anchorage health officials said the city had reached its maximum capacity to conduct contact tracing. New cases in the municipality involve several people who had contact with dozens of people, while earlier in the pandemic, cases typically involved people with just a few close contacts.

“In this last week, we’ve a lot of cases that are associated with locations where there’s well over 100 people that they may have interacted with, and we can’t trace or contact any of them,” Anchorage Health Department Director Natasha Pineda said.

On Thursday, the Matanuska-Susitna Borough saw a spike in cases among residents there, with nine people from Wasilla testing positive as well as four people from Palmer and one from Big Lake.

And in Seward, new cases of the illness continued to climb Thursday amid an outbreak there, with the state reporting three new cases involving residents and three among visitors. Ahead of the Fourth of July weekend, the city instituted several protective measures, including the mandatory wearing of face coverings in indoor public spaces and capacity limits for local businesses.

The rest of the new COVID-19 cases among Alaskans dot the state, with one case each among residents of Fairbanks, North Pole, a smaller community on the northern Kenai Peninsula, Kodiak and Sitka. Two Tok residents also tested positive for the virus.

In total, there are 626 active cases of the virus among both residents and visitors in Alaska, according to data from the state’s health department updated Thursday. Since the start of the pandemic, 1,017 Alaskans and 209 people from out of state have tested positive for COVID-19.

Seafood industry workers from out of state were involved in two new cases in Dillingham, one in Unalaska and one in the Bristol Bay and Lake & Peninsula boroughs reported Thursday.

Of the 21 COVID-19 cases in Dillingham — all involving people from outside Alaska — 17 are associated with OBI Seafoods’ Wood River plant, according to Kelsa Brandenburg, executive assistant with the City of Dillingham. One of the 17 had mild symptoms and the rest were asymptomatic, Brandenburg said.

Since Monday, nine seafood workers at a plant in Naknek within the Bristol Bay Borough tested positive for COVID-19 during routine screening, said Mary Swain, executive director of the Camai Community Health Center. None of the workers had symptoms and had been in quarantine, she said. Swain said she expected more workers who tested positive to head to Anchorage to finish isolating there.

There were also nonresident cases reported among people in Haines, Kodiak and Petersburg on Thursday.

A traveler from outside of the state tested positive for COVID-19 in Dillingham while on a family vacation on Thursday, the city said in a statement. The asymptomatic traveler tested positive at the start of a two-week quarantine and was the only family member to test positive, according to the city.

That case is expected to be reflected in state data Friday, since the Alaska Department of Health and Social Services reports new cases daily based on test results returned the previous day.