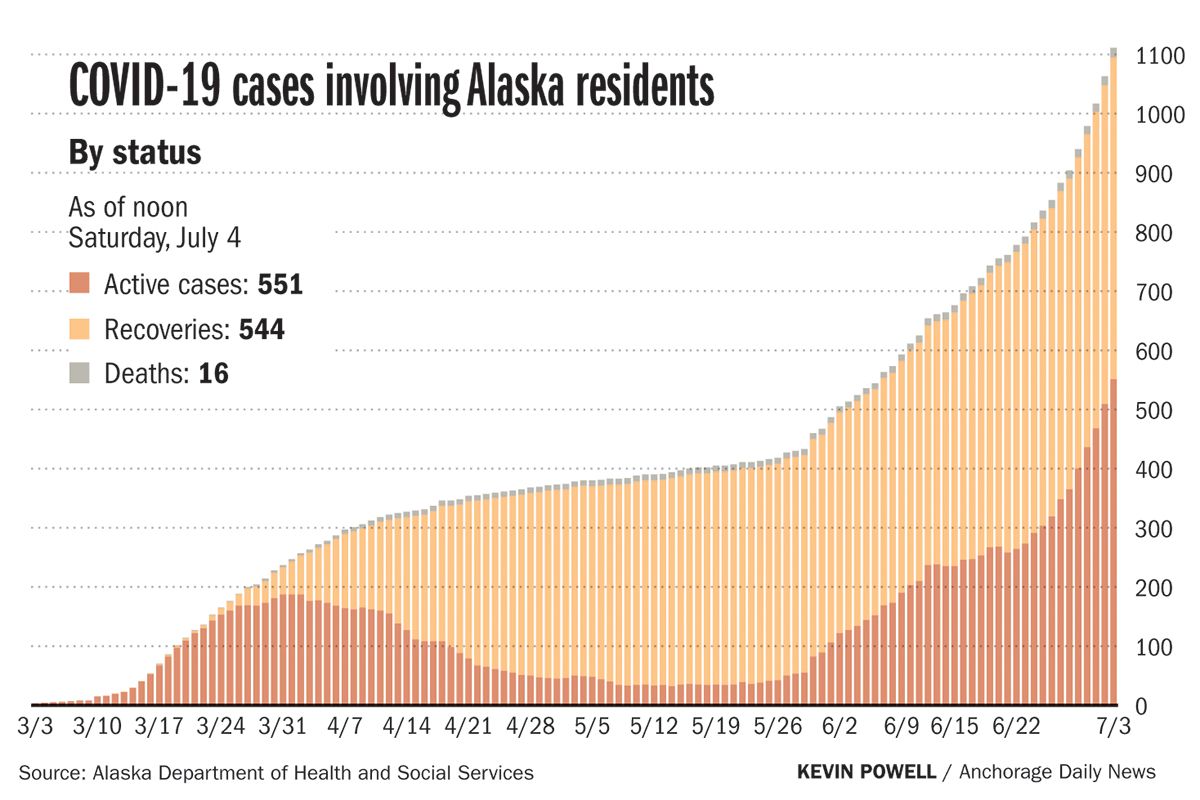 As Alaskans commemorated Independence Day, the state reported another death associated with COVID-19 and 55 more cases among residents and nonresidents.

The 16th reported death of an Alaskan with COVID-19 involved an Anchorage man in his 70s with underlying health conditions, Alaska Department of Health and Social Services spokesman Clinton Bennett said Saturday. The man died in Alaska, though Bennett was not immediately able to clarify when his death occurred.

The state on Friday reported a 15th resident death involving an Anchorage man in his 80s who died in early June. In that case, the virus “was listed as a contributing cause of death,” the state health department said in a statement.

“We are thinking of the loved ones of the person who died,” the state’s chief medical officer, Dr. Anne Zink, said in statement Friday. “We are concerned about Alaska’s sharp rise in cases and hope everyone takes this as a warning call to limit contacts this weekend, stay six feet apart from non-household members, wear a face mask and wash your hands often.

“If you are sick, even with mild COVID-19 symptoms, please isolate yourself and seek testing. We need all Alaskans working together to break infection chains.”

Forty-eight residents and seven non-Alaskans newly tested positive for the illness caused by the coronavirus as of Saturday, according to the state health department’s COVID-19 dashboard. Since the start of the pandemic, 1,111 Alaskans and 230 nonresidents have tested positive. Of those, 551 resident cases and 174 nonresident cases are active, meaning they are not considered to be recovered from COVID-19.

The new cases reported Saturday continue a surge in daily case counts and active cases since the state lifted most pandemic-related restrictions on businesses and social gatherings in late May. State officials have said they expect coronavirus case numbers to rise as people mix together, but they believed the state had the health care capacity and supply of personal protective equipment to manage an increase in cases.

It is time to pull back and slow down. Don't go to indoor bars, pick up food instead of dine in, air hugs instead of real hugs, elbow bumps instead of handshakes. Take care of your physical and mental health while minimizing the spread of COVID. 6/

The influx of new cases has strained the state’s ability to swiftly conduct contact tracing, however, with new cases now involving dozens or hundreds of contacts — as opposed to just a few contacts per case, which was more often the situation earlier in the pandemic. In the state’s largest city, health officials this week said Anchorage had reached its maximum capacity to conduct contact tracing.

Investigating recent cases and tracking their contacts is a key component in helping limit the spread of the virus.

Three more Alaskans confirmed to be infected with the virus required hospitalization, bringing that total to 72 since the coronavirus was first detected in the state. There were 23 people with suspected or confirmed cases of the illness currently in the hospital, according to state data Saturday, which is down two from the previous day.

Fourth of July celebrations were canceled across the state, prompting Alaskans to celebrate on a smaller scale this weekend and organize their own festivities. Ahead of the holiday, state officials — including Gov. Mike Dunleavy — urged Alaskans to wear face coverings and maintain a physical distance of 6 feet from other people to avoid spreading the coronavirus.

Anchorage emergency management officials urged residents to celebrate Independence Day while actively taking steps to curb the spread of the virus, describing the holiday weekend as “a critical point in our community’s fight against COVID-19.”

Southcentral Alaska saw the bulk of new cases reported by the state Saturday. The new cases involve 32 residents of Anchorage, where the city health department confirmed COVID-19 exposure at more than a dozen establishments on specific dates in June. Health officials urged anyone who visited those businesses — mostly bars — at the specified times to monitor themselves for COVID-19 symptoms and get tested.

Elsewhere in Southcentral, four residents of Wasilla, one in Palmer, two in Willow and one in Soldotna also were confirmed to have COVID-19, according to state data.

The state reported no new cases out of Seward among test results returned Friday, but the city said four new cases emerged there Saturday. (The state reports new virus cases daily based on test results returned the previous day, and the new Seward cases will likely be included in the state’s count Sunday.) Officials in Seward this week limited gathering sizes, required masks in indoor public spaces and restricted capacity at businesses in an effort to contain an outbreak involving a couple dozen people.

The state on Saturday also reported four cases among residents of Fairbanks, one in Petersburg and one each in smaller communities in the Yukon-Koyukuk Census Area, Bethel Census Area and Bristol Bay plus Lake and Peninsula boroughs. The state doesn’t report the name of communities smaller than 1,000 people as a means of privacy protection.

The Bristol Bay Area Health Corp. said in a statement that a Bristol Bay-area resident who developed symptoms of COVID-19 after traveling to Anchorage tested positive Friday. That person is self-isolating and several close contacts of theirs were “instructed to remain in strict quarantine,” the health corporation said, adding that “the City of Dillingham and the affected village have also been notified of this new index case.”

On Friday 2,524 tests were run, out of 122,732 tests processed since the start of the pandemic, according to state data. Testing data reflects individual tests that were run, and not necessarily the number of individuals who have been tested.

Alaska health officials continue to urge Alaskans to maintain a distance of 6 feet from non-household members; frequently wash their hands; wear a mask in places where physical distancing is difficult to maintain; wipe down and sanitize frequently touched surfaces; stay home if they feel sick; and get a COVID-19 test if they’re experiencing symptoms of the illness.