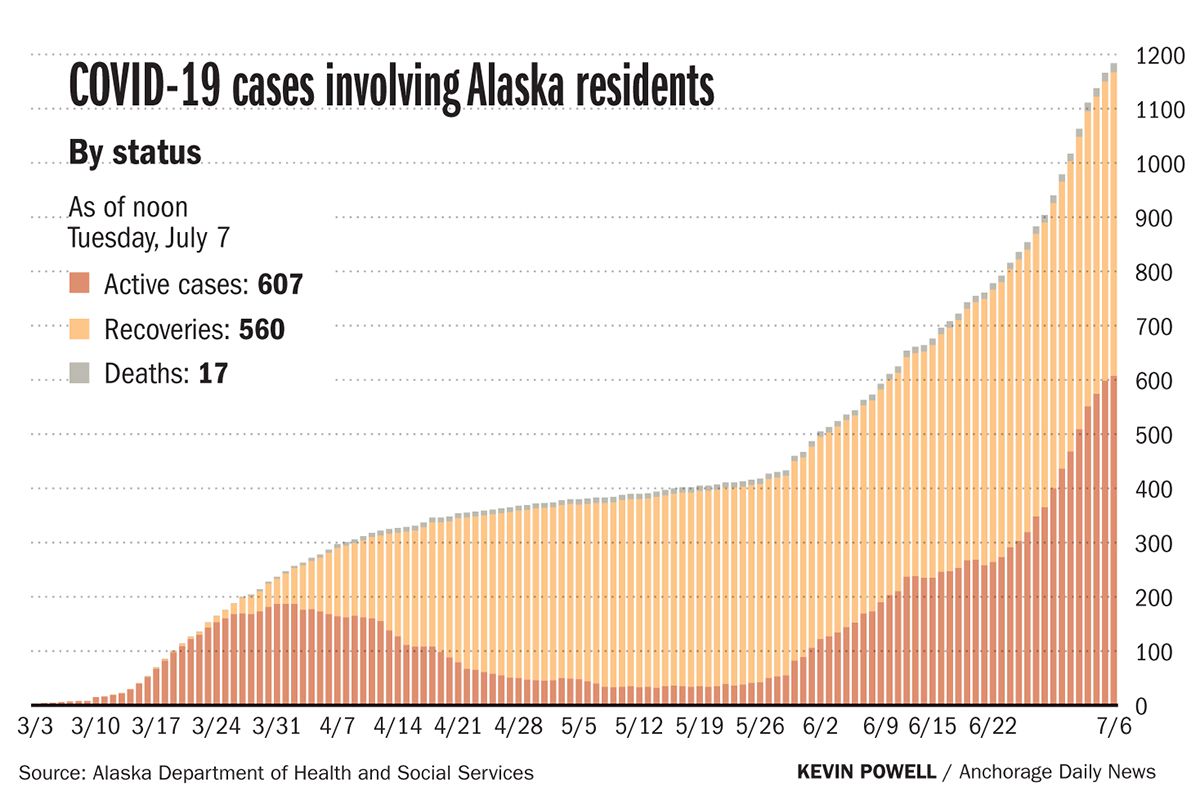 Another Alaskan has died while infected with the novel coronavirus and four more have become ill enough to be admitted to the hospital, the state health department reported Tuesday.

The newly reported death is the 17th fatality involving a state resident confirmed to have COVID-19. Dr. Anne Zink, the state’s chief medical officer, said in a briefing Tuesday that the case involved an older Alaskan with comorbidities who died in Alaska. The Mat-Su woman was in her 70s and died recently, Alaska Department of Health and Social Services spokesman Clinton Bennett said Tuesday night. According to state data, she was from Wasilla.

The newly reported hospitalizations bring the state’s total to 78 since the start of the pandemic.

Alaska has been seeing a steady rise in active coronavirus cases since late May, when the state lifted most pandemic-related restrictions in response to low daily case counts and a boost in personal protective equipment and health care capacity. Several cases have been tied to bars and other entertainment establishments, and state and local health officials urged Alaskans to take proactive measures to stem the spread of the virus ahead of the Independence Day holiday last week.

The influx of cases has strained the state’s ability to swiftly conduct contact tracing, and Anchorage health officials last week reported the city had maxed out its capacity to investigate recent cases and track their contacts — a key component in helping to curb the spread of COVID-19.

Zink said Tuesday that the state health department has “been building up contact tracing for some time,” including hiring additional staff.

There were 23 new virus cases as of Tuesday, according to the state health department’s COVID-19 dashboard, including 19 residents and four non-Alaskans. Most new cases were concentrated in Anchorage, where 12 residents and two people from out of state tested positive, according to state data. The state health department also reported two cases among Wasilla residents and one new resident case each in Eagle River, Kenai, Cordova, Ketchikan and a smaller community within the Yukon-Koyukuk Census Area.

The remaining nonresident cases involve a tourism industry worker in Seward and someone in a location described as “unknown” in state data.

The Ketchikan Emergency Operations Center on Monday announced two cases there involving a resident and a seafood industry worker. The Ketchikan resident took a COVID-19 test at the airport traveler testing site Saturday and was instructed to quarantine until their results came back, Ketchikan officials said in a statement. The resident received their positive results Monday, and they are asymptomatic and self-isolating, officials said.

The other case — involving an asymptomatic individual who tested positive Monday — was identified through a testing program at a seafood processing plant, according to Ketchikan officials. The person has been quarantining since arriving in Ketchikan and is now in isolation, officials said. It was not immediately clear whether the individual was an Alaska resident or not.

The City of Seward reported two new positive tests on Tuesday. That brings the case count there to 46 — most of them testing positive in the past few weeks in a local outbreak that began June 21.

Since the beginning of the pandemic, 1,184 residents and 241 nonresidents have tested positive for the virus. Of those, 607 resident cases and 182 non-Alaskan cases are considered active, meaning they have not yet recovered from COVID-19.

Alaska health officials continue to urge members of the public to maintain a physical distance of at least 6 feet from people they don’t live with; wear a face covering in places where it’s difficult to maintain physical distancing; wash their hands frequently; often clean and disinfect frequently touched surfaces; stay home if they’re feeling sick; and get tested for COVID-19 if they experience symptoms of the illness.

“There is no reason to hit the panic button,” he said. “We’ve lost 17 Alaskans, which is terrible. And our condolences go out to the families. But in terms of managing a pandemic right now, we’re ... doing OK.”

He added that the recent rise in cases was to be expected.

“We knew that this virus was highly contagious, and that we would see an uptick in cases, just like folks are across the country. But we still have some of the best numbers in the country and we want to keep it that way,” Dunleavy said.

When asked why virus case numbers have risen recently, Zink said, “I don’t think we can say that there’s one specific reason for increasing cases. The more that we mix, the larger the gatherings, the closer we’re together, the higher the the risk of spread.”

She encouraged Alaskans to consider four risk factors before participating in an activity or gathering: whether they’ll be in an enclosed space; crowd density and whether maintaining proper distancing will be a challenge; how long they might be interacting with others; and whether “forceful exhalation” — for example, while shouting, sneezing or singing — may occur.

Zink noted that the understanding of how the coronavirus is spread has evolved over time. While there was initially a focus “on touching and surfaces ... the data has just become more and more clear that the spread can really happen in closed, confined spaces via microdroplets and people talking in enclosed spaces,” she said. “And so I think the mask makes a bigger difference now than we initially thought versus — the washing is still really, really important, but ... (not to) the same degree that it initially did at the beginning.”

Close contacts develop when people spend more than 15 minutes within 6 feet of one another, Zink said.

“The protective measures that businesses can put into place to minimize those people being — any of their workers being — within close contact for 15 minutes or more keeps their business open and moving forward,” Zink said.