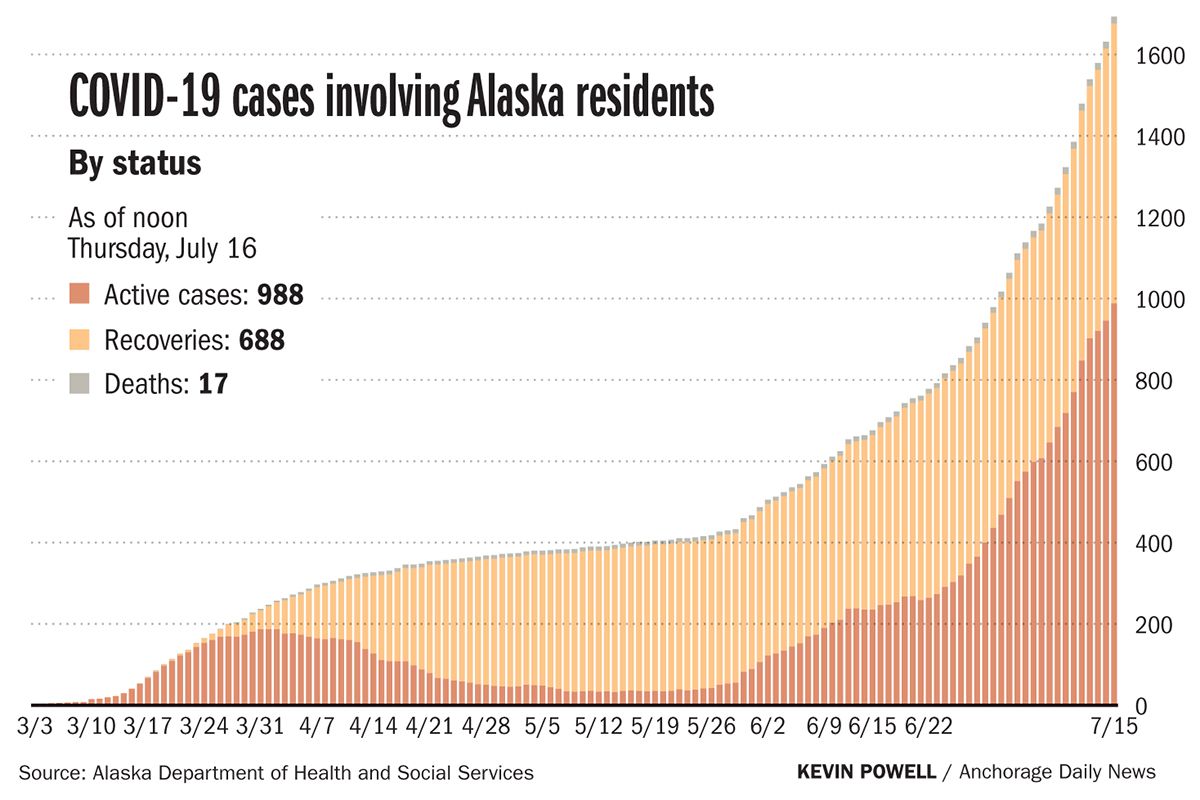 Alaska’s COVID-19 case tally continued to climb Thursday as the state reported 75 new cases of the illness — 65 residents and 10 non-Alaskans — on its data dashboard.

In total, there were 1,235 active cases of the virus involving residents and nonresidents statewide by Thursday, according to data from the state’s health department. A total of 780 people have recovered from the illness in Alaska, data showed.

While Alaska’s daily case tally remained in the single digits for part of April and much of May, new cases began to pop up throughout June and July after the state lifted most pandemic restrictions. The daily new case count reached a daily record high on Sunday, when 116 cases were reported.

When asked whether officials expected the current spike in cases after the state reopened, Alaska’s chief medical officer said the trajectory of the pandemic depends on what actions Alaskans take.

“It really depends on Alaskans’ behavior and what we choose to do or don’t do, and that’s a really hard thing to predict,” Dr. Anne Zink told reporters Thursday.

Health officials can provide information and data on the disease and where the state is, Zink said, “but really, we as Alaskans are the ones who make this epi curve, or don’t. And we’re the ones in control of the transmission.”

When cases were investigated weeks ago, there were a “really finite number of close contacts” and places where someone may have been exposed, Louisa Castrodale, an epidemiologist with the state’s health department, told reporters Thursday.

“And now, as folks have started to move around a little bit more, the case interviews that we’re doing and the number of contacts that we’re finding, it’s really increased dramatically,” she said.

Initially, the department had a clearer view of where someone likely got sick and who they might have exposed.

“Now, we have a much blurrier picture of that because there’s just been so much more activity and close contacts and sort of opportunities for both acquiring infection and passing it on,” Castrodale said.

Many of the new cases announced Thursday were tied to residents and visitors in Anchorage and the Fairbanks North Star Borough.

The state reported 23 new cases involving residents of Anchorage, where contact tracing resources are at maximum capacity and cases have climbed steadily, plus one involving someone from Chugiak. There was also one more case involving a nonresident within Anchorage reported Thursday.

An Anchorage-based Alaska Airlines customer service agent tested positive for COVID-19, according to an email sent to employees this week. The employee was contacted by public health officials, and company leadership reached out to co-workers who spent more than five minutes within 6 feet of the infected person. The employee last worked July 10 from 10 p.m. until 5 a.m., according to the email. They were described as “doing well.”

Alaska Airlines had no further information to provide Thursday, spokesman Tim Thompson said. The company has protocols in place for employees on duty involving masks, hand sanitizer, social distancing and cleaning, Thompson said. There are plastic barriers between guests and employees at some counters. “We have also been asking all employees to stay home if they do not feel well,” he wrote in an email. “The safety of our employees and guests is our top priority.”

In the Fairbanks North Star Borough, where cases are also spiking, there were 23 new cases, including 17 cases involving Fairbanks residents and six among North Pole residents. Additionally, five people from out of the state tested positive for COVID-19 in the borough, including four in Fairbanks and one in North Pole, according to Thursday’s updated state data.

Emergency room physicians in Fairbanks and Anchorage reported seeing more patients with symptoms of the virus or positive test results this week.

The total number of Alaskans whose deaths were associated with the illness remained at 17 on Thursday.

The rest of the cases newly reported in state data Thursday are scattered across the state. In the Kenai Peninsula Borough, new cases involve three residents of Kenai, four residents of Soldotna and one resident each of Nikiski, Sterling and Seward. One resident and one nonresident in smaller, unspecified communities within the southern part of the borough also tested positive.

There were also cases involving one resident each from Kotzebue, Wasilla and Haines, as well as one nonresident case each in Kodiak, Sitka and Wrangell.

Since March, 1,693 residents and 339 non-Alaskans have tested positive for COVID-19.