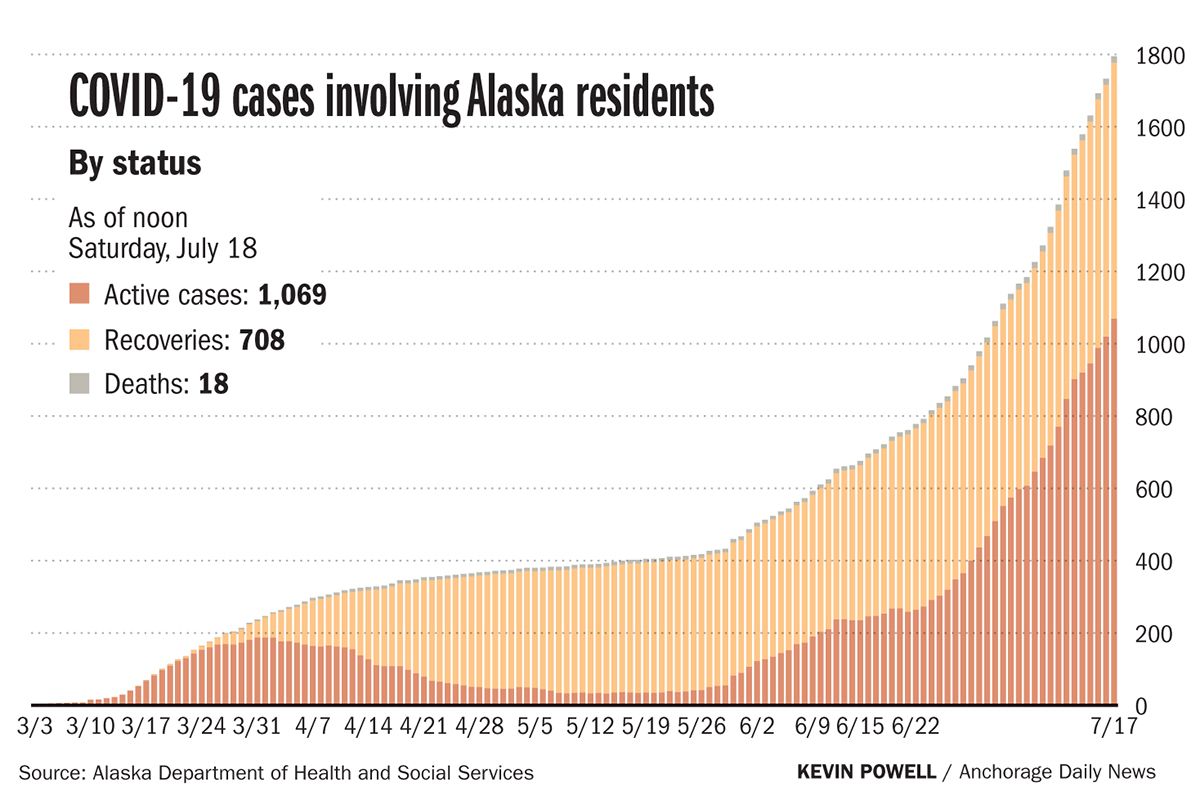 Alaska reported one new death and 78 new cases of COVID-19 on Saturday as active virus cases continued to ascend statewide.

The newly reported death was in Anchorage woman in her 50s who had pre-existing conditions, the state health department said in a statement Saturday.

According to the state’s COVID-19 data dashboard updated Saturday, another person confirmed to be infected with the virus was hospitalized, bringing that total to 99 since the start of the pandemic.

Between residents and nonresidents, there are 1,335 active cases of the illness statewide as of Saturday while 806 people were listed as recovered. In total, the state has seen 2,159 confirmed cases of COVID-19: 1,795 residents and 364 non-Alaskans.

Hospital officials in Alaska said this week that they were seeing more people with COVID-19 symptoms and positive test results in emergency departments. The state’s new daily case counts have surged since late May, and several other states nationwide are grappling with soaring numbers of virus cases, hospitalizations and deaths.

Many of the new cases reported Saturday — involving 62 residents and 16 nonresidents total — are in the Anchorage area, where officials warned Friday that the municipality was potentially 10 weeks away from meeting its intensive care unit bed capacity and contact tracing continues to be strained.

In Anchorage, new cases involve 31 residents and four nonresidents. There was also one case each involving residents of Chugiak and Eagle River.

[Alaska does more COVID-19 tests with fewer positives than most other states. That doesn’t tell the whole story.]

Unalaska officials announced Friday that six crew members of a Bering Sea trawler who arrived to “offload frozen product” there Thursday tested positive for COVID-19. The American Triumph vessel is part of the American Seafoods fleet and left for Alaska from Oregon on June 27, according to a statement from the company.

In May and June, American Seafoods had crew members from three vessels test positive for the illness, including four crew members on the The American Triumph and 94 on the American Dynasty, The Seattle Times reported.

All seven people who reported symptoms on the vessel in Unalaska, including the six who tested positive, have been isolated, the city said. The other 112 crew members are being screened and tested, and crew members are otherwise restricted to the boat.

In the Matanuska-Susitna Borough, four people from Wasilla and two from Palmer tested positive for COVID-19, state data showed.

In the Kenai Peninsula Borough, two residents of Seward and four Soldotna residents tested positive, as did one person each from two smaller communities in the southern and northern parts of the borough.

Two people from unspecified places in the Valdez-Cordova Census Area tested positive as well, state numbers showed. The state doesn’t report the names of communities that have fewer than 1,000 residents as a means of privacy protection.

Fairbanks saw nine new cases among residents. Cases of the illness have spiked in the Interior city recently, and this week local leaders there issued a proclamation encouraging the use of face coverings and continued disease prevention precautions.

Two people from Juneau and a nonresident there also tested positive, state data showed. On Friday, the city announced a case of community spread of the illness that was later tied to eight other new cases there associated with the seafood processor Alaska Glacier Seafoods.

There were also new cases of COVID-19 involving a resident of Ketchikan and a resident of Utqiagvik, as well as one case each among nonresidents in smaller communities within the Denali Borough and the Bristol Bay and Lake & Peninsula boroughs. The state also listed a nonresident case associated with an unknown location.