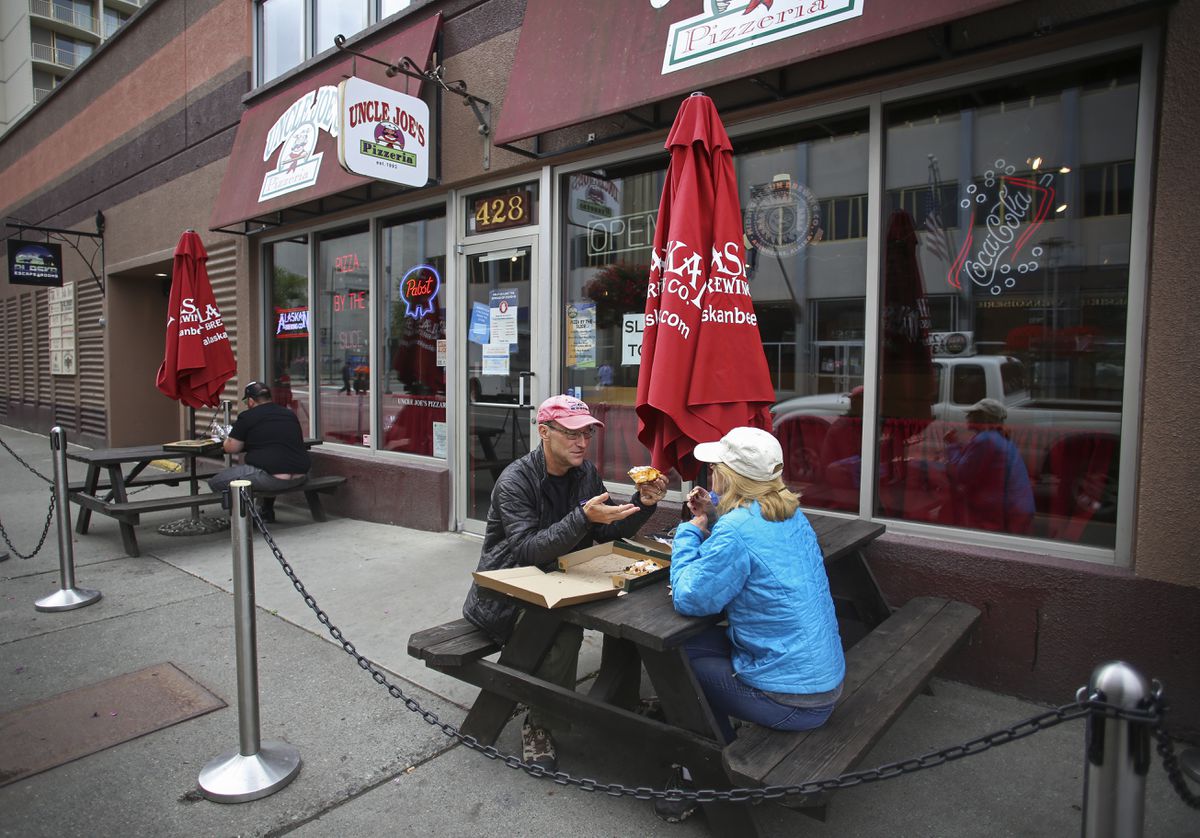 Nancy and David Brady split a pizza outside of Uncle Joe's Pizzeria in downtown Anchorage on Aug. 3, 2020. (Emily Mesner / ADN)

Nancy and David Brady split a pizza outside of Uncle Joe's Pizzeria in downtown Anchorage on Aug. 3, 2020. (Emily Mesner / ADN)

Anchorage’s new emergency order halting indoor dining in restaurants and bars sent business owners scrambling over the weekend: Some created makeshift outdoor seating areas in parking lots and on sidewalks. Others repurposed food that would otherwise go to waste. A number notified employees of layoffs and cutbacks on hours.

Intended as a “reset” to slow the spread of COVID-19 in Anchorage and lasting through Aug. 30, the new order also drew a protest, and at least one establishment openly defied it. Many in the industry say the shutdown, at a time when federal aid is running out and state aid is slow to arrive, will decimate their businesses.

Anchorage Mayor Ethan Berkowitz said in an interview Monday that while the order is unfair to bars and restaurants, they are “bearing the price, being the shield that protects the community.”

Spreading occurs rapidly in bars and restaurants because they are built around social interactions, where people eat and drink in close proximity without masks on, he said.

On Monday, 40 more cases of the coronavirus and one new death were reported in Anchorage, bringing the total active cases in the municipality to more than 1,370. The city saw record daily highs reported in recent days, with 158 on July 26, 110 on Saturday and 111 on Sunday.

Still, the city’s new emergency order has been met with some resistance.

Darrel Alford, a bartender at Jens’ Restaurant in Midtown, started an online petition over the weekend calling on the mayor to repeal the policy.

After about 24 hours, the petition had about 2,500 signatures and was continuing to gather more, he said.

“I guess there’s just a lot of people out there in agreement with me, who are just frustrated and feeling like the industry is maybe being singled out,” he said. “There are a lot of hospitality workers in this city. It’s going to hurt everyone.”

[‘I can’t afford to shut the doors again’: Anchorage restaurants and bars face another round of COVID-19 restrictions]

A crowd gathered Monday evening outside Loussac Library to protest the shutdown.

“We’ve worked very hard through this whole shutdown. We’ve done everything,” said Tudor Bingo owner John Powers, who attended the rally. Bingo halls are also shut down as part of the municipality’s new emergency order. He said he’s now forced to furlough two-thirds of his employees.

In Girdwood, Jack Sprat owners Jen and Frans Weits said they are organizing a coalition with other business owners and taking stock of their legal options. Coronavirus cases have been low in Girdwood, they said. Now, they will lose out on August revenue, a busy month which helps sustain them through the slower winter months. The initial federal aid they received has run out and the state and the municipality should provide aid or compensation for their losses, they said.

“We’re exhausted. And it’s been this way since day one,” Jen Weits said. “We scramble to stay alive, scramble to change the way we do business, to stay afloat. Scramble to keep up with the restrictions, make sure employees are safe and everybody’s safe that works with us.”

Kriner’s Diner in Midtown Anchorage opened for business as usual Monday, defying the emergency order. Owner Andy Kriner said the city did not provide details about how it would enforce the order, so he decided to open his restaurant and see what happens.

“If I thought I was endangering anybody I wouldn’t open. I just don’t believe I am,” he said.

City spokeswoman Carolyn Hall released a statement Monday saying that the city is “dismayed and disappointed by the actions of the few.”

She said the municipality is “pursuing all enforcement options, including informing and educating businesses in violation of the Emergency Order as well as issuing fines and Stop Work Orders.”

“Anchorage just experienced our worst week of the pandemic as measured by new cases, active cases, and cases per day,” Hall wrote. “The number of cases has exceeded the Anchorage Health Department’s capacity to rapidly trace and monitor every known case.”

Most Anchorage business owners understand the public health emergency and are complying, she said.

In interviews Monday, many restaurant and bar owners said they were complying but they fear most for their employees. Many will now be laid off or have reduced hours just when the previous CARES Act boost to federal unemployment benefits expires.

At Midnight Sun Brewing, owner Lee Ellis said he’s forced to choose between the livelihood of his employees and his business’s survival. Through the pandemic, he’s continued to pay his employees, even if they can’t work, he said.

“Do we run the brewery into bankruptcy to keep people from living on the street?” he said.

Midtown restaurant Bear Paw Bar and Grill had just opened its doors for the first time when the March shutdown hit, according to its general manager James Mooney. The business held on and reopened as soon as possible in May.

But since the new restrictions were announced Friday, he has felt sick to his stomach, he said. Employees called him in tears, worried for their jobs.

“I have single moms calling me basically begging me to give them shifts, to give them hours — to do anything I can to help them,” he said.

Mooney has had to cut staff by about half — from 80 to about 40 or 50, all working limited hours.

Berkowitz said the city is working on relief programs for employees and that rent relief money is available through the municipality, as well as some small business and nonprofit grants. Another $5 million in aid is coming for small businesses from the municipality’s money it received through the CARES Act, he said. Berkowitz also said the city is looking for ways to directly help workers who’ve been affected by the order.

Berkowitz also said that Emergency Order 12, passed in June, allowed businesses to expand outdoor seating and that 30 establishments have already done so.

Berkowitz said many Alaskans are feeling frustrated because the state has “been slow getting its $290 million of small business aid out the door.” He said he has discussed the issue with Gov. Mike Dunleavy, but the state has also been bogged down by rules.

Berkowitz said that more federal aid should soon come for businesses and that he is part of a group of mayors nationwide that have asked Congress to pay particular attention to bars and restaurants, because they’ve “paid the price across the country.”

“Every time the rules have changed, it’s required a significant investment by these businesses to comply with the new requirements,” she said. They were already adjusting to the previous emergency order, she said. That order significantly reduced their operating capacities, and was passed in late July.

Over the weekend, Mooney doubled the size of his outdoor seating area at Bear Paw with more tents and heaters. The establishment has spent “several thousand dollars” creating a large outdoor dining area in its parking lot, he said.

Curtis Yim, an owner at Ray’s Place, said business had been picking up and the Midtown Vietnamese restaurant was taking steps to add employees.

But the new mandate forced the restaurant to lay off two part-time workers.

“It’s hard to find the positive on this first day,” he said. “Starting today, it’s three steps back.”

Yim said he has generally supported the mayor’s policies to combat COVID-19.

“I feel it’s a little bit harsh on all the bars and restaurants,” he said. “We were keeping good records, following all the protocols, and sanitizing everything since we opened. But because a few bars and restaurants had some cases of COVID, they are including everyone.”

For lunch on Monday, the restaurant set out three outdoor tables in the parking lot. The tables filled up at one point, offering a glimmer of hope, he said. He planned to add more for dinner.

“It just doesn’t seem right serving a customer in the parking lot,” he said. “They get to listen to road traffic. And we’re wondering if it’s going to get rainier or windier.”