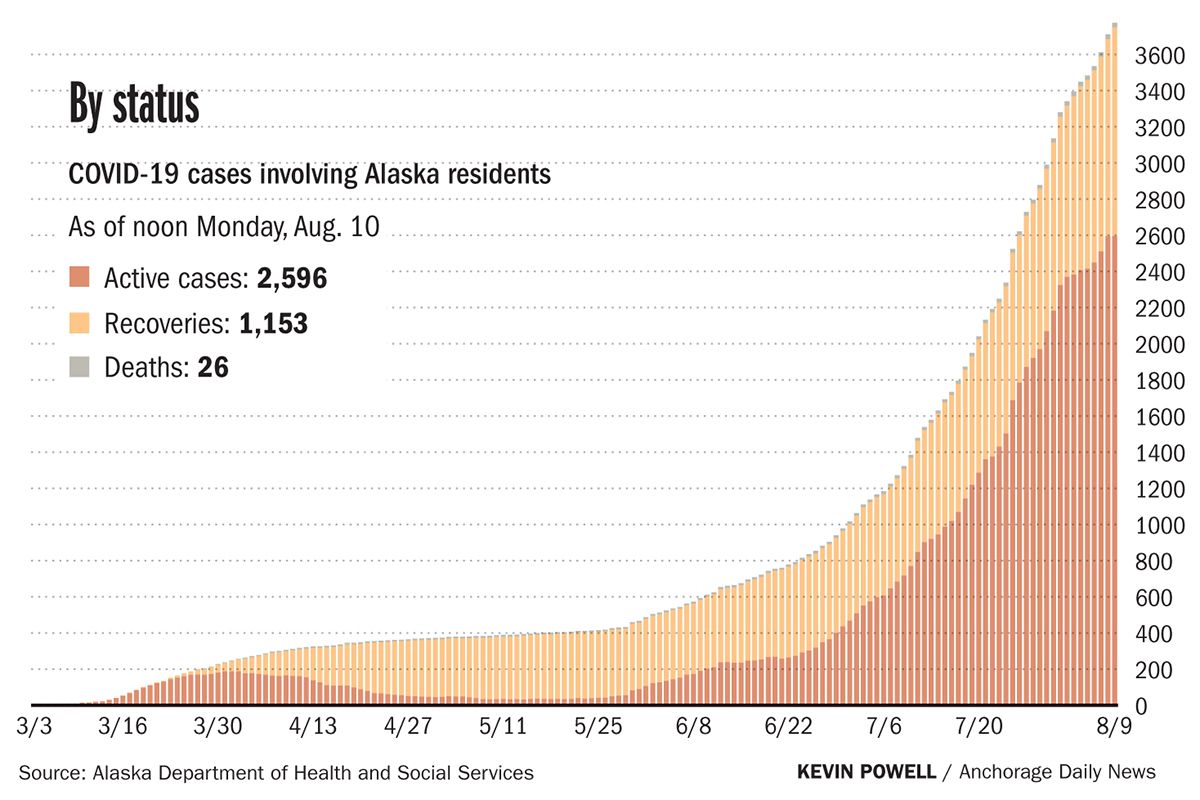 There were 70 new cases of the novel coronavirus reported in Alaska on Monday, along with two new hospitalizations, and no deaths, according to the state.

As of Monday, 27 people were hospitalized with COVID-19 around the state, along with 11 people hospitalized who were under investigation for having the virus.

A crew member who was part of the Alaska Marine Highway System also tested positive for the virus, according to a statement released on Monday by the state. The crew member had recently returned home after working a two-week rotation on the MV LeConte, the statement said.

Over the weekend, the LeConte’s current crew of 23 were all tested, and all results came back negative. The ship’s previous crew are currently undergoing testing. The marine highway’s operating procedure requires evidence of a negative COVID-19 test result taken within seven days before reporting for duty, according to the Alaska Department of Transportation.

It was not clear whether this person was included in Monday’s new case numbers.

The majority of Monday’s new cases were concentrated in Anchorage, which has continued to experience high rates of community spread, but has shown some signs of slowing. In a report prepared at the end of last week, the Anchorage Health Department recorded a daily average of 61 new cases in Anchorage, compared to 65 per day the week before. In July, Anchorage mayor Ethan Berkowitz issued an emergency order that closed all bars, put a halt to indoor dining in restaurants and breweries, limited gathering sizes, and extended and expanded an existing mask mandate. The city recently added five drive-thru testing sites that allow symptomatic residents to get tested at no cost.

In the Anchorage Municipality on Monday, there were 42 new cases announced: 36 among Anchorage residents, and three each among Eagle River and Chugiak residents.

Elsewhere across the state, four cases were confirmed in residents of both Kenai and Wasilla; three each in Juneau and Palmer; two each in Valdez and Willow; and one each in Fairbanks, Sterling, and Sitka.

There was one new nonresident case in an unknown region of the state.

Since the pandemic began in March, a total of 4,539 residents and nonresidents in Alaska have tested positive for the virus, 26 have died and 1,332 have recovered. There are currently 3,181 active cases of the virus in Alaska, according to the state’s coronavirus data dashboard.

A total of 280,343 tests have been conducted in Alaska so far. The average percentage of daily positive tests for the previous seven days is 2.28%.