Family tests positive for coronavirus in Whittier, where most residents live in one big building 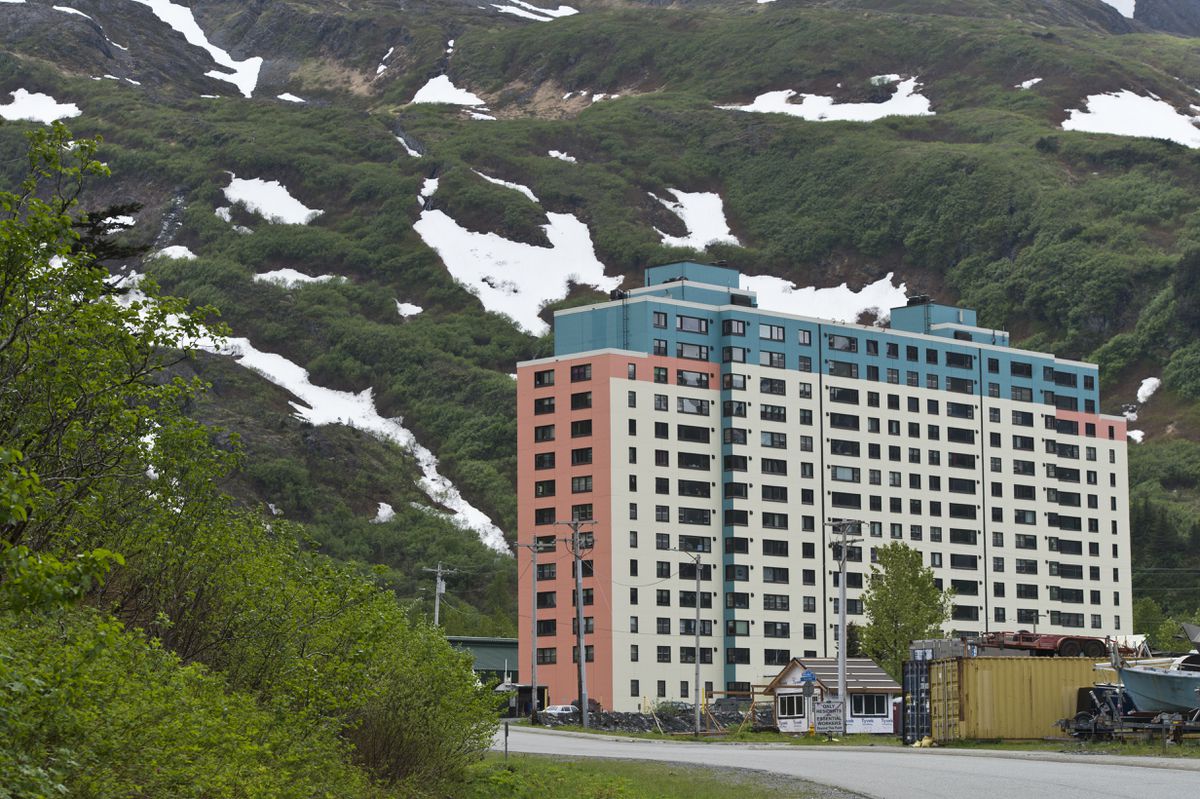 In a town where nearly everyone lives in the same building, COVID-19 has emerged.

The Prince William Sound community of Whittier, where around 85% percent of its 280 year-round residents live in the 14-story Begich Towers building, now has six positive resident cases among a family there, according to Jim Hunt, Whittier city manager.

About a month ago, there were two cases among workers in businesses along the harbor — one part-time nonresident and someone who lived outside of Whittier, Hunt said.

Before that, in early June, 11 seasonal seafood processor workers in Whittier also tested positive for COVID-19 and left for Anchorage along with their close contacts to isolate and quarantine.

The six people who tested positive were isolated immediately, according to a Monday statement from Paul Mueller, the CEO of Eastern Aleutian Tribes, which has a clinic in Whittier. The statement says that any Whittier resident who’s been in close contact with someone outside their household should get tested at the clinic.

They’ve recommended that people, particularly those who are vulnerable and live in the towers, should shelter at home. He said the city is working to figure out who needs help.

“We’re trying to address food and medication for those who are at-risk or unable to procure those services,” Hunt said. “Being such a small community, there’s a large sense of obligation, and people look to the city for answers and assistance.”

Statewide, there were 50 new cases of the novel coronavirus reported in residents and nonresidents on Tuesday, along with seven new hospitalizations and no deaths.

Alaska continues to have a relatively low rate of hospitalization and death associated with the virus.

Nationally, Alaska has the lowest number of deaths, the seventh lowest case rate and is first when it comes to testing per capita, Gov. Mike Dunleavy said during a news briefing Tuesday. The governor said the state’s numbers were “still pretty good,” in terms of managing the illness, but noted “things could change any moment.”

“We feel like we’re managing this right now,” Dunleavy said.

According to the state’s coronavirus dashboard, 31 people were reported as hospitalized with COVID-19 as of Tuesday afternoon, along with nine hospitalized people “under investigation” for having the virus.

In the Anchorage Municipality on Tuesday, there were 23 new cases announced: 22 among Anchorage residents, and one in a Chugiak resident. This is a drop from much higher daily counts reported in the Anchorage area in recent weeks, which reported an average of 61 new cases per day last week, and 65 per day the week before.

Elsewhere around the state, three residents in each Sterling and Juneau tested positive; two in each Soldotna, Wasilla, Palmer and Seward; and one in each Fairbanks, Homer, Dillingham and Utqiagvik. In smaller communities, one resident each in the Kusilvak Census Area, the Northwest Arctic Borough, the Yakutat region, and the Bethel Census Area.

Of the five new nonresident cases, one was in Anchorage, another was in Juneau, and three were in the Dillingham Census Area.

The state does not report the names of communities with less than 1,000 residents.

Since the pandemic began in March, a total of 4,589 residents and nonresidents in Alaska have tested positive for the virus, 26 have died and 1,344 have recovered. There are currently 3,219 active cases of the virus in Alaska.

A total of 290,744 tests have been done in the state. The average percentage of daily positive tests for the previous seven days is 2.36%, which is low enough to indicate a high level of testing being done per capita across the state.