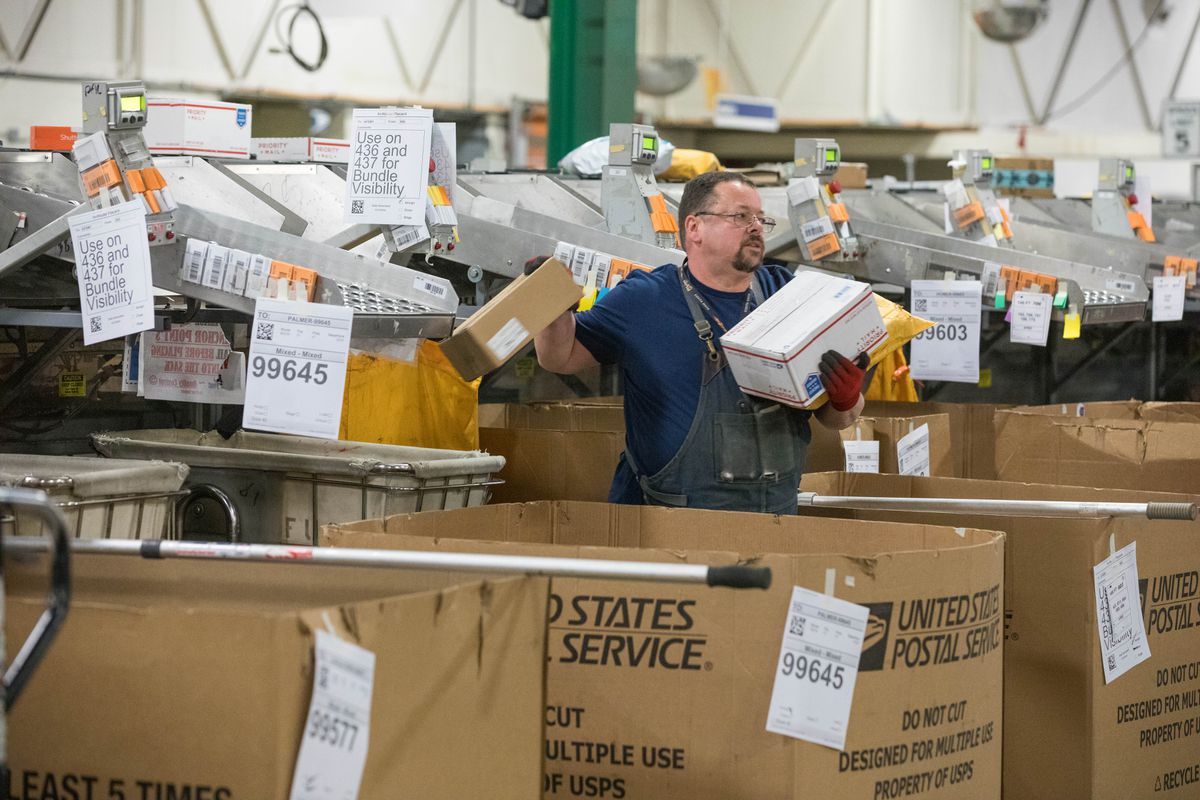 Hours after President Donald Trump said he opposes federal aid for the U.S. Postal Service because he wants to restrict voting by mail, U.S. Sen. Lisa Murkowski called the remarks inappropriate and vowed to pursue such aid anyway.

The other members of Alaska’s congressional delegation, Sen. Dan Sullivan and Rep. Don Young, declined multiple requests for interviews, and in written statements did not answer a question about the president’s remarks. They did say they support federal aid for the Postal Service.

Their likely opponents in the November general election, independents Al Gross and Alyse Galvin, said they are concerned by the president’s remarks and that they also support federal aid.

Meanwhile, despite a national warning that ballots might not be delivered on time for this fall’s elections, the Alaska Division of Elections, Postal Service officials and representatives of several postal labor unions said Alaska’s elections can be conducted on time and without disenfranchising voters.

“The state of Alaska has adequate time built into the times for receiving by-mail applications and mailing by-mail ballots to allow for the complexities of the USPS,” said Tiffany Montemayor, public relations manager for the Division of Elections.

Alaska is seeing record interest in voting absentee by mail this year, but the state’s post offices are not participating in a controversial test program to restrict overtime hours and change operating procedures, according to Postal Service documents and interviews with employees. The program, implemented by Postmaster General Louis DeJoy shortly after his appointment, has been accused of slowing mail service.

Alaska has only one mail-sorting facility, in Anchorage, meaning that only ballots coming from Outside would be affected by the new procedures.

“As far as the election ballots here in Alaska, I don’t foresee there being any issue with that because they’re not implementing the test plan the new postmaster general came out with, so our service standards here in Alaska should stay what they are now,” said James Frankford, vice president of the Alaska branch of the National Association of Letter Carriers.

Don Sneesby is the president of National Mail Handlers Postal Union Local 316, which represents 65 mail handlers in Anchorage, as well as workers in Washington state.

“I don’t think we’re going to have any trouble processing the ballots that are being returned via mail,” he said.

Mail-sorting machines have been removed from many processing facilities nationwide as part of a reorganization.

An internal Postal Service document says one such machine in Anchorage was scheduled to be removed Friday, but Postal Service spokesman James Boxrud said that removal is part of routine procedures undertaken “as necessary to match changing mail and package volumes.”

Sneesby agreed with that assessment.

Amid the COVID-19 pandemic, the Postal Service is seeing fewer letters and more packages, and the machines are used for letters and flat envelopes only.

While mail within the state isn’t yet affected by the new procedures, the Postal Service as a whole is threatened by budget cuts stemming from the coronavirus pandemic, and employees have reported problems with staffing. Letter volume is down significantly, and the Postal Service has not received any aid from Congress, as have small businesses and governments.

James Patarini is president of the Alaska chapter of the American Postal Workers Union.

“Some of our specific issues have less to do with the postmaster general’s new guidelines … and more to do with the specifics about their failure to maintain hiring consistently here in the Alaska district,” he said last week.

Steve Kim, the Anchorage chapter president of the National Mail Handlers Postal Union, said at the Anchorage mail-sorting facility, employees “are still overwhelmed, but (supervisors) are giving away overtime like crazy.”

“The primary should be fine. It’s not going to be too bad, from what I understand,” he said.

Asked about those remarks, Murkowski said, “It is not appropriate. I don’t think that you should use the Postal Service or any federal agency to either push or thwart a particular initiative that you may have.”

Congress has adjourned until after Labor Day, and Murkowski said that while she’s been told she might need to return to the Capitol on 24 hours’ notice for a vote, she isn’t sure when relief legislation will come to a vote.

Young and Sullivan didn’t respond to the president’s remarks but their offices addressed other questions about their support for the Postal Service.

Sullivan, in a written statement, said he supports legislation introduced by Sen. Susan Collins, R-Maine, that would provide up to $25 billion in aid to cover lost revenue and expenses related to the coronavirus pandemic. Sullivan and Murkowski have co-sponsored the legislation.

Young voted against a broad coronavirus aid bill known as the HEROES Act that passed the House and included $25 billion for the Postal Service. His office said a statement that he supports separate legislation for such aid. He also supports other legislation that would offer additional financial relief in the short and long term, the statement said.

Alyse Galvin, who lost to Young two years ago, is one of the candidates seeking to oppose Young in November’s general election. An independent, she is competing against two Democratic candidates for the Democratic Party’s nomination for Alaska’s U.S. House seat.

“This is not the time to reduce that service, at all costs,” she said in an interview.

Combined, that’s the more absentee ballots than any other election — primary or general — in state history, and by Friday morning, 27,749 ballots had already been cast. That’s over a quarter of the turnout in the entire primary election two years ago.

“I think it’s absolutely outrageous that President Trump is trying to defund the Postal Service in the middle of a national election and a global pandemic,” he said in an interview.

He called the president’s actions hypocritical because Trump and his wife requested mail-in ballots for Florida’s primary election.

“Undermining the post office right now is absolutely the wrong thing to do,” he said.