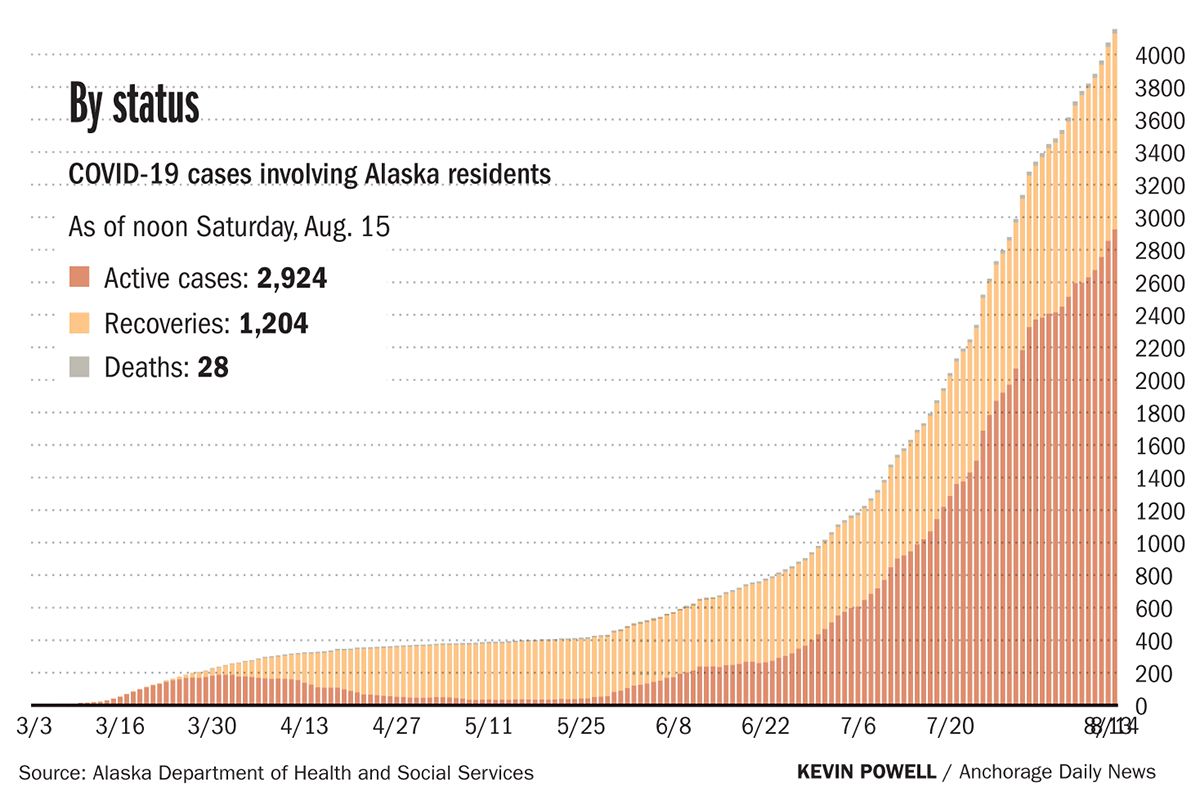 Alaska reported the 28th death of a resident with the coronavirus on Saturday and 87 new cases, including one nonresident.

The newly reported death involved an Anchorage man in his 80s with underlying conditions, according to the state health department.

The number of people hospitalized with confirmed cases of the illness ticked up to 36 on Saturday from 33 on Friday, according to the state’s coronavirus database. As of Saturday, 2,924 cases among residents are considered to be active out of the 4,156 confirmed since the start of the pandemic. Among nonresidents, 618 of 798 cases are still considered active, state data showed.

The state reported 17 new cases among Fairbanks residents plus one involving someone from North Pole. Two residents of the Yukon-Koyukuk Census Area and one resident of Delta Junction tested positive as well, data showed.

Elsewhere, Juneau saw six new cases among residents while two people from Sitka also tested positive. Additionally, the state reported one case each among residents of Utqiagvik, Douglas, Ketchikan, a smaller community in the Prince of Wales-Hyder Census Area and the combined Yakutat and Hoonah-Angoon region.

Of the 86 new cases among residents reported Saturday, 32 are in their 20s and 17 are in their 30s, continuing a trend of higher case numbers among those age groups. The rest of the cases involve four children under age 10; 10 people between ages 10 and 19; seven in their 40s; nine in their 50s; four in their 60s; two in their 70s; and one 80 or older. Half are male and half are female.

The new cases come a day after the state reported 107 new cases of COVID-19, including 80 cases for the Municipality of Anchorage, which local health officials attributed in part to a lag in reporting data.

Daily case counts were lower across Alaska over the past week, which health officials partially attributed to a decrease in the number of daily cases in Anchorage after the city instituted mitigation measures.

The city is about halfway through a “four-week reset” period that closed bars to on-site consumption and limited restaurants and breweries to outdoor or takeout service, while also limiting gathering sizes. The monthlong restrictions are intended to slow transmission of the virus and help protect hospital capacity.

On Friday, Anchorage health officials announced that the city had 289 new cases between Aug. 6 and Wednesday, compared to the 443 cases in the week before.

While the total cases did go down compared to the week prior, Anchorage Health Department medical officer Dr. Bruce Chandler said it’s not clear that the city is yet out of the “COVID storm,” and he added that the virus is still widespread around Anchorage.

The week saw new cases of COVID-19 in a variety of settings statewide, including 19 workers at a mine in Southeast Alaska; six family members in Whittier who live in the same building as 85% of the town; five passengers on an Alaska Marine Highway System ferry who were “likely infectious” while traveling together on the M/V Matanuska; and a crew member on the LeConte ferry.

Additionally, the total number of people with COVID-19 at the Anchorage Pioneer Home was up to 12 by Friday, including 10 residents and two staff members.

Testing of both residents and staff is ongoing, Janet Johnston, an epidemiologist with the Anchorage Health Department, said Friday, so there will likely be more cases reported at the facility.