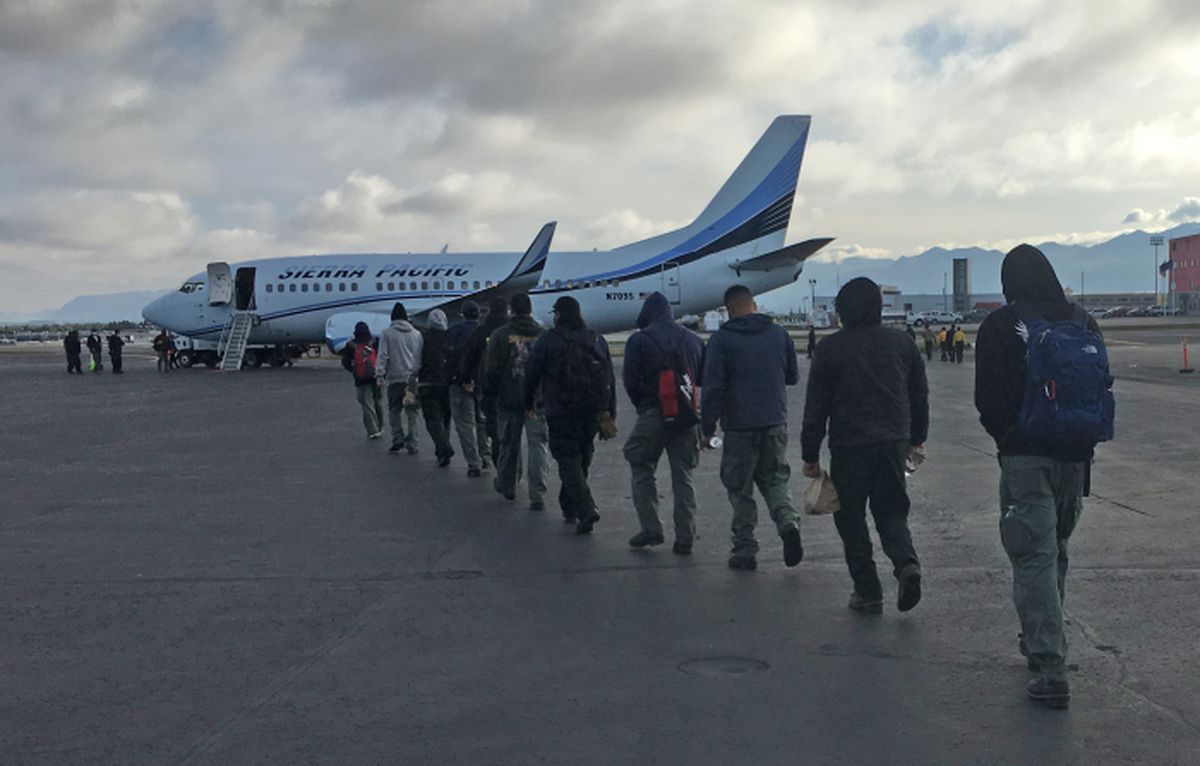 Alaska firefighters walk to a chartered jet in Anchorage on Aug. 28, 2020 that would take them to Colorado to help with wildfire response. (Mike Trimmer, Alaska Division of Forestry)

Alaska firefighters walk to a chartered jet in Anchorage on Aug. 28, 2020 that would take them to Colorado to help with wildfire response. (Mike Trimmer, Alaska Division of Forestry)

Most of Alaska’s wildland fire crews are helping fight fires in the Lower 48, including blazes in California and Colorado that have triggered evacuations of thousands of people from their homes.

The travel is nothing new — Alaskan fire crews have been helping Outside for decades — but this year firefighters are not only trying to contain fires, but they’re also hoping to keep COVID-19 contained to prevent an outbreak that could bench the much-needed fire crews.

Four firefighters were diagnosed with COVID-19 while working to extinguish the flames on the Cameron Peak Fire in Colorado, said Michael Trimmer, who is coordinating three of the Alaskan crews as they attack wildfires in Colorado. Although none of the cases involved the Alaskans, Trimmer said it’s nerve-wracking to think about his crews contracting the virus.

“We’re really trying to take extra precaution so that we all come home safe and everybody can go home to their prospective villages and communities,” he said.

The Alaska crews are operating as family units and wearing masks when they’re near any other groups, Trimmer said. They were flown to the Lower 48 on planes with socially-distanced seating, carrying roughly half of the passengers they could normally hold, said Ipsen.

And the normal creature comforts provided to wildland fire crews in the Lower 48 are fewer this year, Trimmer said. During a normal year, crews camp in a football field or crowd in a school gym. This year, he said the crews are spread out and camping far from each other, which more closely resembles how crews work in Alaska. Trimmer said his crews prefer it that way.

“A lot of them live a subsistence lifestyle and they don’t handle sack lunch after sack lunch too well,” he said. “I think it’s kind of a shock to them initially.”

This year has been especially devastating for wildfires in the Lower 48.

More than 1.8 million acres had been damaged by wildfire in California by Sunday, according to state data. Seven people died during the fires and nearly 4,000 structures were damaged. This year’s fire season includes some of the largest wildfires in California history.

Trimmer said he could easily see the fires in California this year consuming more acres than ever before.

Colorado has also seen some of the biggest recorded wildfires this year, with more than 209,000 acres burned, according to the state.

Trimmer said he’s seen longer and more severe fire seasons in years past. Many of the fires in California and Colorado were in old forests with dead trees that were destroyed by beetles, he said.

“Those forests are old and diseased, they’re just more challenging,” he said. “And you add a steep inaccessible terrain and we’re very limited on safe access.”

Trimmer and the three crews he oversees began their assignment in Colorado at the end of August. Crews typically deploy for 14-day missions and work long days, often spending 14 to 16 hours a day working, Trimmer said.

Alaska’s wildfire season generally wraps up in mid July to mid August, just as fires are beginning to spread in other parts of the country. The state lifted burn restrictions last week.

[‘It’s been rough on all of us in a lot of different ways’: Cooper Landing grapples with its third straight difficult summer]

Alaska saw an unusually low number of fires this year, Ipsen said. On an average year, there are about 650,000 acres burned during Alaska wildfires. This year, there were only 181,120 acres burned, said Ipsen.

The quiet fire season comes after one of Alaska’s worst wildfire years in recent history. More than 5,000 firefighters from Outside were called in to help put out the blazes that ended up destroying more than 2.5 million acres.

Alaska restricted burning early in the summer, which Trimmer said he believes helped cut back on the number of human-caused wildfires. Even with the quiet year in Alaska, Trimmer said several crews still arrived from Outside to provide help during the busiest time.

“Even with that kind of a season, there’s not enough of us up there,” he said. “So we’re happy to come down here and help out and repay the favor.”