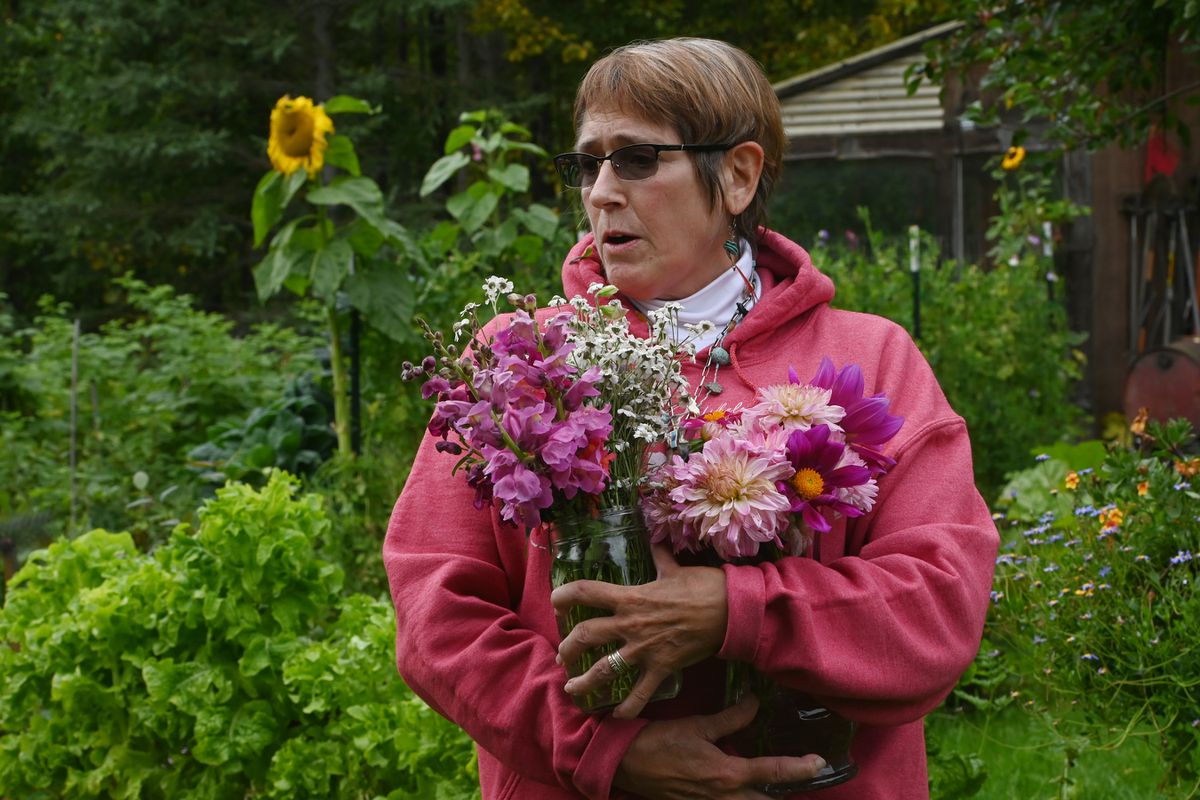 Jeanne Grasser brings cut flowers from the garden at her Sutton home to her mother, Marilyn Grasser, who is a resident at the Alaska Veterans and Pioneers Home in Palmer. (Bill Roth / ADN)

Jeanne Grasser brings cut flowers from the garden at her Sutton home to her mother, Marilyn Grasser, who is a resident at the Alaska Veterans and Pioneers Home in Palmer. (Bill Roth / ADN)

PALMER — Jeanne Grasser’s 88-year-old mother established her Alaskan grit as a teenager in the 1940s, when she moved to a tiny coal town near Palmer to share a one-room cabin with her parents and four siblings.

Marilyn “Sis” Grasser is resilient, her daughter says, but her Alzheimer’s disease makes it hard to explain to her why she can’t walk out of Palmer’s Alaska Veterans and Pioneer Home for lunch or a craft fair.

“She doesn’t understand. She doesn’t retain the information you give her,” Jeanne Grasser said. “Five minutes later she says, ‘Why can’t I leave?’”

Protecting some of Alaska’s most vulnerable populations is proving to be a moving target as Pioneer Home administrators balance policies to halt the spread of COVID-19 with the mental health of residents who need support from loved ones to thrive. The state runs six homes serving nearly 500 Alaskans aged 60 and older in Anchorage, Fairbanks, Palmer, Juneau, Sitka and Ketchikan.

Other COVID-19 precautions within the Pioneer Homes system include training staff about infection control, doing health screenings of anyone entering the building, checking residents for symptoms multiple times a day, discouraging residents from leaving the homes unless absolutely necessary, and testing anyone with symptoms.

“The people living in the homes are at very high risk if they do get exposed to the virus,” said Heidi Hamilton, state director of the Alaska Pioneer Homes division, adding staff have prioritized COVID-19 safety education. “I’m pretty confident that a huge percentage of our residents are doing a good job, just like our staff is.”

Nonetheless, the virus has gotten into several facilities.

Two residents have died at the Anchorage Pioneer Home, part of an outbreak that began in early August and now has stabilized at 19 positive cases, most in residents. A smaller cluster of six cases, all but one in staff, surfaced more recently at the Fairbanks Pioneer Home.

A staff member at Palmer tested positive in mid-August, which is why the facility stopped allowing visitors. That home is monitoring and testing residents, and so far no one else has tested positive, officials said last week.

It’s not known how the Anchorage outbreak began, and “it may never be known,” state health department spokesman Clinton Bennett said in an email. It’s hard to know whether a staff member or resident was the first case, especially with the possibility of asymptomatic cases complicating the question. The first case in the Fairbanks cluster was an employee who tested positive in June.

Measures in place now are reducing the risk of additional infections, and education is ongoing about COVID-19 mitigation, Bennett said.

“One thing that the Pioneer Home System does not want to do is blame or villainize someone for contracting COVID-19,” he wrote.

Testing, one of the state’s strategies to control the spread of the virus, is conducted on residents experiencing COVID-19 symptoms, officials say. If a positive case is discovered in the home, residents are tested once or twice a week depending on their risk of exposure. Testing continues until at least two weeks have passed with no positive cases.

The state has not enacted a universal mask policy within the homes, a practice another Fairbanks care center credits with halting its own COVID-19 outbreak. Pioneer Home officials say they don’t require residents to wear face coverings if they’re not comfortable doing so.

At the Denali Center care facility in Fairbanks, COVID-19 safeguards prompted a “window party” for a resident who turned 100 a week ago.

Mary Cappiello got a cake, cards and balloons on one side of the window. Several staffers celebrated with her. On the other side of the glass were more than a dozen friends and family members, including daughter Caroline.

Her mother moved to the center about five years ago. They see each other using the center’s plexiglass visiting booth. Caroline Cappiello tries to call every day. But connecting is hard.

Cappiello asks the nursing assistant to put the phone to her mother’s ear.

“‘Hi Mom! It’s Caroline. I love you. I miss you,’” she’ll say. “And sometimes, I hear a little bit of a noise, and sometimes they tell me she just pushes the phone back to them.”

The initial outbreak came before the center began mandating masks, Rein said. The staff cases came after the mandate was enacted.

“We have tested all of our residents, all of our staff, and we have not had additional positives. So the evidence shows universal masking is effective,” she said.

Still, Rein said, national evidence shows the level of community spread of COVID-19 might be more of a factor than the quality of a facility.

“I knock on wood, because we’re all vulnerable,” she said.

At the Pioneer Homes, Hamilton said, staff are required to wear masks at all times in the homes. Residents wear masks “when they’re comfortable with it,” she said. The reason a universal mask mandate at Pioneer Homes isn’t feasible is that many of the residents aren’t able to remove their mask independently, she said.

“We don’t want them to have a mask on and choking on something but not able to take their mask off,” she explained. “So that limits the number of people in the homes that are able to wear masks safely.”

She said residents are encouraged to wear masks when they’re going to be in close contact with other people or leave the home.

State Rep. Zack Fields, a Democrat from Anchorage, says the Dunleavy administration should mandate masks in state facilities, especially Pioneer Homes. The governor in July started requiring state workers and visitors to state buildings to wear face coverings when they can’t maintain at least 6 feet of social distance from people not in their household.

“This is not hard,” Fields said last week. “Wear a mask. Upgrade your filters.”

Three of Pioneer Homes are using MERV 13 filters now, according to Bennett: Juneau, Ketchikan and Anchorage. The Alaska Veterans and Pioneer Home (Palmer) has MERV 13 filters on order. Sitka and Fairbanks are both using intake of 100% fresh air with no recirculation.

Given the bans on visitors at some state-run homes, it may be surprising to learn that residents are allowed to move in and out.

State officials say they legally can’t block people from leaving the facility on outings, some of which may be medically necessary. They also say there’s no reason to believe residents leaving the homes have brought the virus in.

It’s not clear many residents do leave — or want to, given the virus-changed world they encounter.

At Juneau’s Pioneer Home, which is open to visitors, administrators say the goal is keeping coronavirus out. But at the same time, residents need to connect with their families, said administrator Gina DelRosario.

“It keeps them hopeful and alive,” DelRosario said.

A group of residents actually took a trip to the local Fred Meyer this summer, with staff members, during the store’s senior hours.

The state’s guidance on leaving the home is clear, yet officials say they can’t really enforce it.

Back in March, statewide Pioneer Homes director Hamilton wrote a letter urging residents not to leave the home where they live as COVID-19 began to take hold within the state.

“The risk of them being exposed to the virus outside the homes has increased,” she wrote. “In addition, the risk of residents bringing the virus back into the home and causing infection in others has increased.”

But during an interview last week, she explained that residents in the Pioneer Homes legally have a right to come and go.

“All people, including older adults, have rights,” Hamilton said. “And so not leaving your home is not something generally speaking that you can mandate for someone.”

At the Juneau home, however, residents making that trip to the store faced a moral dilemma, DelRosario said.

One of the residents was fearful of being recognized and questioned by a family member about why she was out, DelRosario said. The resident decided not to go.

Fear of bringing an infection back into the home, and worry about how community members would respond if they were seen out in public, caused the residents to make a collective decision soon after to not leave the home anymore, DelRosario said.

“It’s like, you’ve been inside for so long, and stepping out and going there for the first time, there was fear,” she said.

Pioneer Homes officials say they are all too aware of the difficulties balancing COVID-19 protections with the mental health of the seniors, especially with the darkness and cold of winter approaching.

Hamilton said she expects the vaccine for the virus — which could start to be available as soon as November — to be “a game changer” for the homes’ vulnerable residents.

[CDC tells states to be ready to distribute vaccines on Nov. 1]

“The other thing that will change things is if communities are able to reduce their cases,” Hamilton said. Her team tracks local alert levels to determine whether a home is relatively safe for visitations, which is why the Anchorage and Fairbanks homes have remain closed: Both cities have more than 10 cases per 100,000 population.

Jeanne Grasser doesn’t know when she’ll get to visit in person with her mother again at the Palmer home. They talk on the phone every day, and other friends and relatives do the same.

But Sis Grasser finds support inside the home too, her daughter said. She sees herself as a caretaker for a good friend next door, reminding her about meals and helping at bingo games.

Jeanne Grasser said she’s grateful for the lessons her mother has provided about surviving hard times and coming out of challenges on the positive side.

“I tell her all the time: Mom, I’m so proud of you,” she said. “To be in this situation, and you’re handling it so well. She likes to hear that.”